Choosing the sector to cover was difficult this week.  I had my eye on 3 in particular based on requests I received and the feel I got from the markets throughout the week.  Consumer Discretionary, Industrials and Information Technology all had some intriguing aspects to them; and if I was going strictly on relative strength I probably would have covered Industrials.  In the end I decided on Information Technology. Not because it is everyone’s favorite, more so because that is where a lot of the growth still and innovation still are; and if the markets are going to forge a end of year rally, I expect them to not only take part, but there is a good chance they take back the leadership role.  That goes against much of the current mantra that we are at the end of this move because technology has led for too long.  Maybe partially because I resist any explanations that consists of too high or too long; really too anything for that matter. Markets like to make fools of those who make these statements, at least in the short-term.

Starting with the Equal Weighted Sector RS Rankings we can see that while Information Technology finished the week right in the middle of the Sector Rankings, it was the sector that gained the most relative strength points over the course of the week.

All it takes is a quick sort by the weekly performance columns to see our focus sector of Materials took the top spot for the week, but Information Technology was in second place.

From the Subsector rankings view sorted by sector and then RS ranking, Information Technology subsectors can tell a story.  IT Services and Software are both in the yellow and moving up a bit this week after coming off strong greens a month ago. Semiconductors were the strongest a month ago, trying to breakout  and when that failed they came down hard into the orange as they try to find some footing.  Then there is Hardware that pretty much lags other technology subsectors in both good times and bad.  Doesn’t meant there aren’t some gems in the Hardware and Equipment subsector, but unless you are lucky enough to take the AAPL approach, margins tend to be pretty tight in a space that remains very competitive. 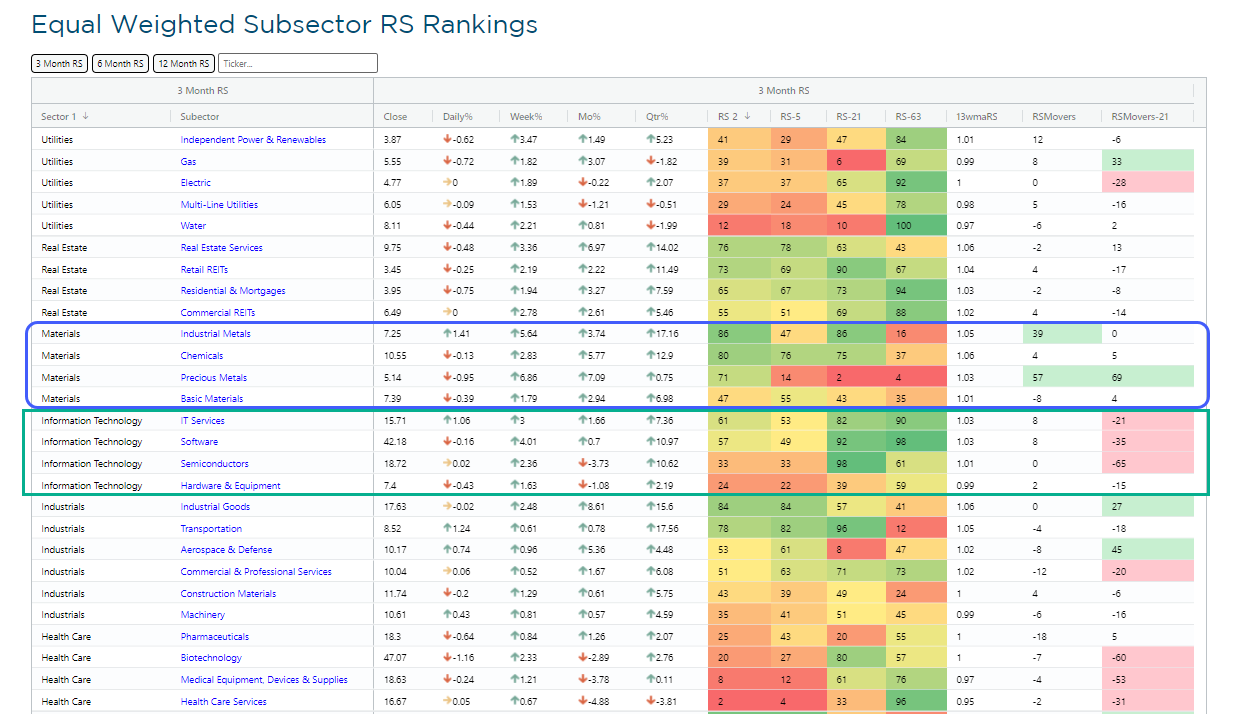 To simplify the RS heirarchy we narrow the list to only the Information Technology Subesctors. Many might be surprised Software wasn’t on top, but the with security and crypto, along with $AFRM, hot right now, EW IT Services hold the top spot.

Sector level equal weight sector RS RSI chart showing a shallow cup and handle typ pattern trying to form. Higher lows on price and RSI are good, but we do want to see RSI clear 60 sooner than later.  RS fadded over September after failed breakout in August. Timing so classic if I hadn’t gotten caught in a decent bit of it myself.  This week’s move hints the sector strength could be returning. 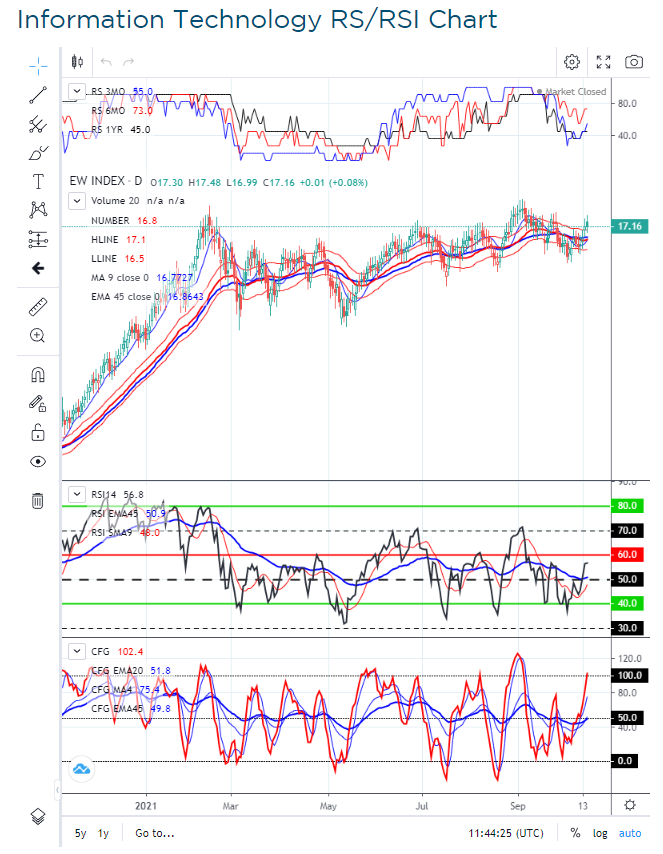 Breadth overall looks similar to the entire universe picture, but slow progression up to this point is just fine. now we need to see some expansion through the short medium then long term measures we in the breadth compilation chart below. In the video we cover more details on these charts to look leadership within the sector. 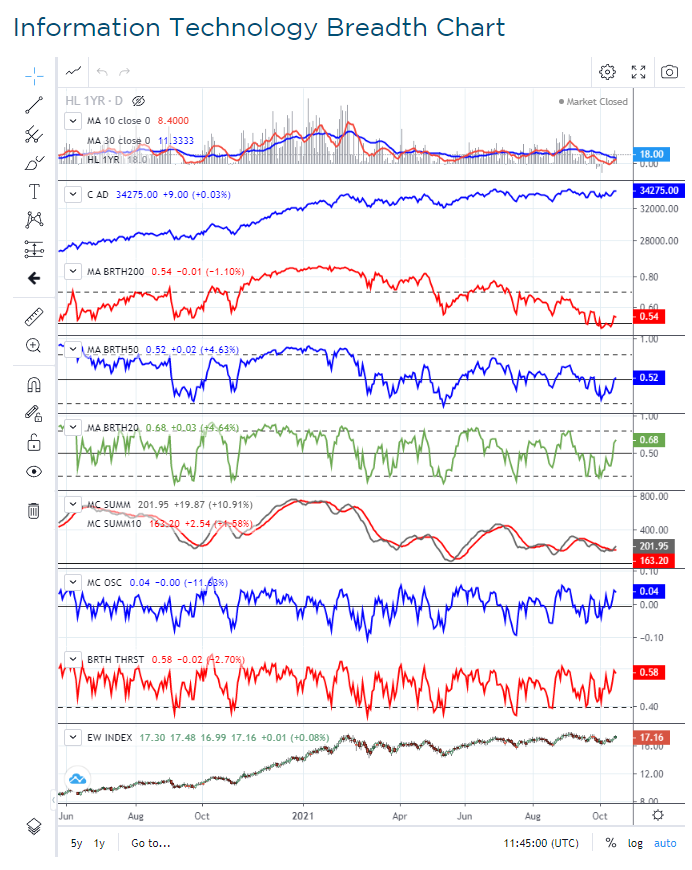 The Relative Comparative message is the bottom formed in mid May and since then we have seen 3 higher lows.  The area boxed shows how the lows clusters across all 3 measurements were strong then completely disappeared on the initial move off those lows. since then it has been building energy just below the early year highs.  The orange arros shows the recent spike in new 10day highs early in this attempt to move higher. 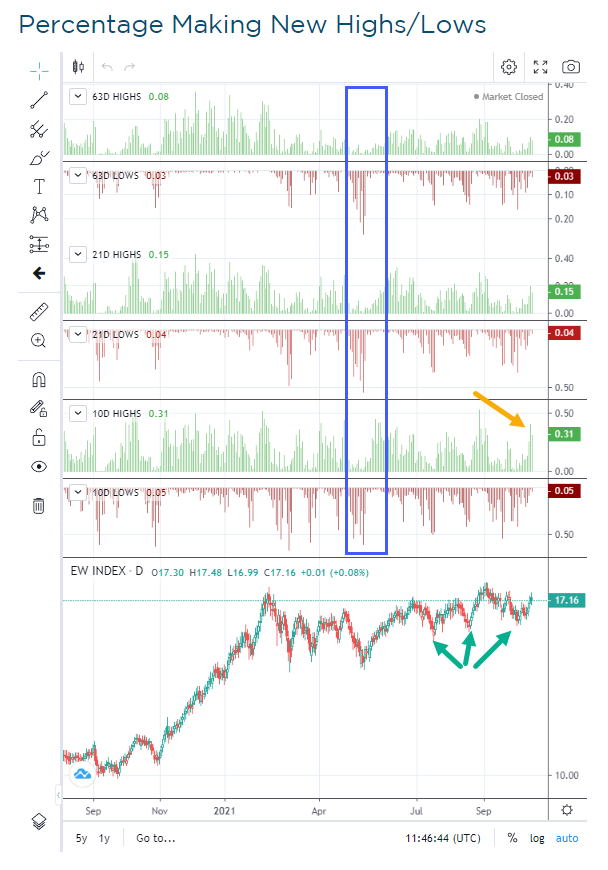 Moving into the RS RSI Charts you can compare both the RS Rankings movement year to date, but also how the price charts and RSI also stack up against each other.  This helps confirm IT Services subsector rankings with the price action and being the only RSI to have already pierced 60 on this trip. The rest still have work to do. 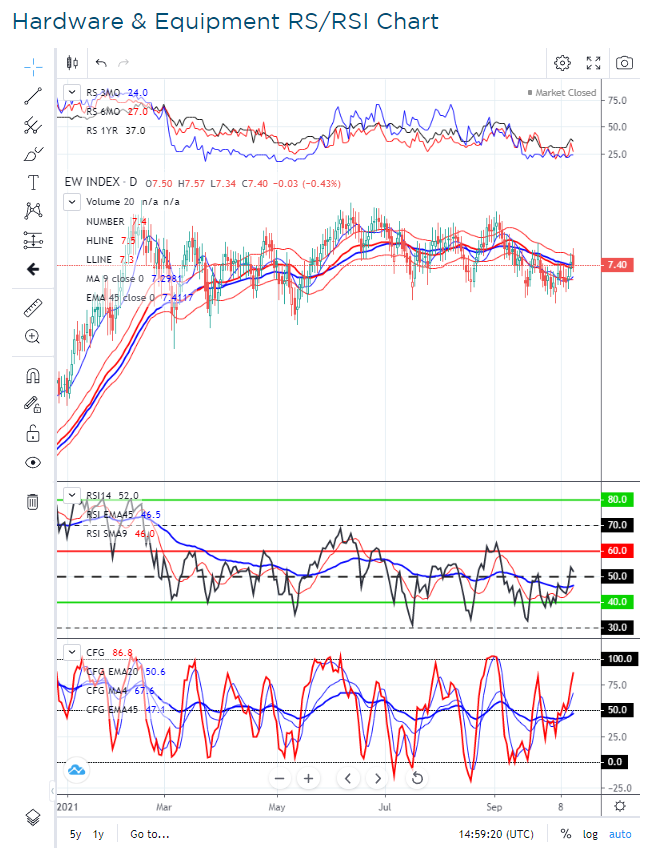 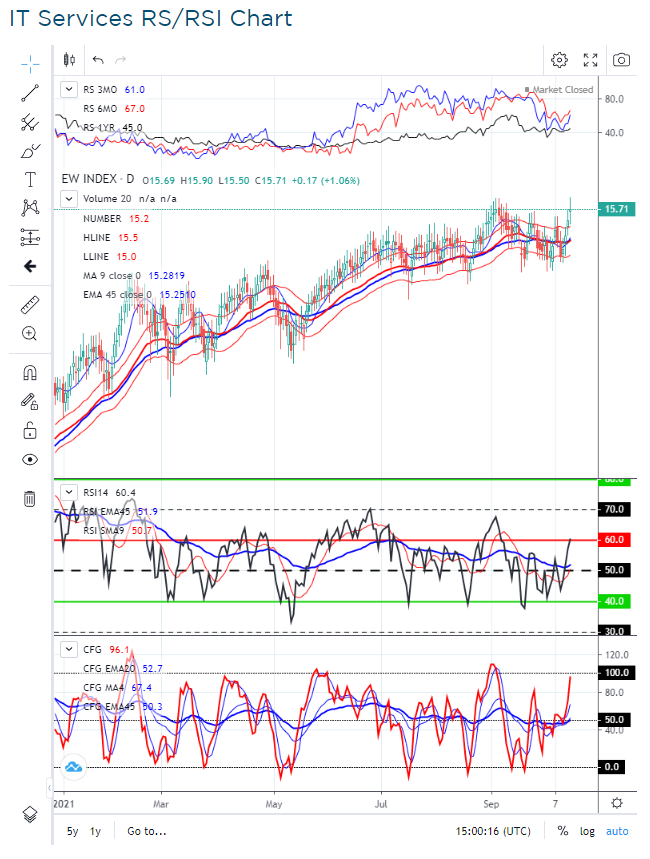 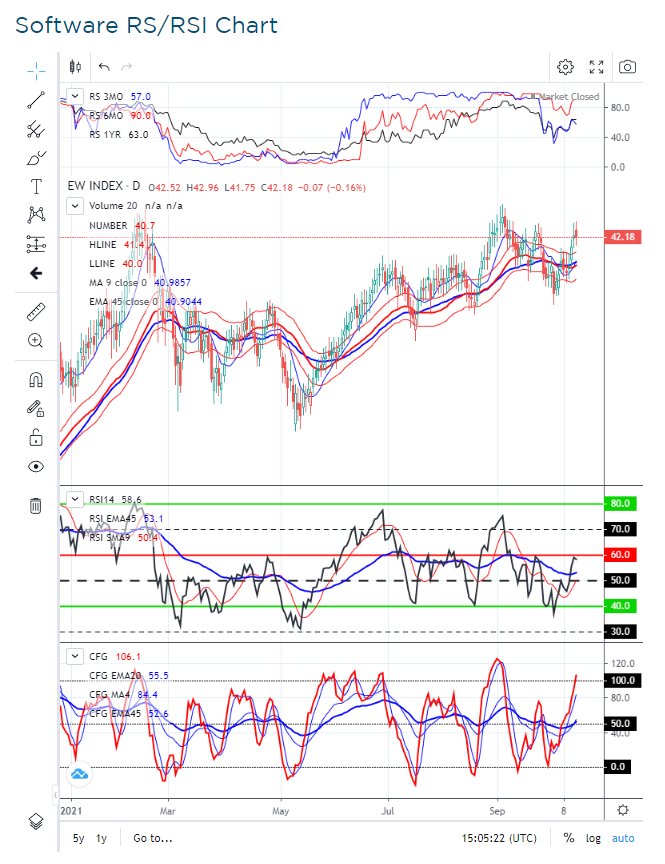 In the video we cover each of the subsectors 4 pillars of relative strength in depth and point out names within each that look worth keeping an eye on this week across many different trading styles.  Some of this potential is predicated on the markets continued improvement across all size categories.  Seeing the $IWM and $MDY move higher out of these 8 month ranges would be a great start.