*Please note: charts are not currently rendering on the site. We are working with a new programmer to resolve, but it will take a bit for us to get them back populating. All of the data is updated daily and tables are accurate, just not visual aids for now. Until then, we will not be taking any subscriptions, but stay tuned for updates as we work through the rebuild.

All three gave back  some of the run off the lows this week. $SPY $IWM are faring better than $QQQ , but none out of the woods yet. Major downtrend remains intact and but $SPY $IWM closed at or better than the 9sma (orange) for the first time this fall. Buyer are trying, but burden of proof is on their shoulders.

The daily view also remains in RSI bear ranges for two of the three.  $IWM is the only one to clear the new bull range and is now finding support  at RSI 50. This has been the early leader off the lows, so it could remain a place for early signals.  $SPY is hanging in there, but not exciting by any means.  $QQQ remains the anchor, but might have put in a short term successful test of the lows at the end of last week. Also worth noting that after RSIs got rejected at 60 in the larger names, they are now trying to find support at RSI 40 hinting that bull range shift may still have near term potential.  Big Tech is the major culprit here, but it can weigh on the indexes for a while. That doesn’t mean there aren’t options out there to invest in.  Just make sure you have a very long or very nimble time line if wading in very deep here.

The mid week rout took this level back into RSI bear ranges as well. There is a lot of potential overhead resistance the buyers need to work through. Again you can see big tech is weighing down $QQQ much more than the other two at this point.

World rankings still showing a lot of bifurcation in these markets with $SPY and $QQQ in the bottom 15.  Leaders putting in solid gains for the week and months in contrast to what we have been dealing with here.

Intermarket RS Rankings are showing a lot of changes this week as denoted by the RS Movers highlights. After seeing equities working up the list in recent weeks, those ranks were mostly lost in the mid week pullback giving the metals an opportunity to make their move.  Commoditiy dominated list with both the dollar $UUP and equities backing off with the fresh inflation news.  We want to see all the equity proxies move into the top half of the list before we expect favorable markets to sustain any moves.
Size and Style remains value to growth  Mega growth finally taking the brunt of selling.

The Power Universe equal weighted sector rankings also showing some moves this week. Over the last week Materials have made the largest RS move with the help of the metals, but as we will see below, all the subsectors are shaping up when it comes to their breadth readings.  Energy, Materials and Industrials are the current leaders with Financials trying, but as with Industrials, it’s more segmented movement in certain subsectors within the sector.

Short term breadth got very hot to the upside prior to the FED meeting. The selloff didn’t bring too much carnage, more backing off of the quick run from the lows.  Now we see which sectors can hold best and which give up quickly. 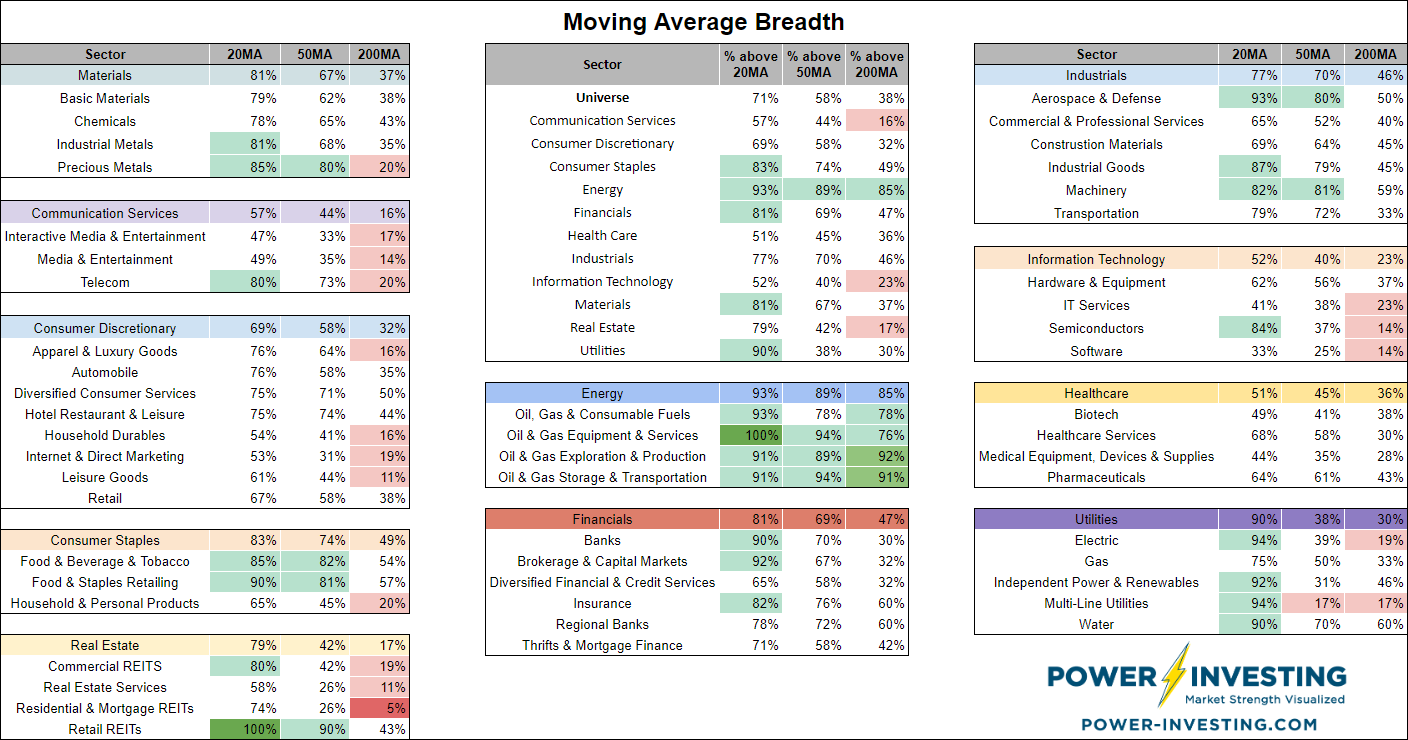 In a bifurcated market like this one we are going to have winners and losers. Here we look at the top and bottom RS Sectors. Energy and  Industrials  putting in strong showings in the leaders. A couple of bright spots in Consumer Discretionary as well might be worth exploring more. On the loser side, it is the usual suspects in Tech, Communications and Discretionary where the inflation concerns continue to reap havoc.  There is no real reason to chase bottom sectors until they show some relative life.

Another way to look at these subsectors is from a RS movers standpoint.  The two tables below show the RS gainers and RS Losers from the last week.  Here you want to look at both RS movement and then absolute RS scores to find areas that are moving different than the rest of the market.  This week Materials have got my interest this week, so I will try to review a few opportunities there soon.

There is a quick top down review from a relative strength perspective to get the week started off. Remember that this is just as start, and even though the charts aren’t rendering on our pages right now, all the table and links are updated daily and working well. If you are reading this on our site, the menu at the top can take you to any sector or subsector page where you can get insight into sector ETF as well as RS rankings on all the holdings with links to tradingview.com charts.  I can’t wait to have our charts back working, but until then, there is still plenty to help us focus in on the right opportunities in any market…

You can find these and other charts on our Stocktwits and Twitter feed @Power1nvesting and throughout this site. Anything mentioned is for education purposes only and are not meant to be recommendations to buy or sell any securities. Please see the full disclosure in the footer for more information.