Same story different week. In reality, as we look at these each week most of the changes we see will not be dramatic. More small shifts and nuances starting to appear within the bigger picture. Top three stay are the same with Energy leading and Utilities and Materials jockeying for the 2nd spot. This week we see Healthcare rebounding strong after a tough previous week.  It was the top gaining sector for the week and still the second worst performing for the quarter. We will look closer at the sector below. Industrials gave up a big chunk of RS points along with Financials with poor performances relative to the markets and other sectors. Financials might be a canary when it comes to interest rates and their next move.  If it remains weak I would expect rates to cool some this quarter which could help bond performance, but also growth Equities like Information Technology and Communications Services. We are not there yet, but worth keeping an eye on these factors and if the rotation continues.

This still look fine from a short-term breadth perspective.  We are consolidating and then finding buyers in most sectors for now.  Consumer Discretionary the most concerning considering on this view as well as the MA Breadth view in the next view. That much pink and red will likely be the first hit if markets do rollover from here. Further broad market progress puts it in the position to play catch-up. But again, we aren’t there yet. So far, the sector is a weak link and isn’t giving many reasons to get involved here. Commodity plays are still strong on both sheets along with Utilities. Real Estate and Consumer Staples breadth is picking up in the last week faster than growth areas; so while we see the market action as constructive, we are still on guard with the defensive nature of this week’s action. We will watch and see if buyers are interested up here now, or if we have to probe lower levels again to entice them into the more growthy spaces. Defensives are working again and commodities aren’t quitting ,so setups in those spaces are readily available until growth sets up at whatever level it decides. 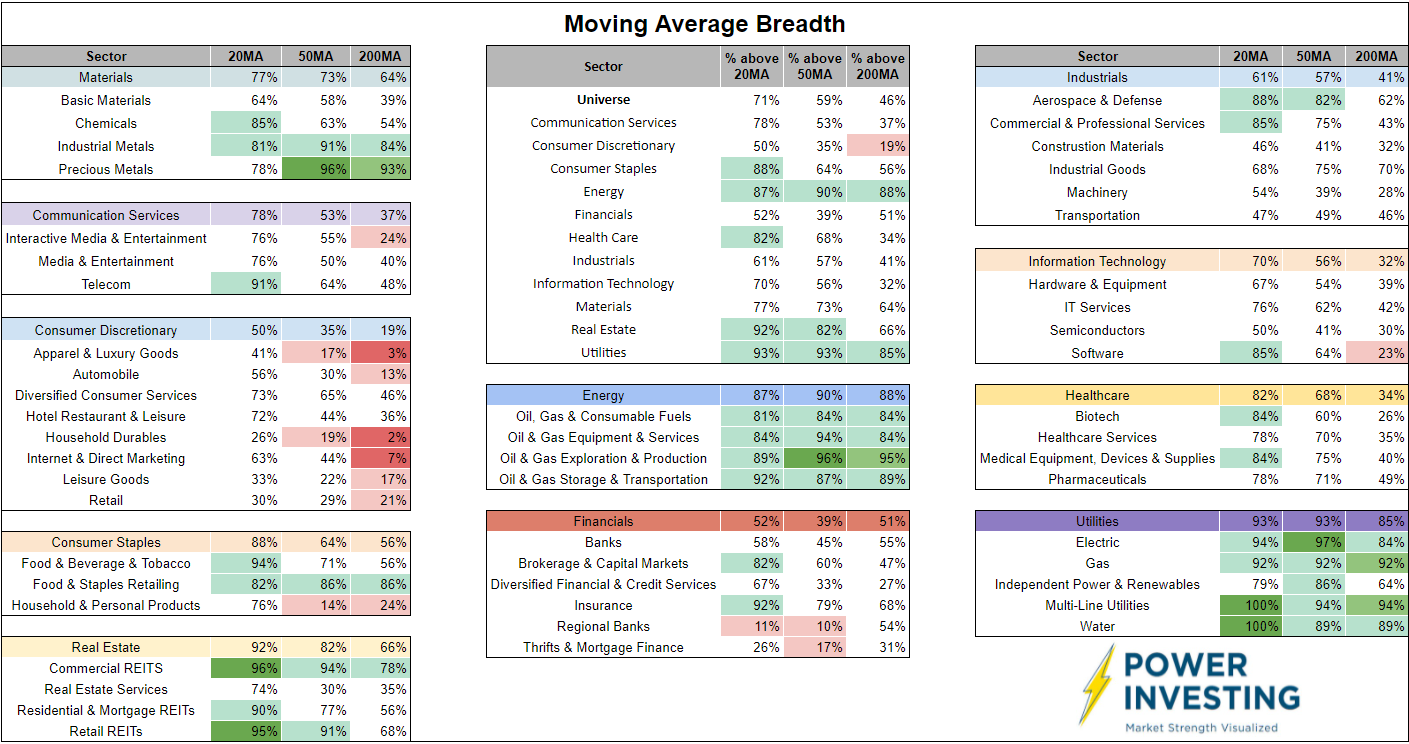 Subsector RS rankings looked similar to recent weeks as well from a top RS perspective, so below we have two sorts to view. First we have the top performing subsectors for the week. This view captures the healthcare move this week pretty well.  Telecom and various REITs were also on the list as investors reached for yield somewhere other than bonds. The second list is the RS Gainers for the week which has some of the same subsectors, but digs a little deeper into the orange RS. One of the stronger ones on tis list at 87 is Industrials Commercial and Professional Services. Its RS progression over the last quarter tells me it could be worth a closer look. Food Beverage and Tobacco is another RS view that I like. Green a quarter and a month ago, turned orange and now back up toward yellow. I know, that sounds funny, but it tells me it was a leading sector (led during the carnage) that pulled back and now may reassert itself. I cover it below in the Subsector highlight section showing just that type of action.

Healthcare is one that has been showing potential for a while, but just hasn’t been able to get any traction until this week. The RS/RSI chart shows the 3mo(blue line) & 6mo (red line) RS staring to move off the floor.  The 6mo is right at the same level they have capped it at a few times this year. It would be nice to get through it on this attempt.  The RSI is nearing a bull range shift which would also help the cause. Well, it would more than just help, it is needed to move to the next stage.  The Breadth view of the sector is just now starting to see some real improvement on the Intermediate measures and strength in the short-term ones. The McClellan Summation Index is nearing a cross of the flatline which would be a welcome change.  It is the long term measures that are still a big drag here for now, but also to be expected after the long stent at the bottom of the RS rankings on all time spans we measure. This base that has been building since January looks ready to give and the PMNHL is expanding on all levels and has reached the highest since November on the 63day measure.  The final view is the relative comparatives which have been flattening for most of the year and now we just need to break out.  The first two measures under price are the most important showing versus the Power Universe and the $SPY, but it can be worth comparing with the $QQQ when you understand that Biotech holds 154 out of the 375 names in the entire sector and many are small caps, so I guess $IWM is worth looking at too.

The sector is not a leader yet, but it is trying to show some strength after a long tough road.  Medical Equipment is back showing up in scans with Biotechnology which have been drags on the sector. Pharmaceuticals and Health Services have been carrying the weight, but may finally be getting some help. 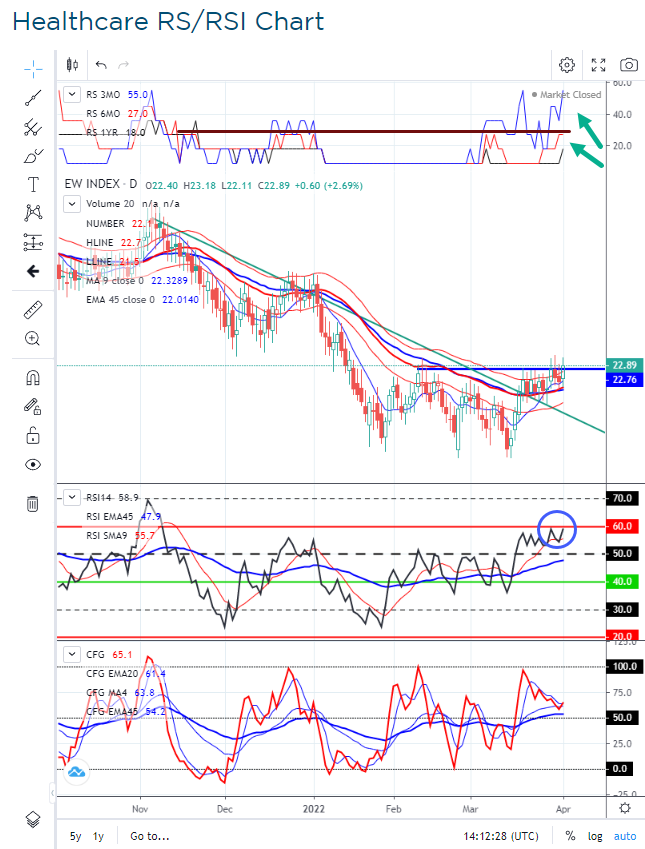 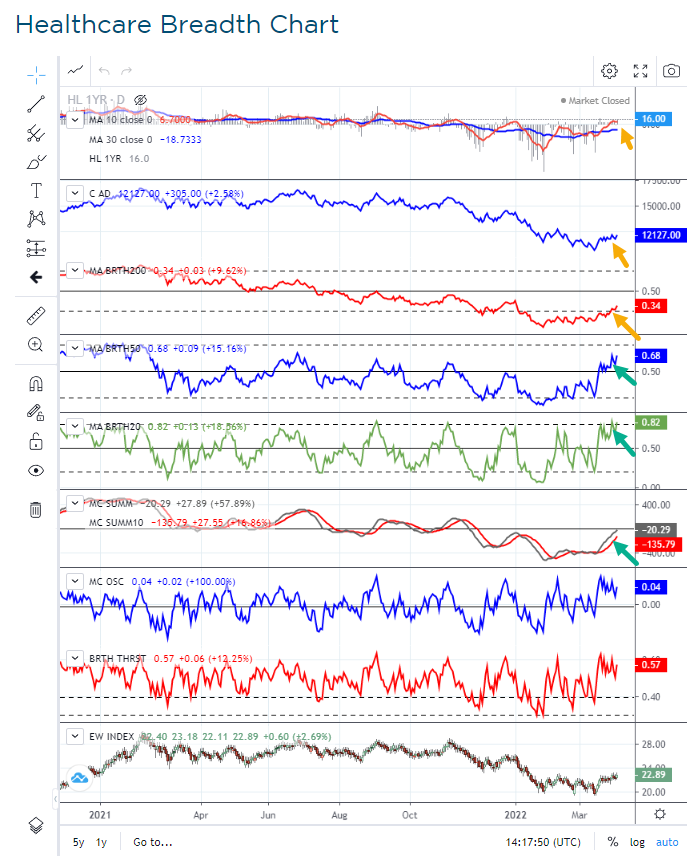 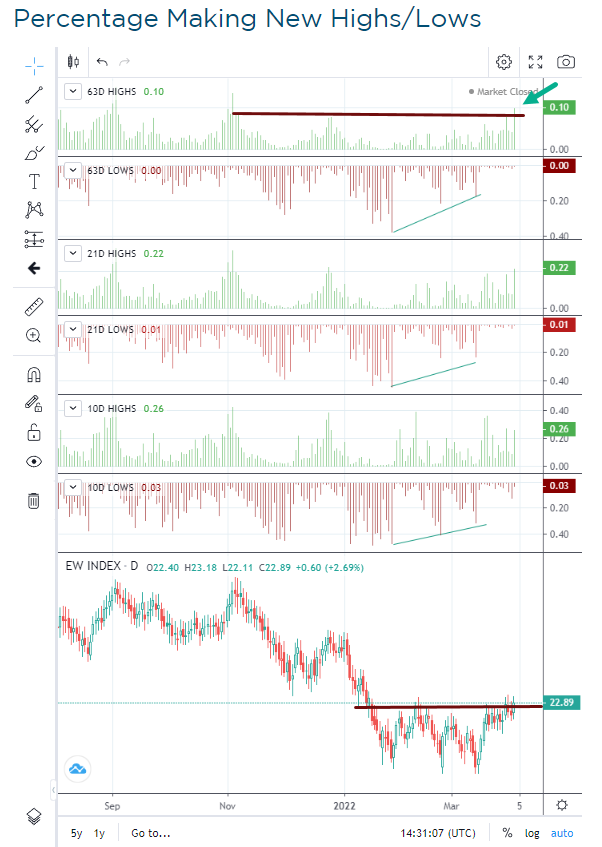 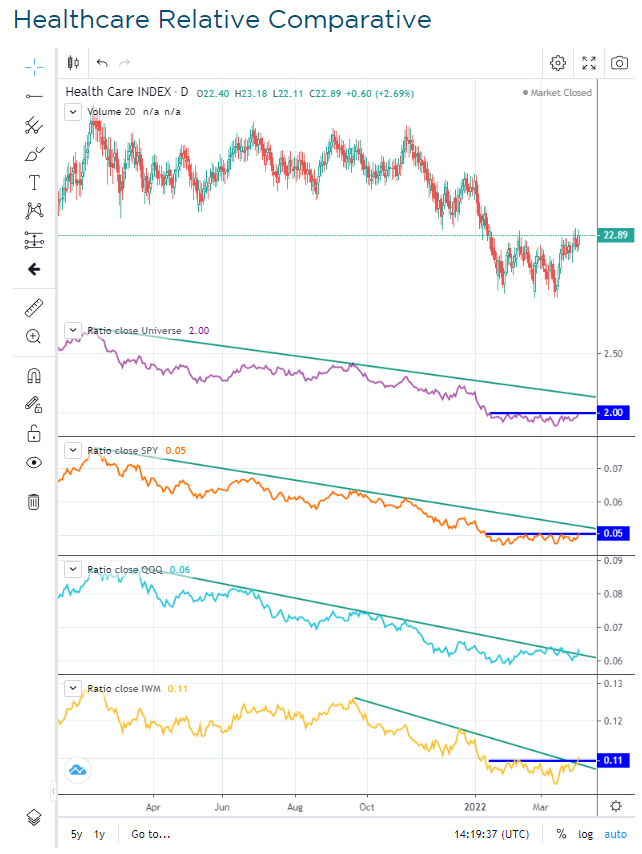 Materials is a leading sector that looks to be flying at half mast right here as the RSI checks back to the 6o level after breaking into the fresh RSI bull range last month.  Breadth in the sector is strong as the only subsector not participating at this point is Basic Materials which is tied to construction, but Chemicals have joined Industrial and Precious metals out performance. The one spot that I want to see break on this chart is the Advance Decline line level that has capped the measures progress since last summer. The PMNHL is not a standout here, but solid.  Finally the Relative Comparative are all showing pullbacks during the recent flag that are back testing important breakouts versus the $SPY and $QQQ ($SPY is more relevant).

A leading sector continuing to make headway and giving us no reason to think the move is over.  Even if the flag fails, I would be watching for a breakout backtest next while the RSI bull range gets tested. The Flag favors higher until it doesn’t so that is the top scenario for now. 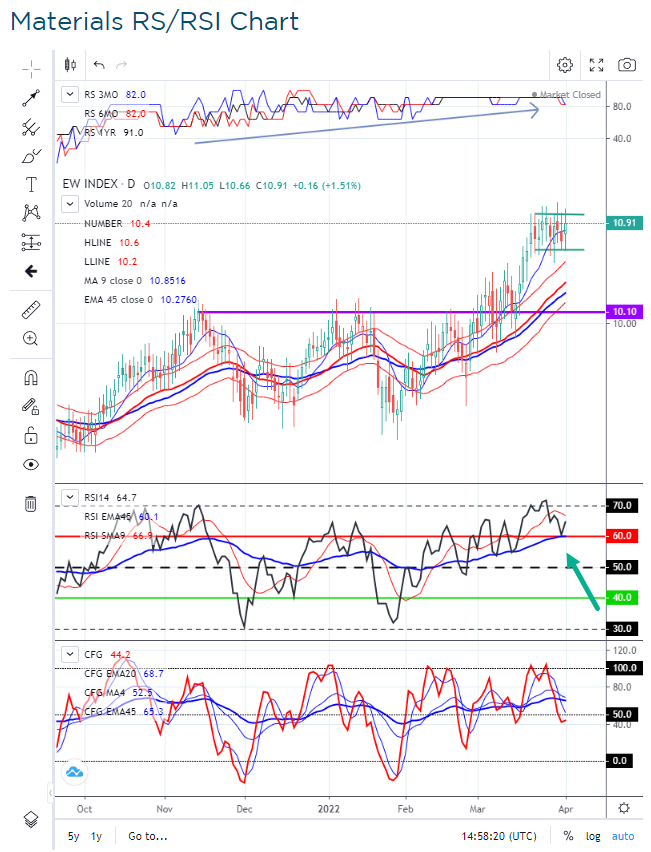 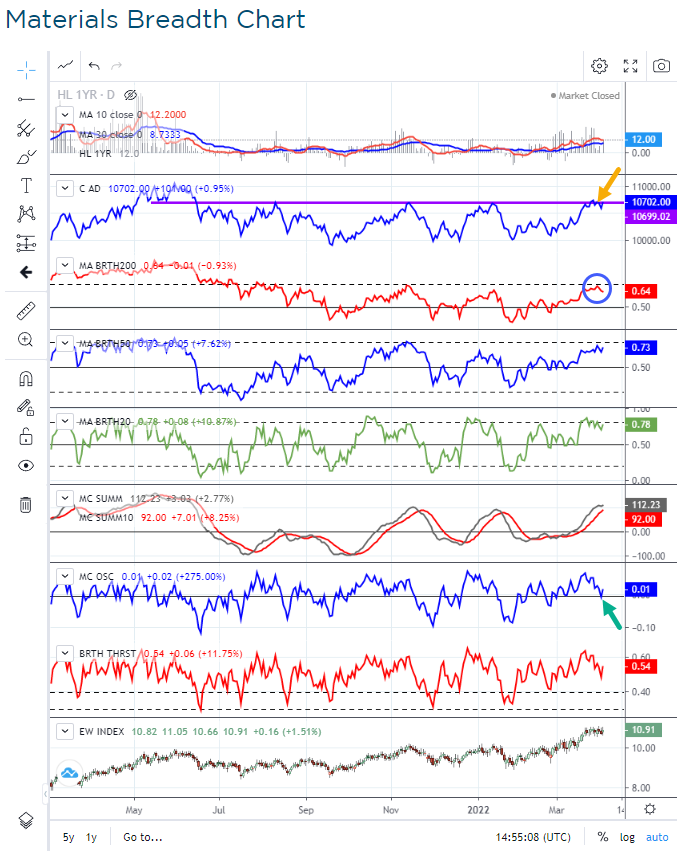 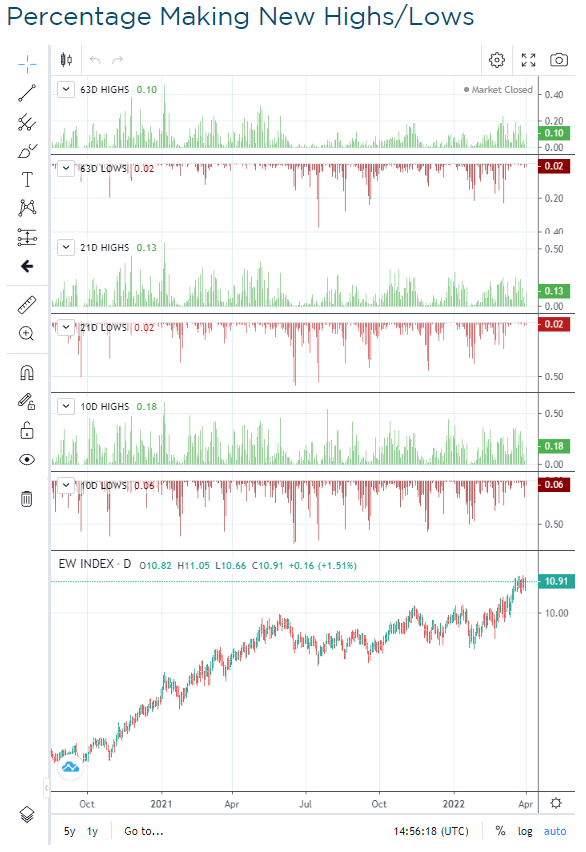 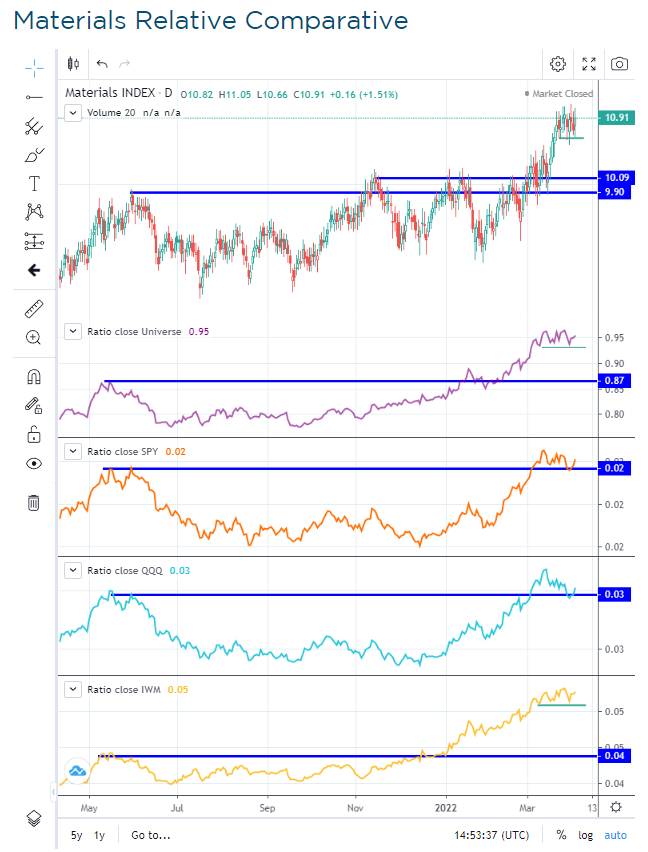 As I mentioned at the top, the Food Beverage and Tobacco subsector caught my eye on the Subsector sorts so I wanted to check my pullback theory. Looking at this chart, I would say it works. The subsector showed some defensive characteristics during the markets difficulties since November, but got hit hard in early March and recovered that finally leg just as fast. During that recovery we see the RSI shifting to a new bull range and the price breaking a long downtrend in effect since last summer.  Now it just needs to break the more important horizontal resistance marked on the RSI chart.  Breath is improving swiftly and all the MA readings are beating the Universe average.  PMNHL all spiked at the end of the week.  The relative comparatives have been improving since fall, but saw a new higher low form on this recent move.  $PBJ is the ETF to cover the space or you can go to the subsector page at the top and look for individual setups going into the week. 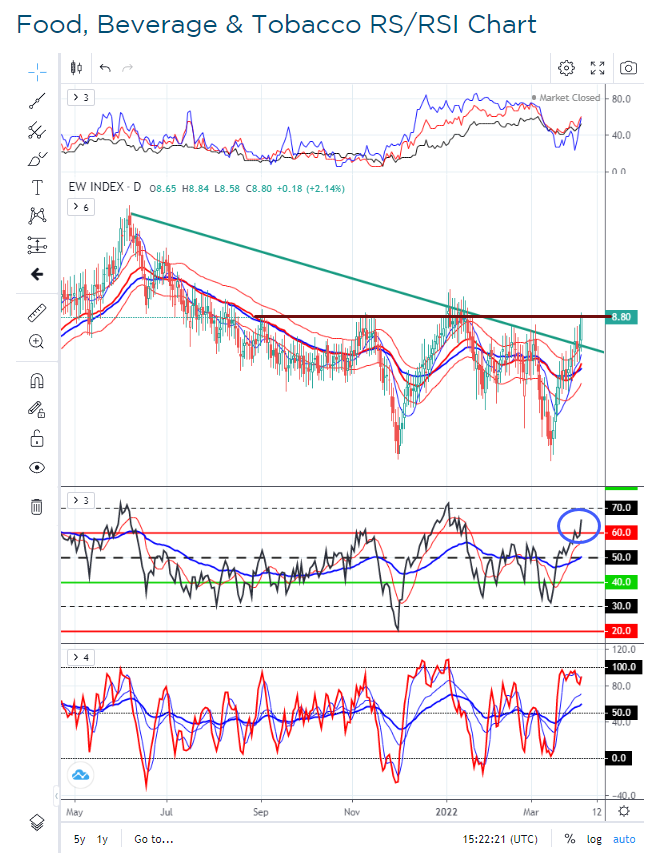 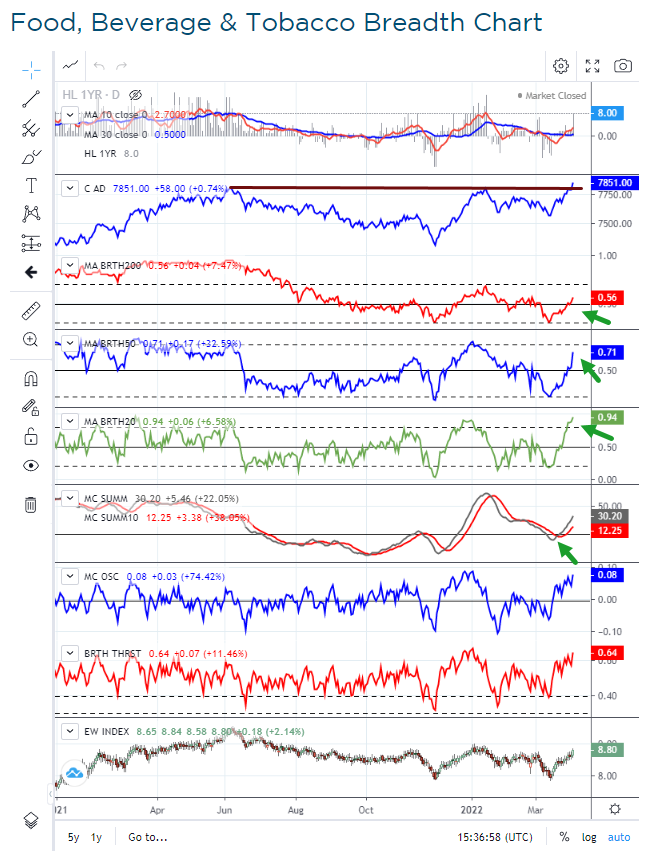 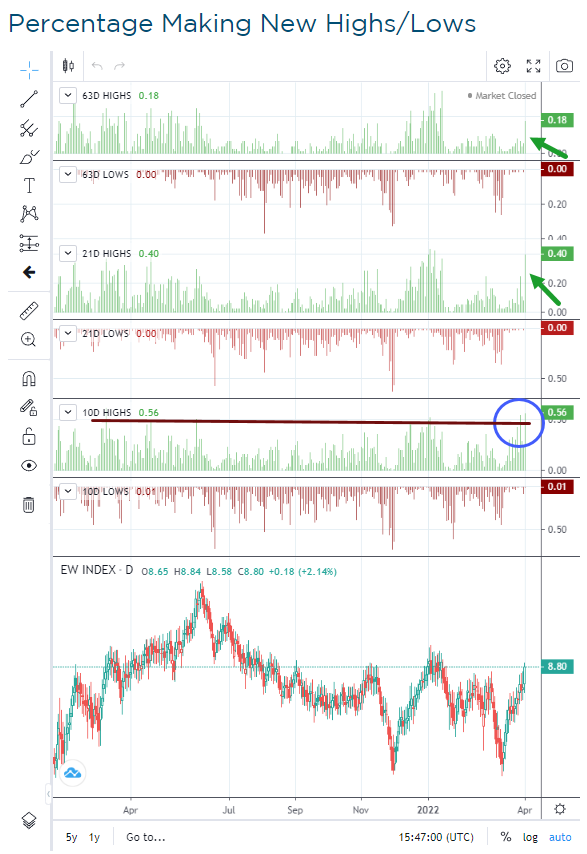 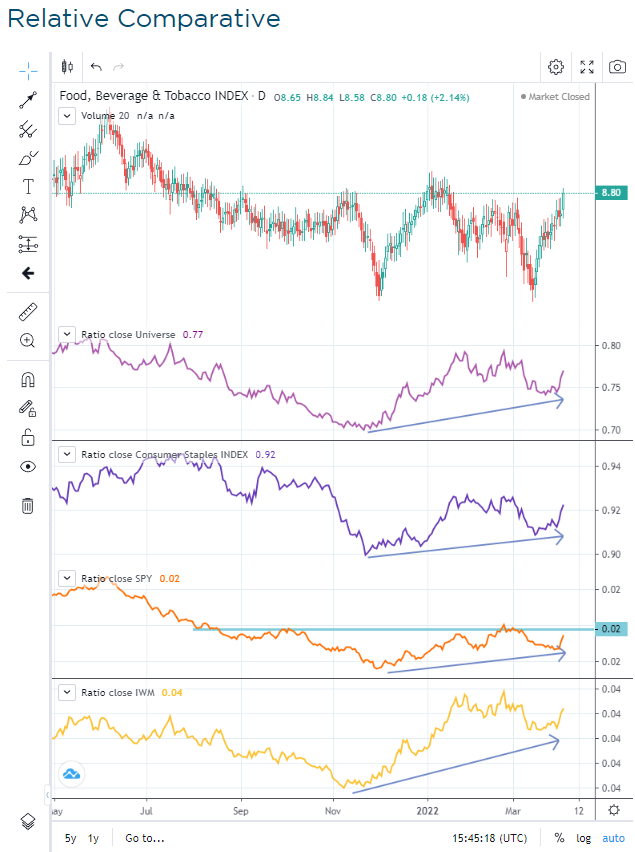 I think we have to still be a little cautious going into the week after a 2-3 day pullback.  The run off the lows was strong and we could certainly retrace more and still be ok, but if sellers get to aggressive again, we have to be open to another test. That seems less likely,  but you never know.  We have spots for all types of markets.  Many defensive spots look decent here and might be the trades for the week whole the broader market wrestles with direction. There are plenty of fishing lanes still open, you just stay nimble for now and don’t push things in the sectors and subsectors that are still finding their footing.  There are too many strong charts in strong subsectors in strong sectors to take part in while waiting.

This covers an  overview of what we are seeing. We will add more color to it in the videos we post througout the week, so stay tuned!