This was definitely a no where to hide week in the markets. As always some outperformed the $SPY and others didn’t.  Outperformance should also be seen in context of the equal weight sectors having a lot of small and even microcap components, so outperformance can be even more significant depending on how small caps are acting as well.

The breadth picture looks rough throughout the market. Thursday saw a decent reprieve only to end the week like this. Many of the defensive spots took big hits this week after holding up well to this point. Utilities being the worst off on the whole sheet. Moving Average Breadth isn’t any better as more red creeps in here each passing week.. Energy, Staples and Materials are still the ones showing the most participation here based on the percentage above the moving averages. 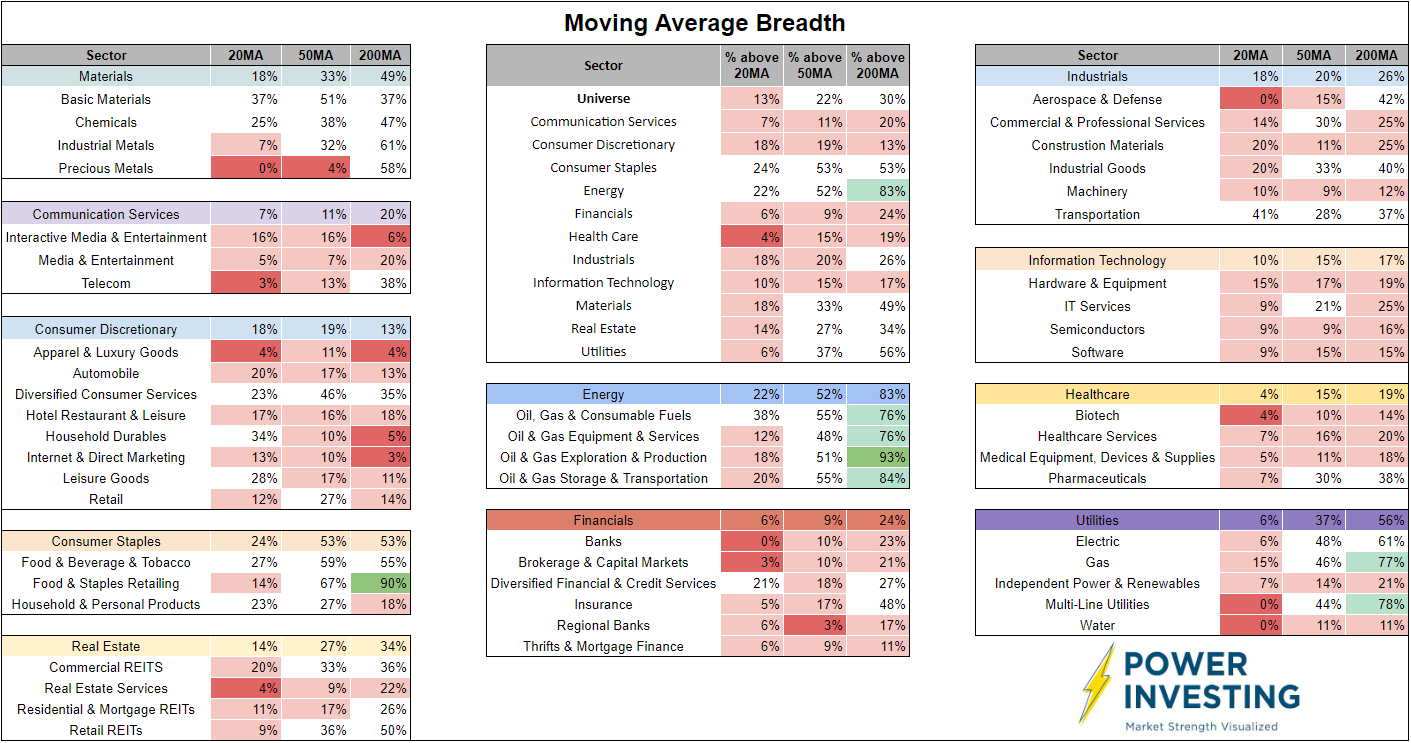 The subsector leader board is little changed with a few new names creeping in on the bottom like Transportation and Diversified Consumer Services.  It is interesting to see the Utilities names still on here after such a rough showing on the short-term sheet. That could be an opportunity worth paying attention to.

The second list is all the subsectors that outperformed the $SPY this week. Only two squeaked out gains, but many outperformed relatively. These are where I would be watching if buyers decide to show up. There are many relative strength subsectors in Energy and Materials that remain on this list, but it’s worth noting all the Information Technology, Consumer Discretionary and Industrials subsectors that are cluttering the list. These are not exactly defensive sectors. 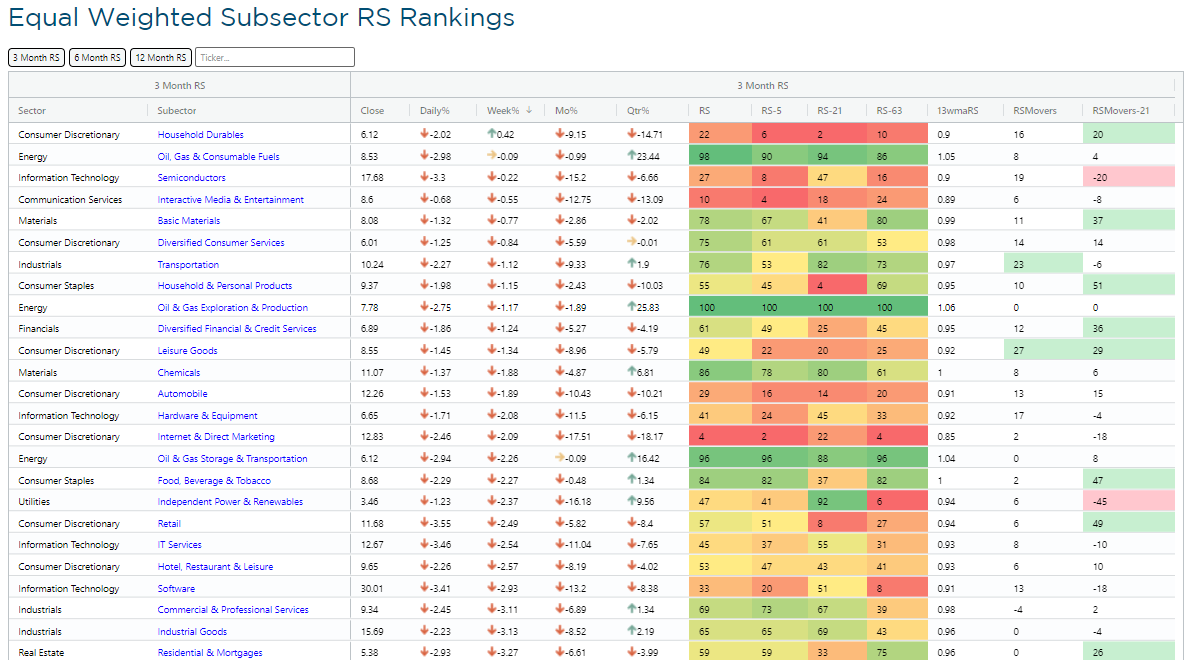 Below are the RS Gainer and RS Loser sorts. The RS Gainers list is also littered with Consumer Discretionary and Technology subsectors. The losers list seems to like Financials and Healthcare. With no absolute winners to speak of, at least this tells us who is moving different from the rest.

Not really loving any of the sectors right now, or anything to be honest. In that light we are going to take a look at the only three subsectors that don’t have any pink or red on the Short-Term Breadth sheet above which was a feat in itself it seems. These are not in strength order, just how they appear on my sheet. Basic Materials, Household Durables, and Transportation. None of this means they are ready to buy, and a heavy market can overwhelm any lower level trend, but let’s take a look, anyway.

Basic Materials is not one you might expect to be leading, but it is one of the few subsectors that is still in a RSI bull range and bounced off the 40 level. Its relative strength is also rising back to the top in the recent action. The subsector breadth is much better than the universe as a whole, but still not great. Short-term breadth measures are doing very well versus the rest of the markets as of the end of the week.

The relative comparatives have been rising since the beginning of the month, even with the absolute weakness the space saw early and mid-month. Also worth noting on the PMNHL we haven’t see the same build and spike in new lows here as we have in many other spaces. This is tied to the construction and housing industry, so any outperformance could be a tell across that theme. 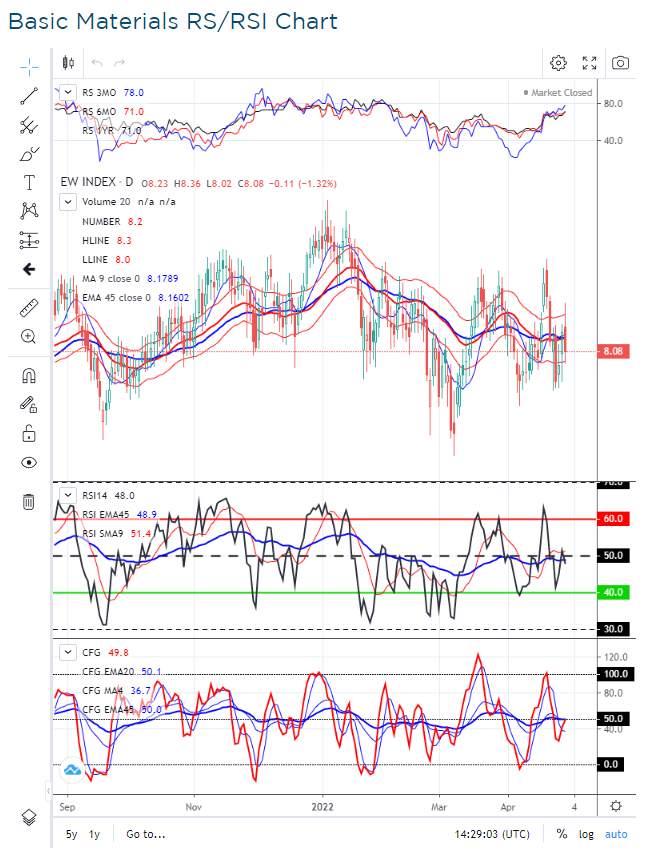 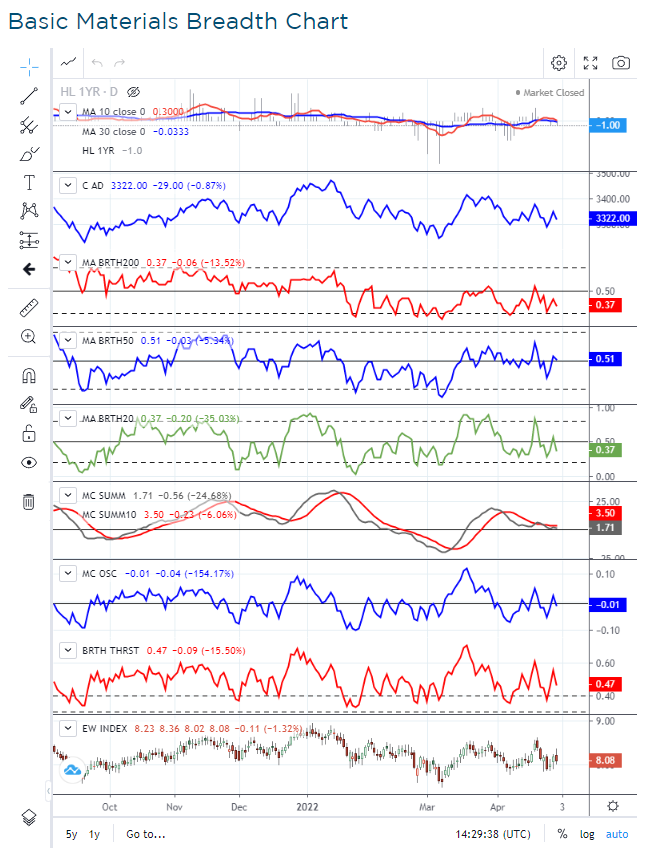 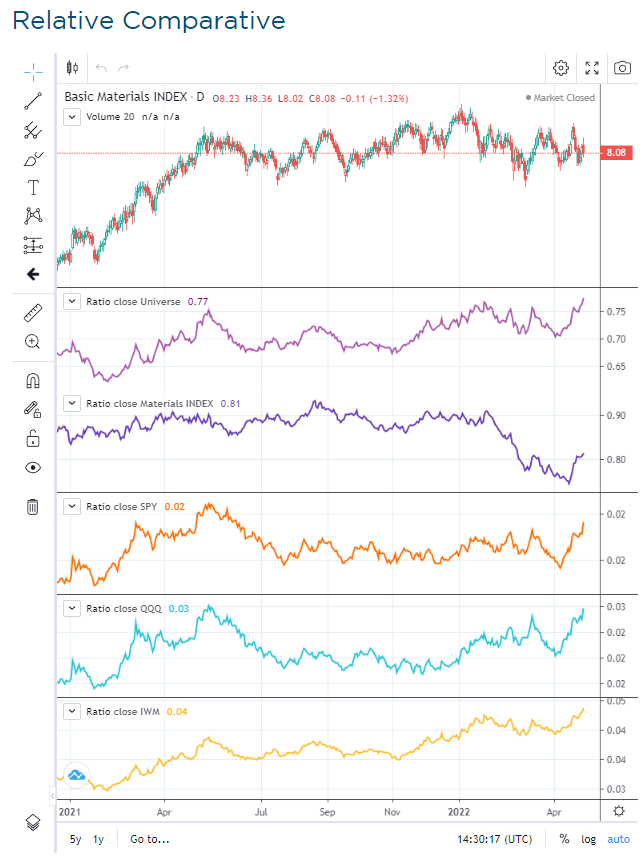 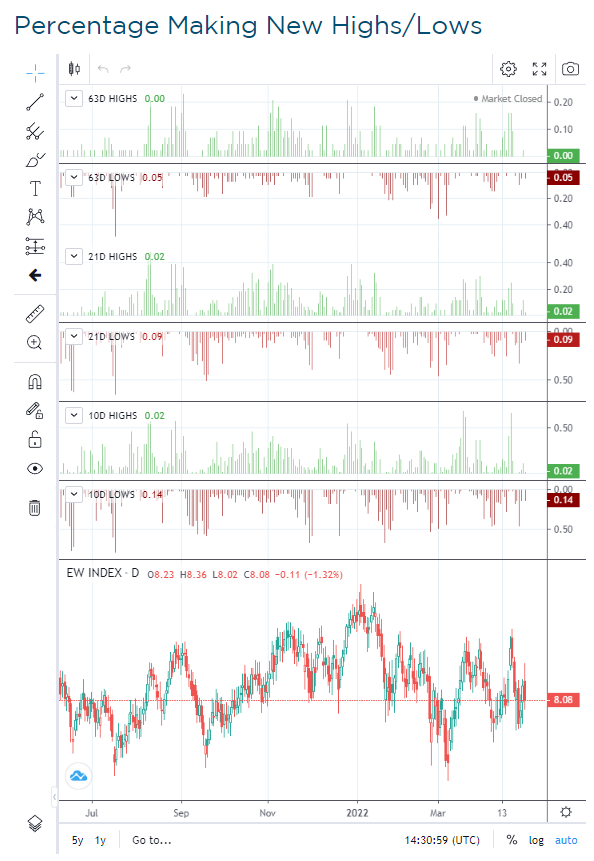 Next we move on to Household Durables, which is in the Consumer Discretionary space, which hasn’t exactly been stellar lately. That said, we see the 3mo RS trying to get off the mat in the top window of the top left chart. This comes after a spending all of 2022 in the gutter for RS so far. This is also where builders, appliances and other housing plays reside, so it is a similar to Basic Materials, but it has a much more direct link to the theme and the chart shows it. With the rise in interest rates, the expectation is housing will do very poorly, so all the companies been getting sold most of 2022, but the last month or so, that started to change. While the rest of the markets had a very rough April, Housheold Durables went mostly sideways and hasn’t really joined in the mess the last two weeks at all. Now it is still in an RSI bear range and below the MA Bands which are finally flattening. CFG is holding high on this last stand. The breadth is still pretty poor on the longer term basis, but looks decent on the short-term measures. Enough to watch for more if markets improve overall.

Relative comparatives starting flattening out just after the first of the month, once price started moving sideways and turned higher from there as the rest of the markets dropped. The PMNHL on the bottom right is also showing a noticeable drop in new lows on all timeframes over the last month as the space has stabilized. All of these signs are very early and ultimately price needs to respond to some of the clues before any big commitments are made; but this is how many early movers can be honed in on. 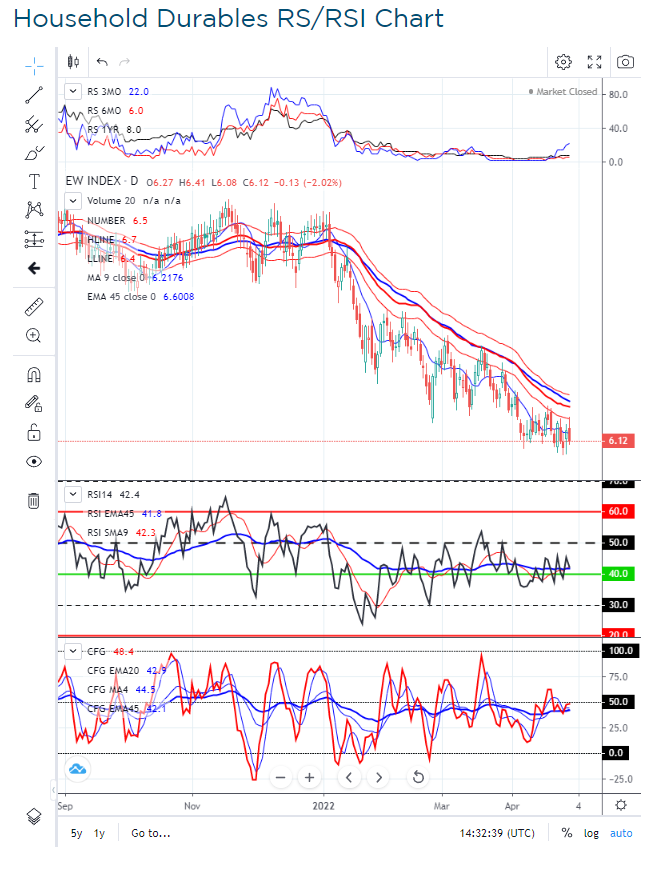 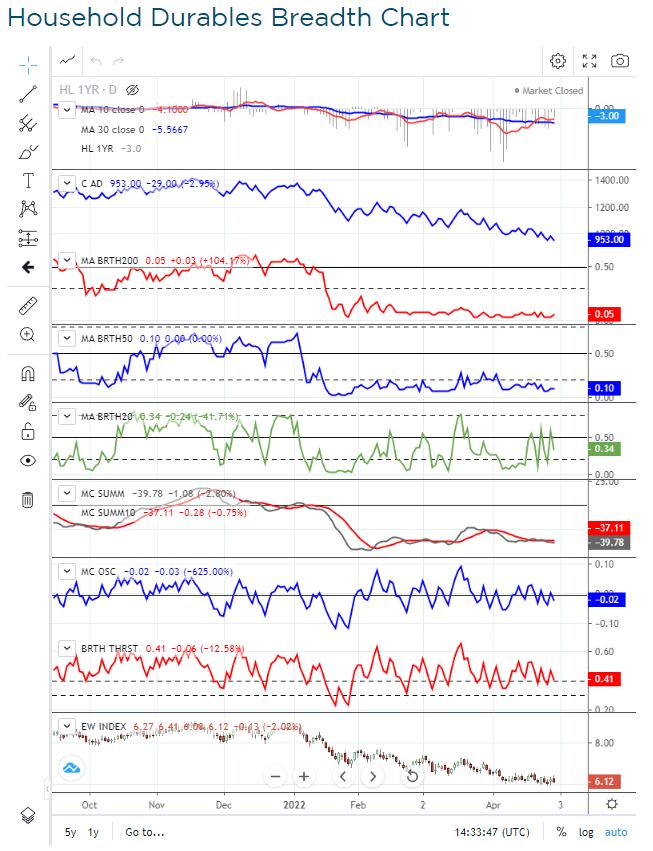 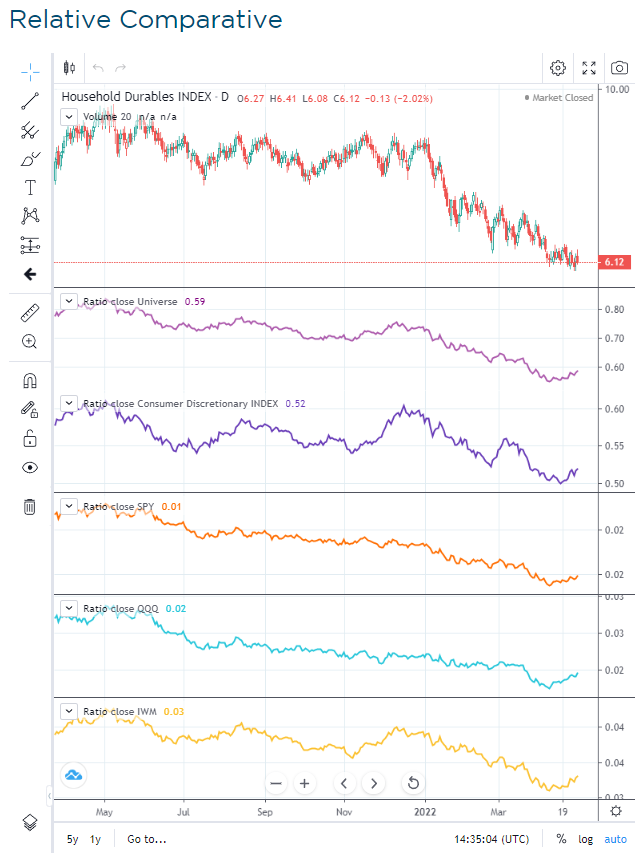 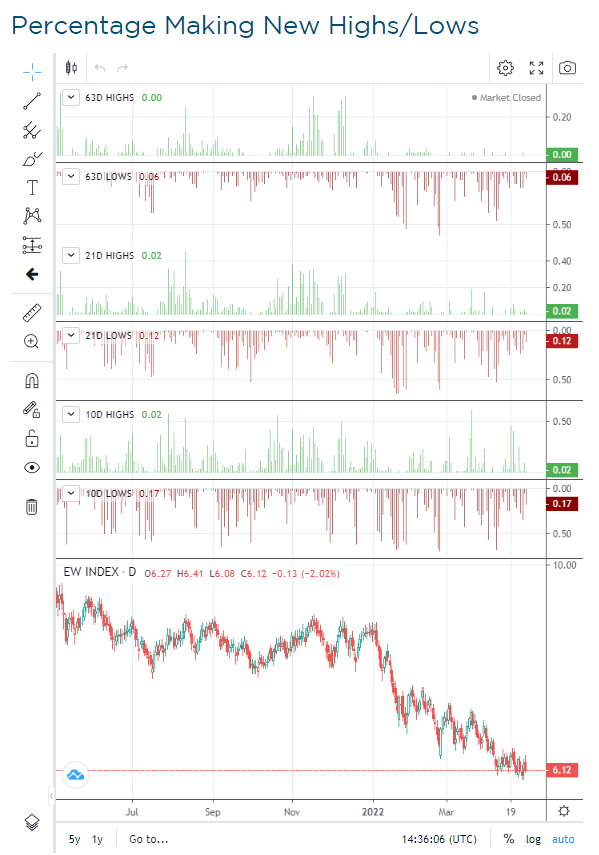 Last we move away from housing and to Transportation. This is a space that was a leader then got raided to end March and start April and has been looking for footing ever since. The chart is mostly sideways since November with no clear RSI bull or bear ranges, every time the RSI would move in one direction it would break the RSI threshold, never establishing a clear trend. It is currently in a RSI bear range and struggling to get back over 50, so there is def0initely work to do if this is going to improve from here and not get sucked into the bear trend. The breadth is better than the universe, but not great. The ntotable again is the short term breadth measures holding us much better than the markets in recent action.

Relative Comparative charts are all nearing tests of the highs no matter which comparative we look at. The PMNHL is much lower on this pullback, but we can’t call it a divergence since price didn’t make new lows either, which is a divergence in itself from Power Universe price action. 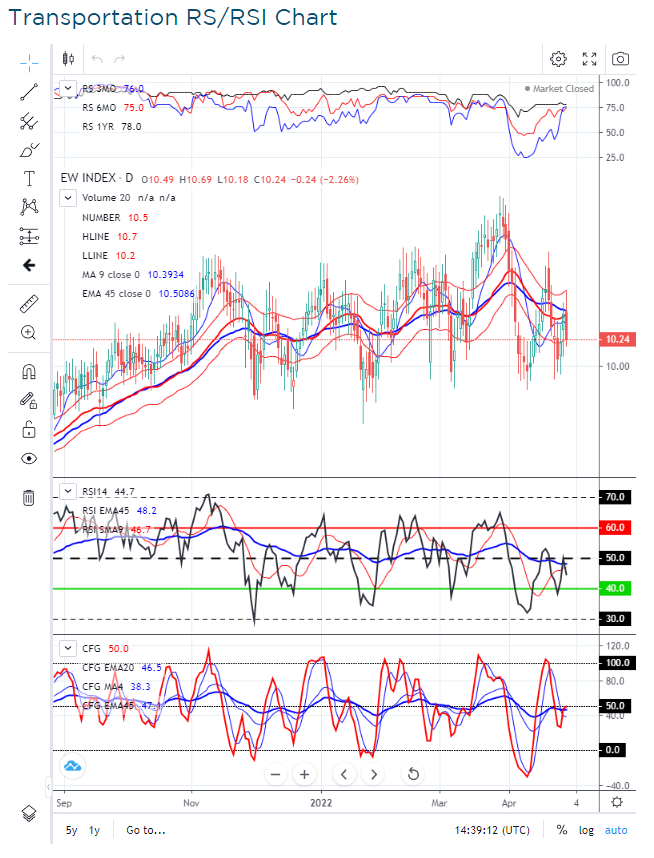 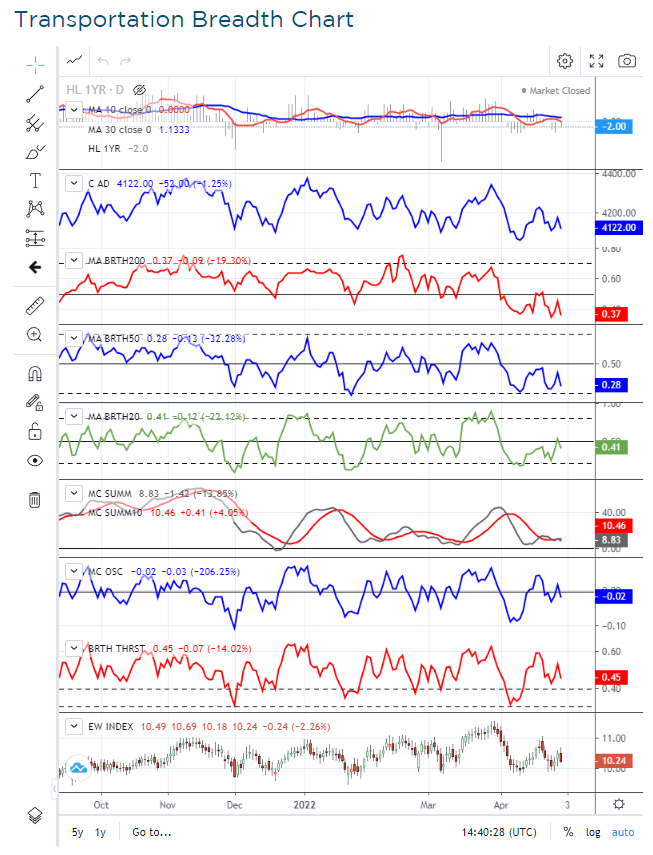 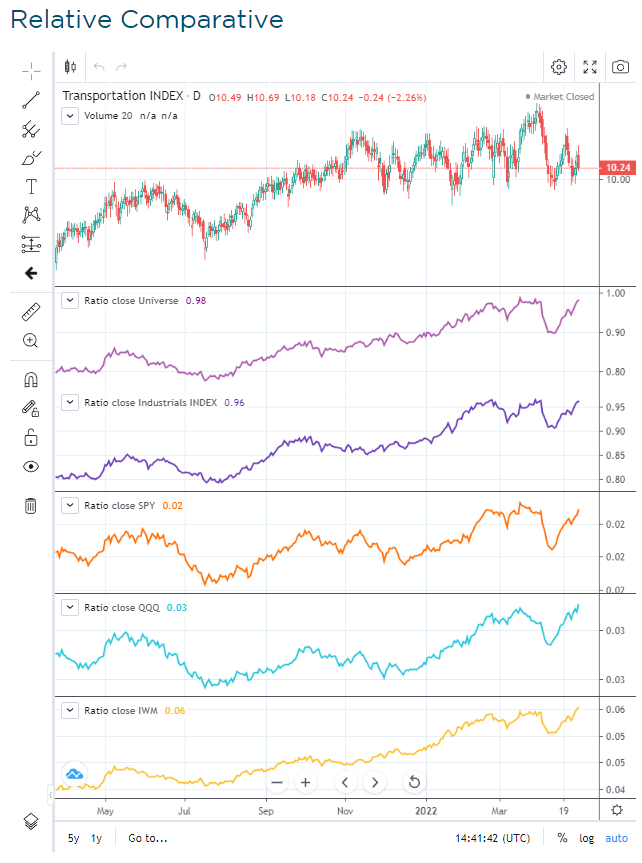 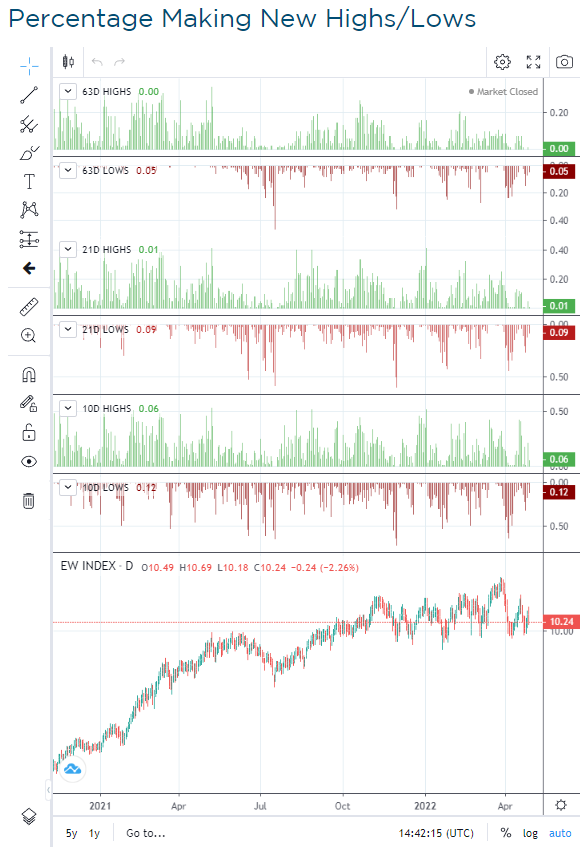 It looks really rough out there right now and the major indexes are not giving any reasons to get aggressive.  Down too much is not a good reason.  That is why we gave many different views this week, but couldn’t find even two full sectors we wanted to profile, but instead had to dive deeper to the subsector level to find something different.  From here you can look at the ETFs that cover these themes or move to the stock level which is on the subsectors page.  In a quick view, I noticed many individua names in each of these spaces that were weekly gainers last week, something no full sector or even subsector was able to pull off. However, it just makes sense we would find more of those gainers if we concentrate on the spaces that outperform relatively even if still down some.

We don’t know when the markets will find footing, but we still need to do the homework to know where money is flowing when that opportunity occurs.