Some pressure coming off the markets as we head into Opex on Friday. Don’t know yet if it will amount to much, but for now we follow progress and see if it can build on itself.  Not a tome of movement in the Sector rankings. Communication Services are trying again here. Financials are notably negative as the only sector that is down over the last 5 trading days.  One sector that is not liking to see yields come off their highs. Energy is showing strength again after an ABC pullback off the recent highs.

We had been noting the short term breadth extremes last week and expected a bounce sooner than later.  The problem was not knowing if our sheet got red enough or if we needed a larger flush to washout everything at one.  We continue to believe in the rolling washout thesis we put forward that subsectors and sometime whole sectors were getting hit individually instead of all at once and that was creating the extremes over the last few weeks. Whether or not that pans out, it is nice to see less red for a bit.

The rub here is the Moving Average Breadth view is not improving nearly as fast. I know that is to be expected, but it reminds us there is still a lot of heavy lifting to do before markets are healed. That may not happen on this up move, but we look to focus on the areas showing the most strength or at least notable progress. Energy and Utilities stand out along with Consumer Staples and non-metal Materials subsectors. 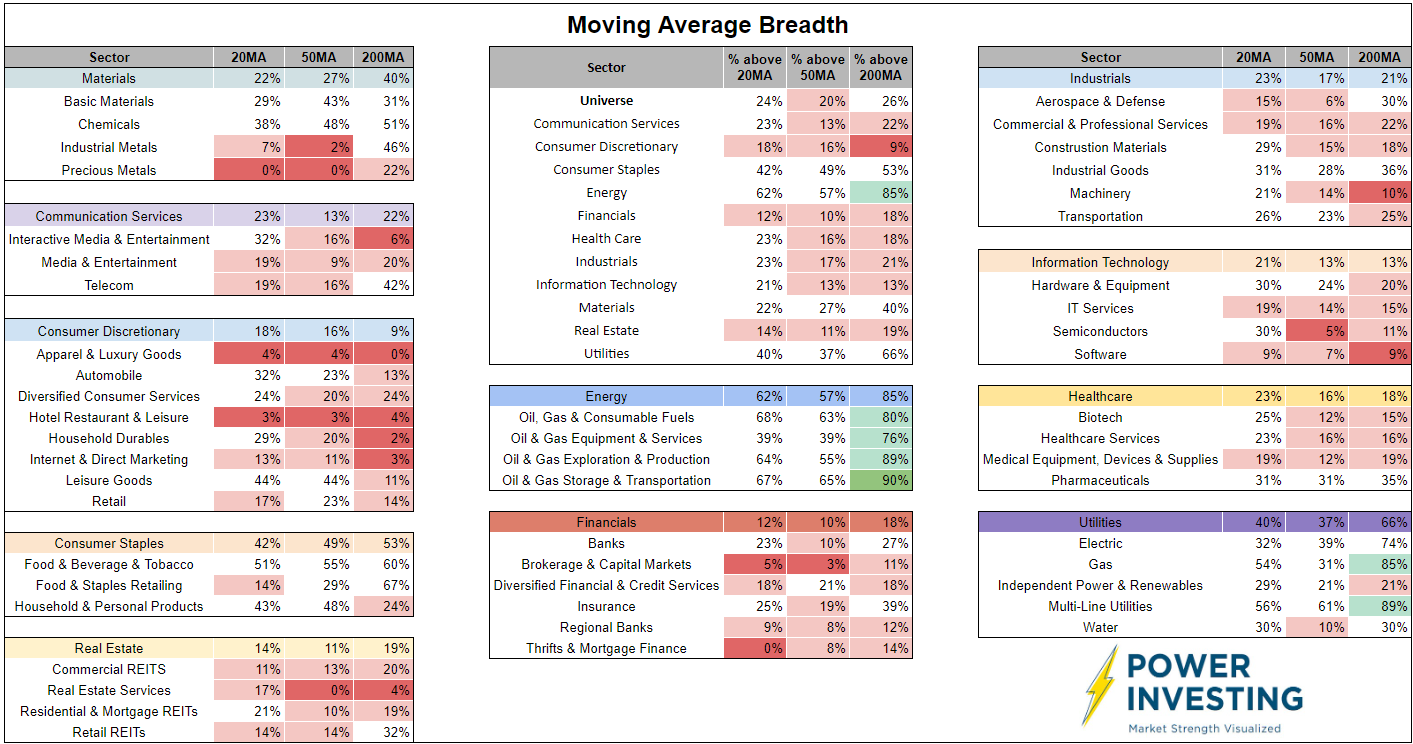 On the subsector level, the first table shows all the subsectors that have outperformed the $SPY over the last 5 days A clear majority of the 51 total. Energy moved back to the top of the performers list across all subsectors, but a strong mix of other outperformed. The broad participation is nice to see off the lows. 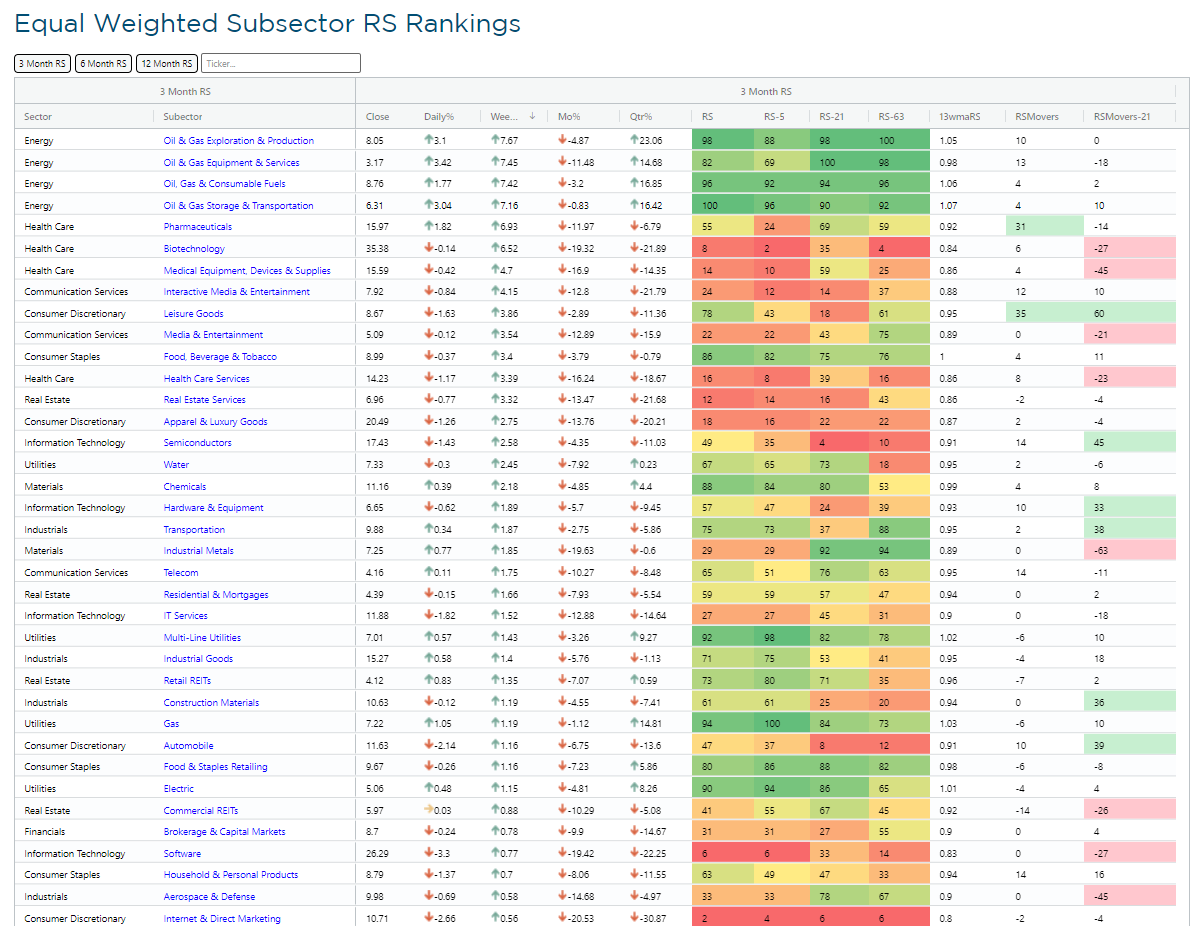 There are not that many RS movers over this time period.

Energy has been the clear leader year to date and actually well into last year, however the least month it has taken a break overall. During that time it has built a nice consdolidation pattern in the form of a flag as seen in the first chart.  It’s RS rankings barely saw a blip while it came back and the RSI has now held the bull range test on both down legs. This tight ABC looking pattern is not back maving above the MA bands and challenging the upper rail. A break over should start another leg higher.

On the breadth front, the sector is way ahead of the entire Power universe remaining best in market through the pullback and never really seeing the longer measures react much at all. Recent divergences in the shorter measures support the pullback being a pause instead of a loss of leadership.

Relative Comparatives haven’t really looked back either and are making new highs again.  Percent Making New Highs/Lows showed the same short term divergences leading into this latest surge.  21day saw new lows about the same as the last pivot low and the long term 63day lows didn’t really react. One thing missing so far is the surge in 10 day highs which would be nice to see come with the break of that upper rail. 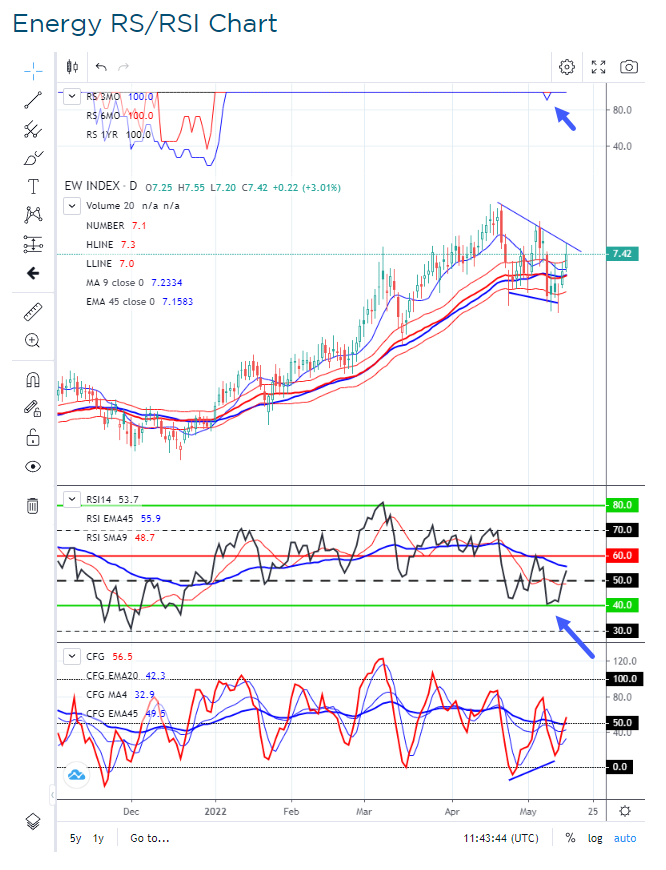 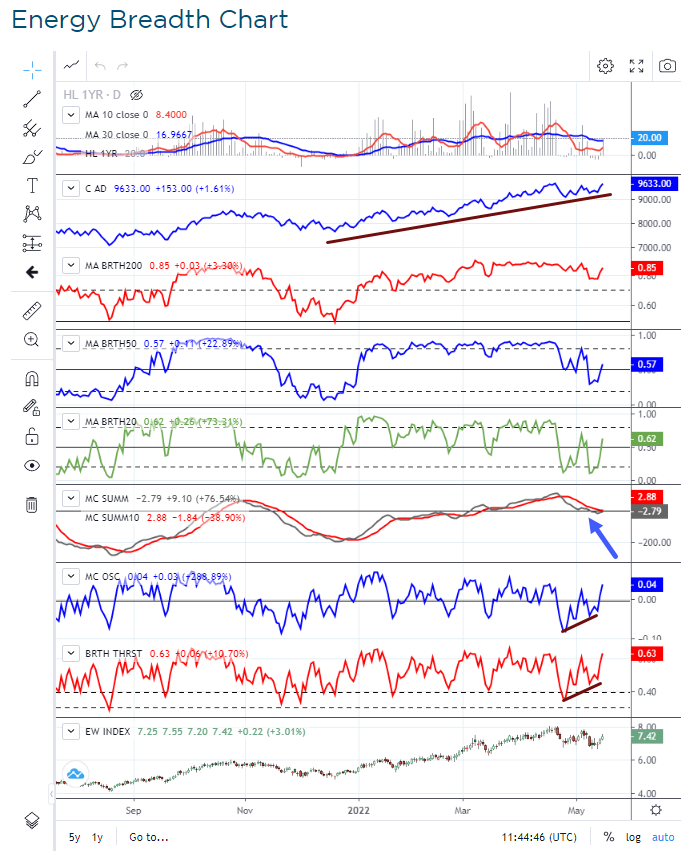 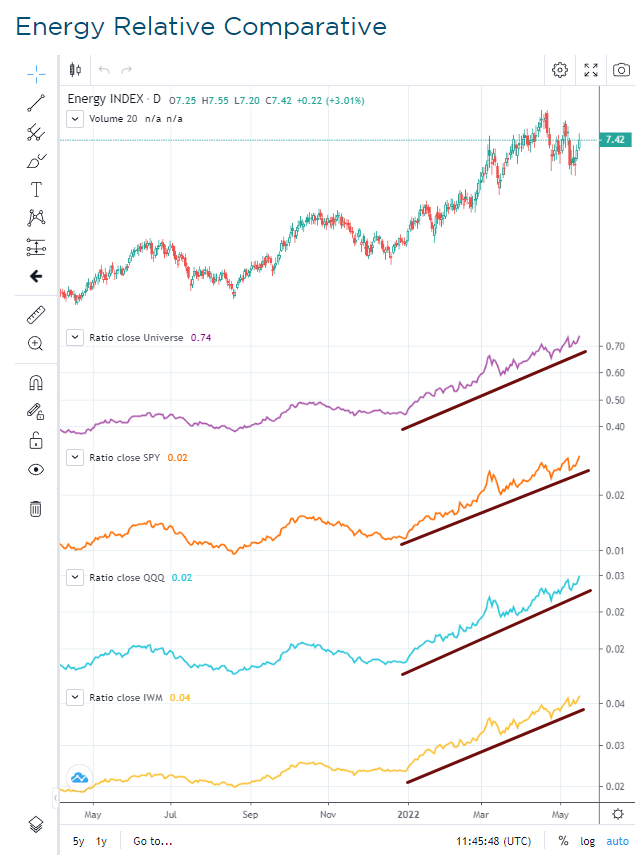 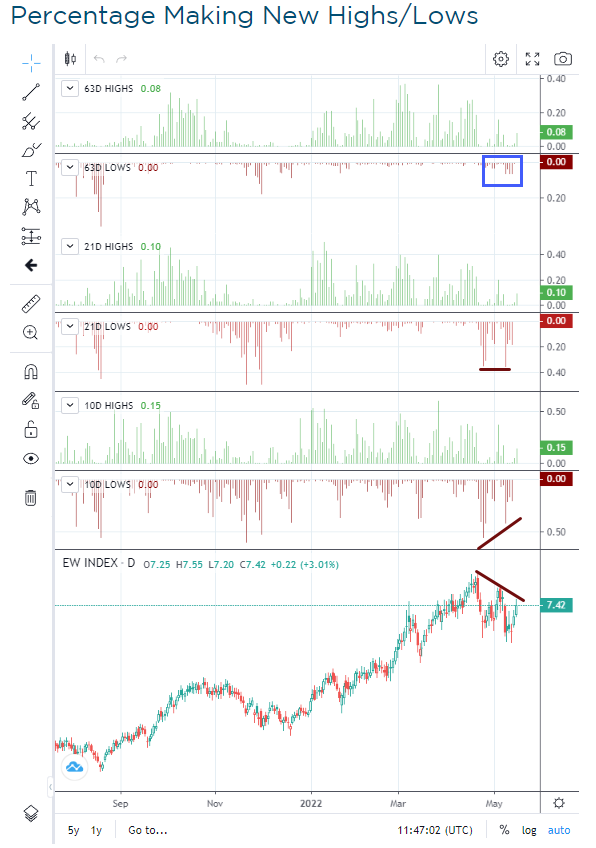 Below are the subsector rankings, which have been adjusting a bit recently. The other two are the top RS ranked stocks in the sector as well as the RS gainers as of yesterday’s close 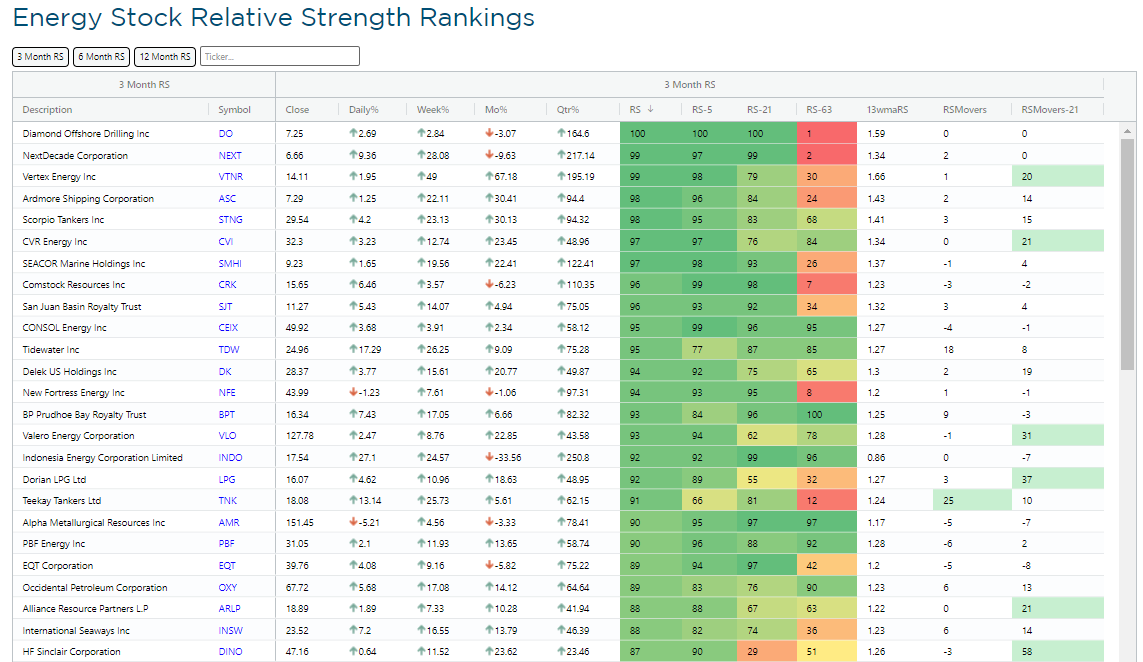 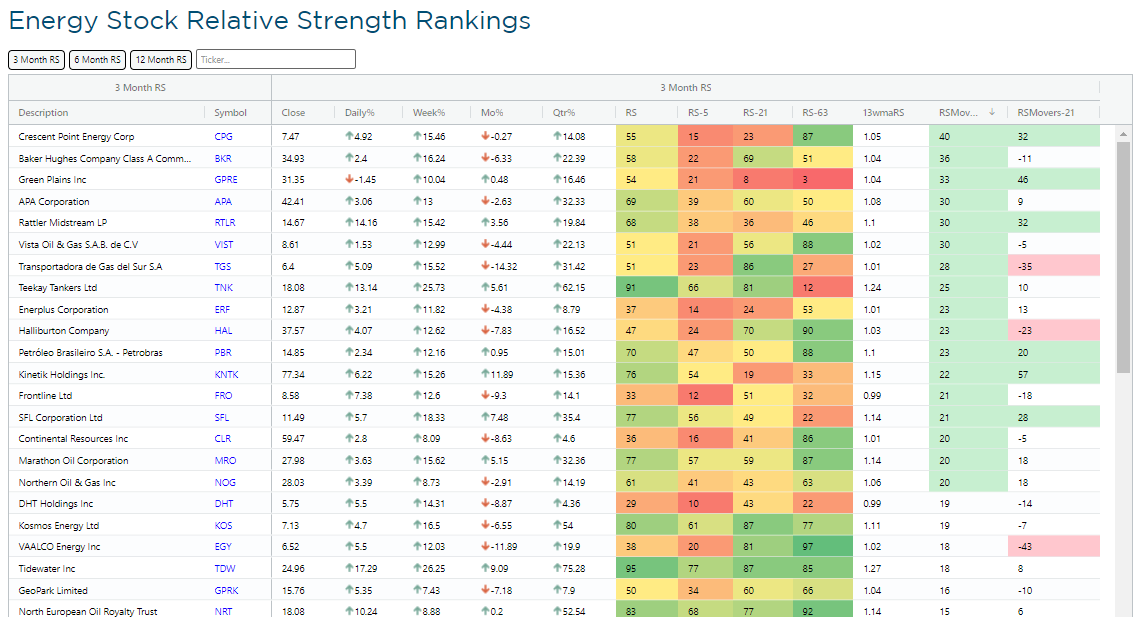 Food Beverage & Tobacco is a strong subsector in the Consumer Staples sector that made a higher low in the recent downdraft and deserves some attention.  The first chart shows the RS rankings on all three timeframes have been trending higher for a little under two months after bottoming at the end of March. RSI did undercut the 40 level testing the bull range but quickly reversed with lows well higher on both RSI and price than the last trough.  Breadth here is also much better than the Power Universe and did not see the big hit many other subsectors did recently on mist levels.  The shorter term measures put in some nice divergences over the last two weeks when things got the toughest.

The Relative Comparatives paint a nice picture of out-performance since the late March reversal, even with the relative pullback and hold of the breakout back tests. Percent Making New Highs/Lows showed nice divergences on the low side and actually printed a handful of highs during the worst of it. 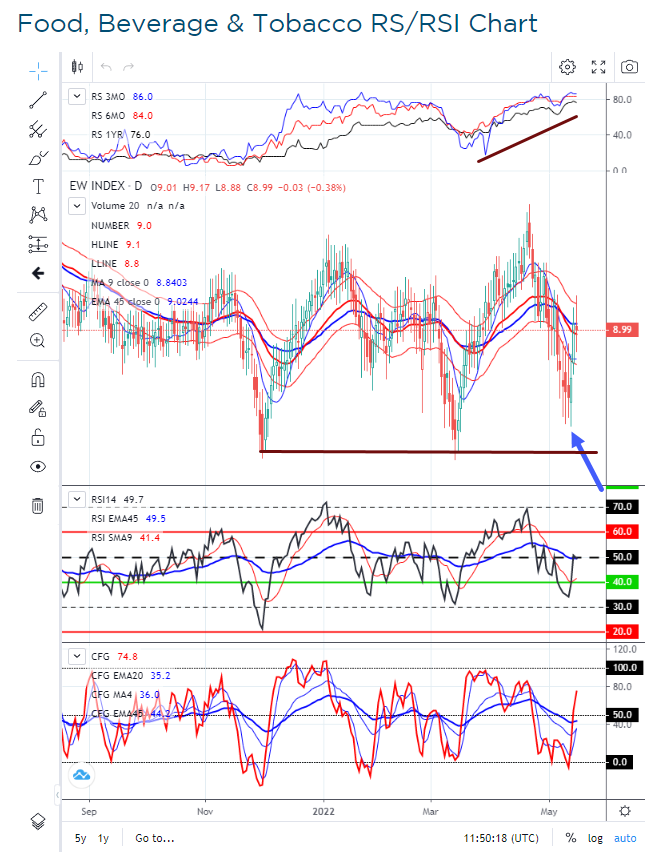 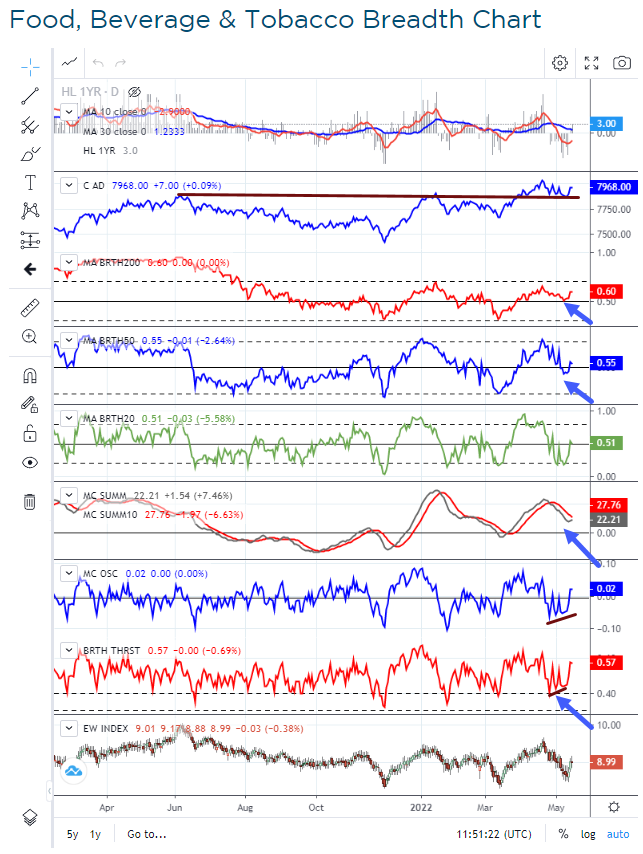 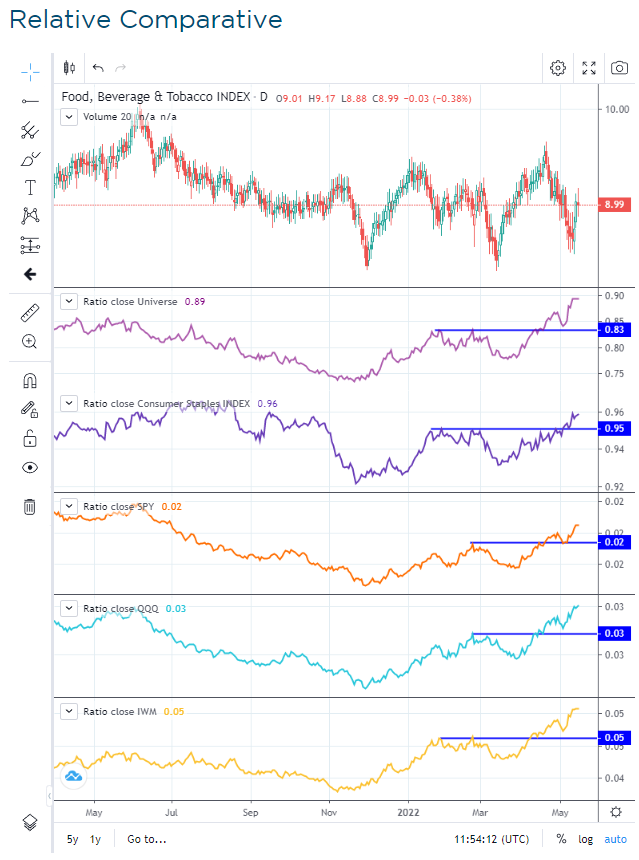 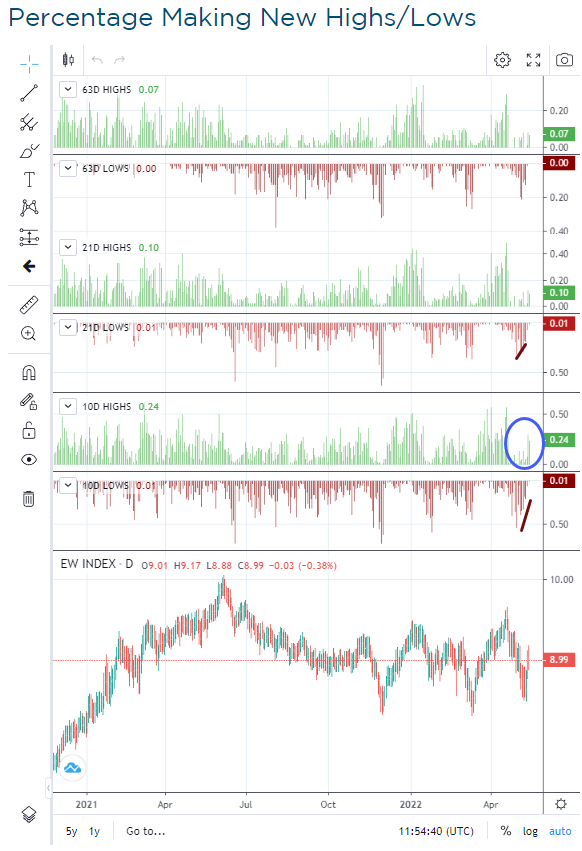 Below are the relative strength leaders and RS Gainers from the interactive table on the subsector’s page.

Chemicals subsector is probably one of my favorites, From the Materials sector it often gets ignored (like not having and ETF!) and shouldn’t. This sector has been out performing for a while now, and often does inside the Materials sector. We hinted to it coming back in favor recently as the shine on metals dulled a bit. That has been a good shift if you made it last month. This is another subsector that not only made a higher low last week, it has been doing so for a while now. The RSI has now tested the 40 level twice while the markets drop hard and barely pierced the 40 level either time showing sellers were not really getting a foothold. The breadth view has seen some weakness, but is holding up better than the Universe as a whole and provide the short-term breadth divergences we look for at the recent lows.  McClellan Summation did fall below zero and will be watched for more weakness, but a cross back over zero and the moving average could be a nice signal to pay attention to.

The Relative Comparatives have been in uptrends, but are all accelerating here showing broad out performance wherever you compare right here while the markets as a whole are searching for their footing.  The Percent Making New Highs/Lows also showed nice shorter and intermediate divergences on the last trendline test we just bounced off. The longer measure did see a downside spike on the last pivot low, but was not a big extreme looking left on the chart. 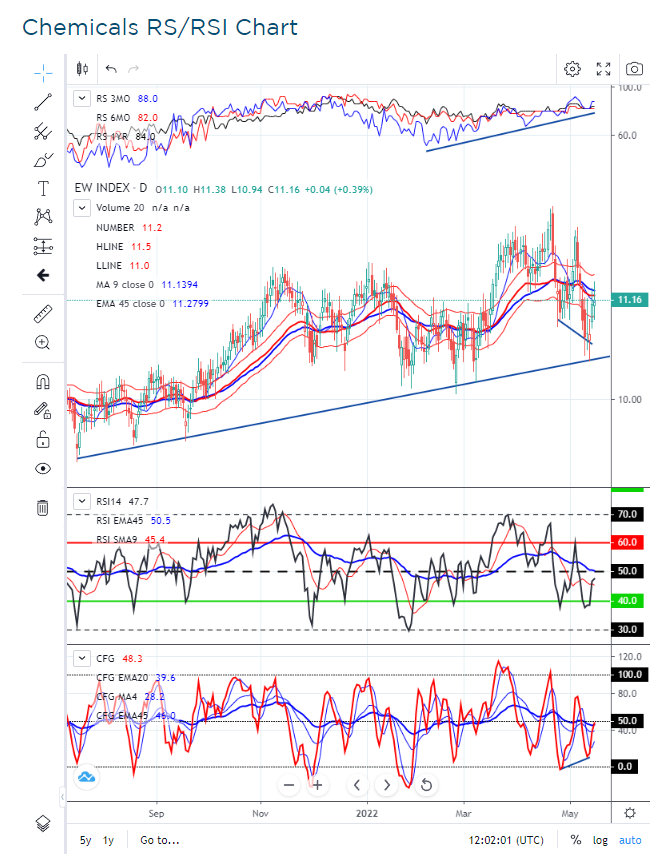 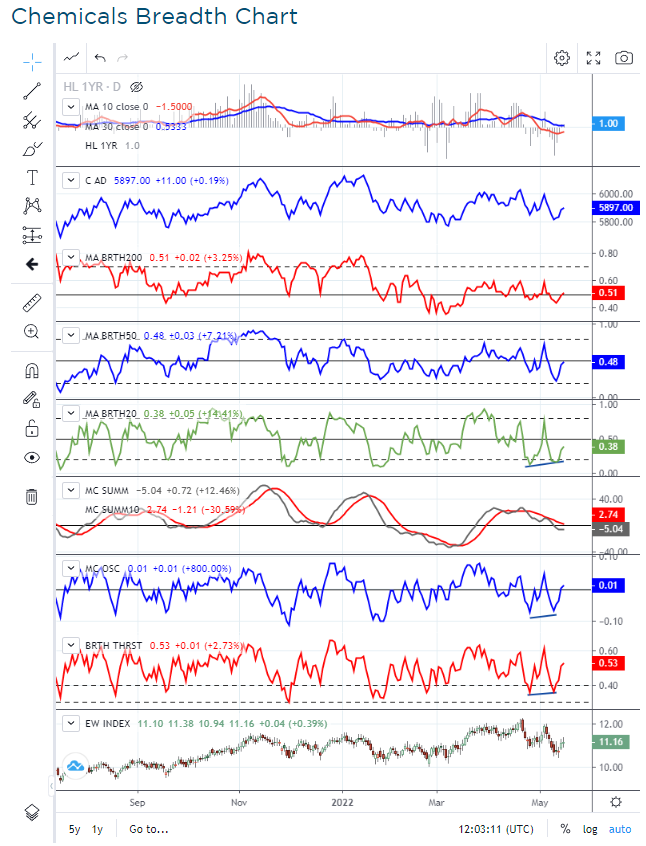 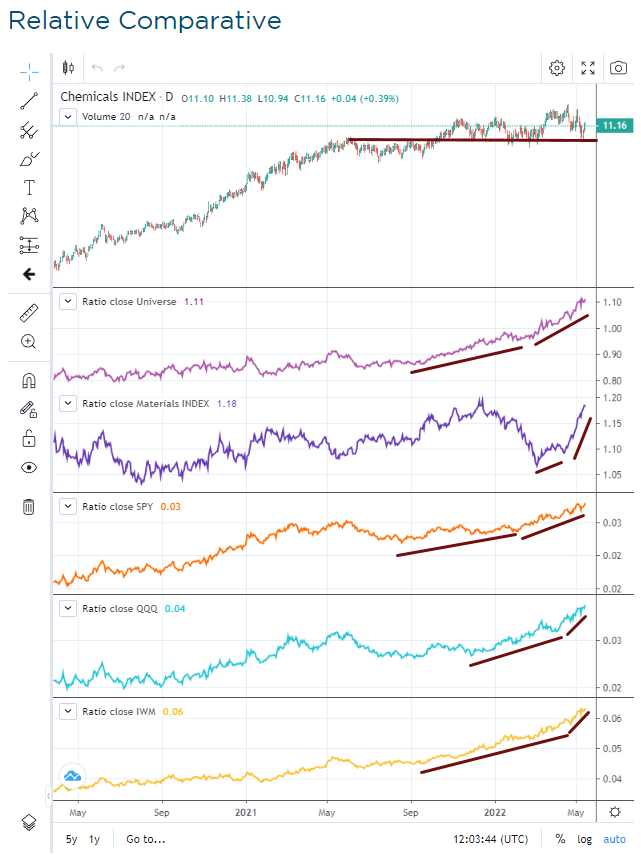 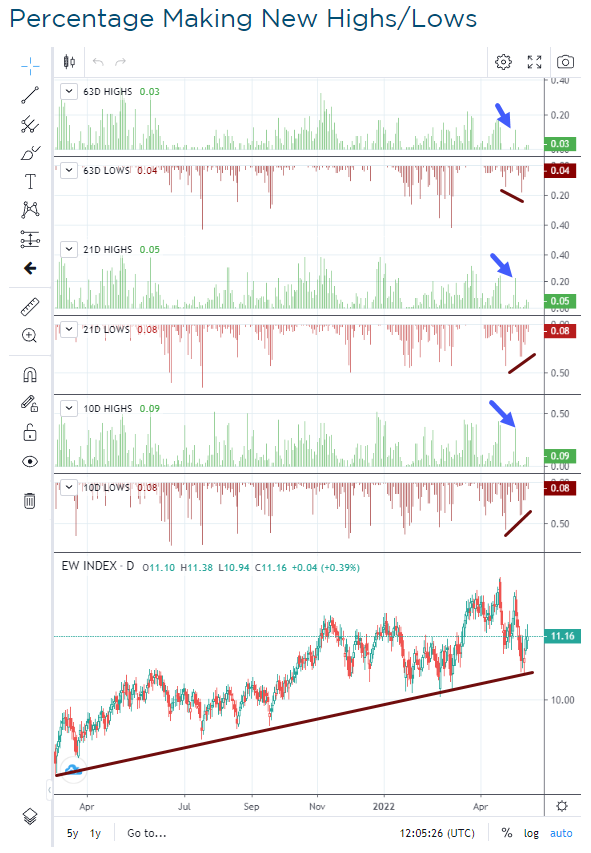 Same as above, here are the Top relative strength names as well as the RS Gainers as of yesterday’s close

There is still a lot to prove here and the burden of proof is on the buyers.  Even if these are not the ultimate lows (which we won’t know until much later) there are still tradable areas and even some spots that are worth dipping a toe longer term if you have the discipline to cut them if we start making new lows. Either way, now is the time to be building lists and watching for where the money and participation are flowing.  This should give a few ideas of where to dig deeper within the sites pages.