After last weeks no where to hide week, we saw a few sectors try to rebound. Energy being the only one that did so with any conviction. Financials also showed some absolute strength and moved a bit off the lows in relative strength. Utilities was the other gainer. As denoted by the yellow arrow, I consider between -.1% and +.1% a flat return for the most part; therefore Industrials were flat in my book. The rest still look sick and aren’t giving much reason to participate. Hence the buyer’s strike we mentioned in the Macro Review this morning. If forced sellers are hitting the markets, that is when it can get ugly, but also will eventually find the price buyers are willing to participate. That is the question everyone is working on now. We won’t really know until after the fact.

Outside of Energy there is some red in all the subsectors now.  Utilities, as we will discuss below has seen a marked improvement over the last week whole other spaces have been bouncing around down here. Over the last month we have already had two mildly washed out sheets with most of the sheet pink or red, but more pink than red, showing pockets trying to hold up.  If we get a third washout look here soon, I will be looking for a longer retracement to come with it. Whether that washout comes as another divergent one like the last one or goes much deeper red since there is room, they both should create a tradable bounce sooner than later, the problem is always from how far down will it start.

The MA breadth remains mixed with the only strength in Energy and a very few other spaces when looking at these measures. The longer term MA Breadth measures in Utilities subsectors have held up as we mentioned, but you can see the short-term measures are still on the rocks. It still leans pretty defensive no matter how you slice it. 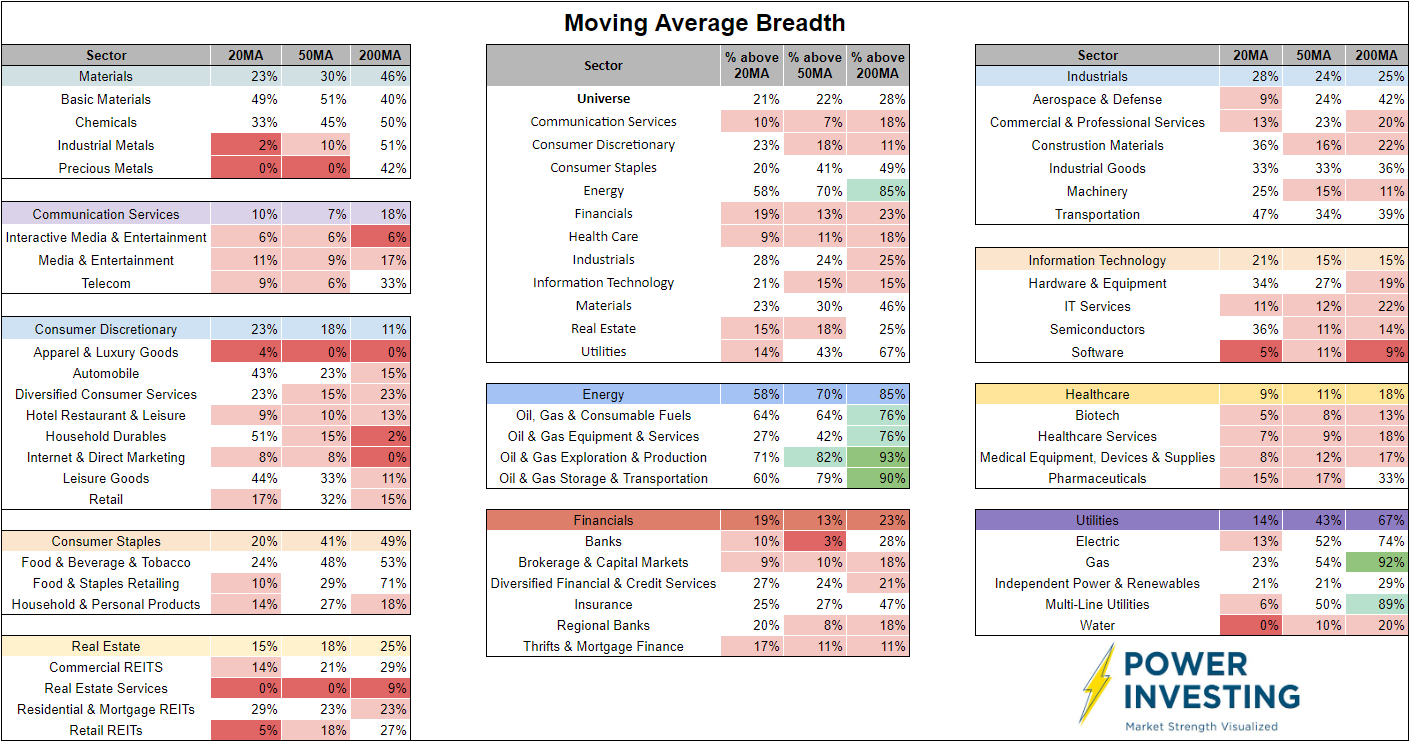 Below are the sector RS gainers and losers for the week. Overall there were only 6 that outperformed the $SPY for the week and only 5 with absolute gains. Since most are in discovery and watchlist building mode, here are the subsectors that made the biggest 3mo RS moves over the last week. The subsectors that lost the most relative strength were pretty ugly from a weekly return perspective with the $SPY down just -.16% on the week. This stage of the move is taking out many of the defensives as they get pulled down with the rest eventually toward the latter part of a downdraft.  Again, we are seeing some of those signs, just no sign of it changing yet. When it comes, it is likely to happen fast, so we stay alert.

There is still not much to love in the markets right now. Housing related spaces have been popping up recently. First it was Household durables from Consumer Discretionary that is is littered with housing and related stocks. Next, we covered Basic Materials in the Materials sector and this week we see Construction Materials shows up in the RS gainers camp from the Industrials sector. All of these tie to the housing and construction industry, and they have all been showing relative strength in this most recent bout of weakness. This week there is not much that interest us, so we are going to focus on the Utilities sector since it did peak our curiosity. I have been warning about the sector for a month or so as it rolled over from it’s breakout run. I noted it closer the last couple of weeks when it’s short-term breadth turned the worst in the market during the downdraft which is not the normal MO. Last week it showed both relative and absolute relative strength that got us interested in looking deeper.

Utilities is a smaller sector with a little more than 120 or so securities across all 5 subsectors, so it is not a one of the bigger ones we follow. Mainly because of the barriers to entry that exist. However, it is one of the defensive spaces that is often sought out in tough times for both yield and perceived safety.  As mentioned above it had been one of the recent winners after its breakout until taking a 180 degrees turn. We have discussed how bad the short-term breadth got over the last week as it looked like it was washing out and was some of the worst among all subsectors at a time you would expect it to be stronger. Lets go through the charts and look at them individually.

The top left chart has our RS scores plotted for all three timeframes we cover (3mo, 6mo, and 12mo) and they have held in the RS leaders space since the breakout and only dipped last week during that washout type action, which sent the overbought RSI down to break the RSI bull range and move quickly from 80 to 30. That is not normal movement for a sector like Utilities, but when the markets as a whole are selling it can exacerbate anything.

The next chart shows the sector breadth which really took a dive on the short-term measures we follow in recent weeks only to improve last week while the markets were getting more shaky.  The longer term breadth measures like the %>200sma (3rd window from the top of the chart) is at 67% and well ahead of the percentage for the Power Universe which is at 30%. The longer term view is still pretty strong with a short-term washout which coincides with a back test of the original breakout.

The bottom left chart shows all the relative comparisons we like to look at and you can see the relative out performance moved back to the highs across all comps last week after turning sideways the last month during the pullback. It never really turned down strong like price, so any strength here could forge clear breakouts in these lines.

The final chart on the bottom left shows the new highs and lows over specified days (not a full year) to show short to intermediate term changes participation as they happen.  What I circled was the washout look we saw from the shorter measures while the longer measure just moved back to normal pullback zones at their peaks. With the new lows dissipating quickly last week, now we just need to see the new highs start to perk up first with the 10 day highs and moving up through the progression over time.  This does have the look of a sector ready to improve if the general markets give it even an inch of wiggle room, but it will be hard to accomplish in a liquidation tape even with the defensive nature.

Going back to the price action, the back test looks to be flagging and could break to the downside if the breakout support is lost here. This flagging and lack of more absolute strength (although it was one of only 3 sectors positive last week) is partially due to market conditions, but if the investor appetite is there, it should break over the flag and through the MA bands (Number, HiLine, LowLine are the read average lines on the price chart in the top left). We will have to wait and see as this is not time to buy just based on historical norms. Price needs to confirm a change in character before getting involved. 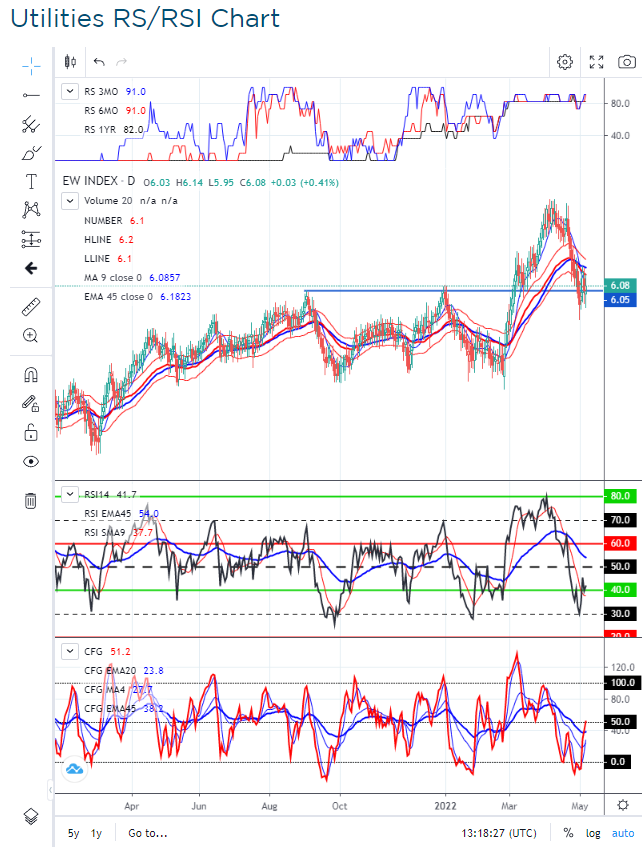 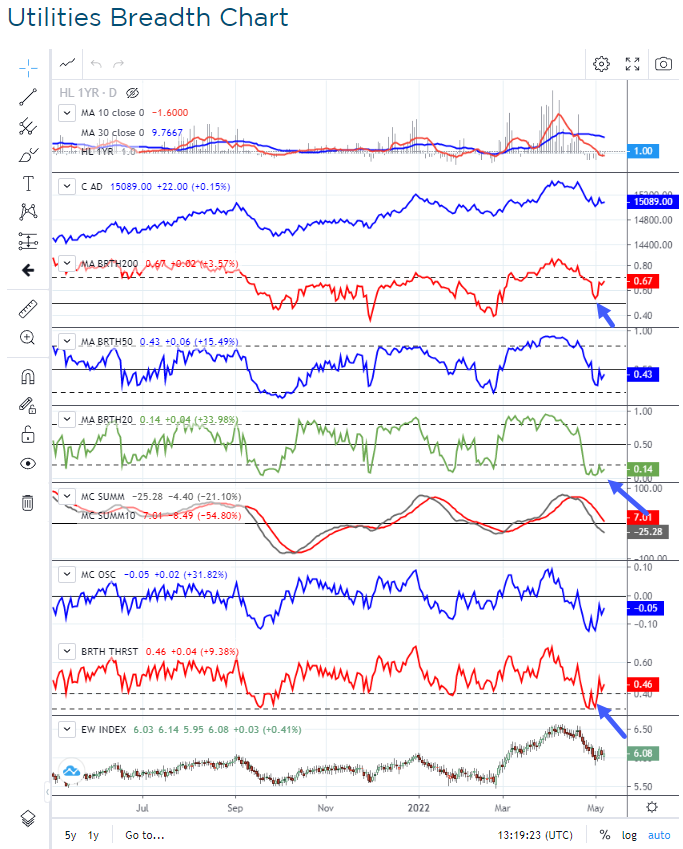 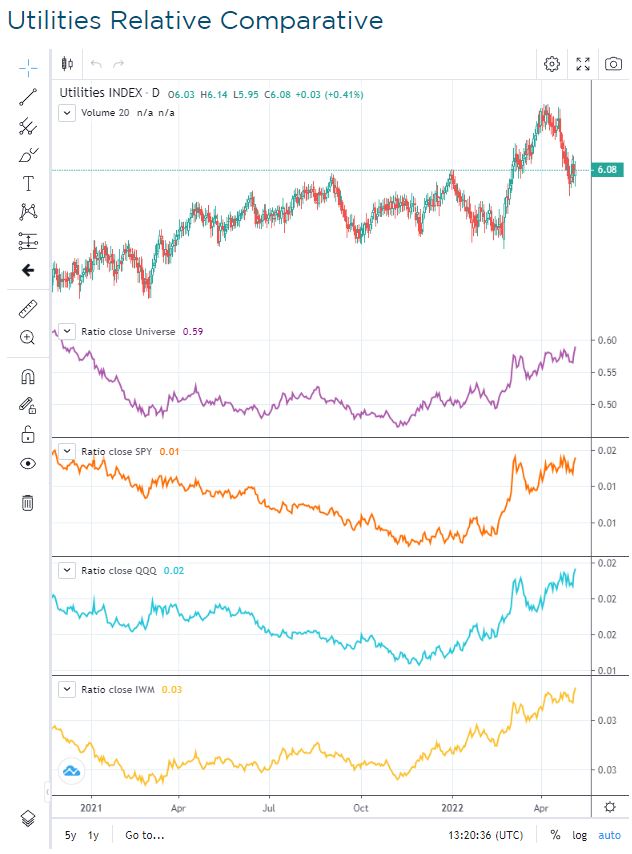 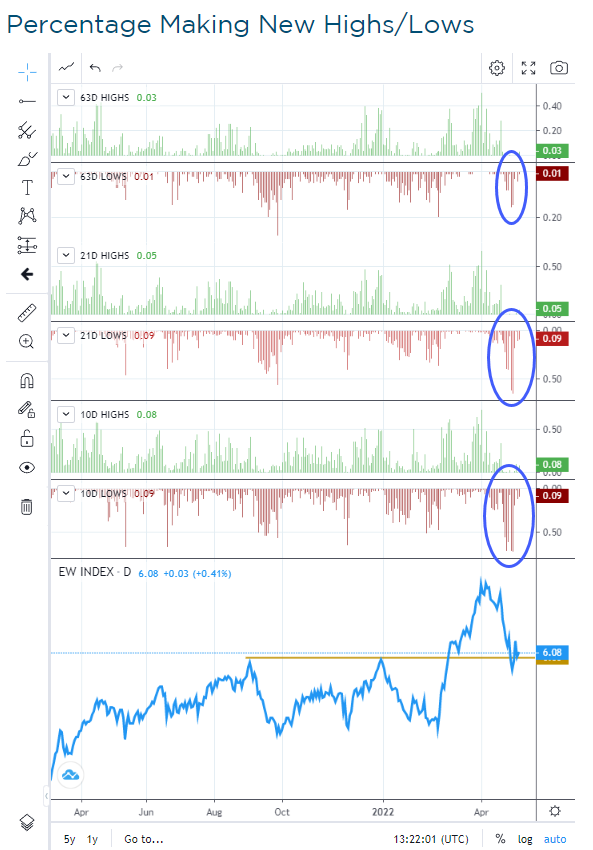 I will do my best to point out any changes in character during the week on the @power1nvesting social media streams, but as of now, this is the only sector that jumped out and could be a tight opportunity with the parameters we discussed above. Any new money put to work here is at higher risk than normal, so build your position sizing and plan of exit accordingly.