Below are various names that caught our eye during our research process that might be worth a closer look. It is certainly not an exhaustive list, but should give plenty of names to review and develop a plan around based on your trading style and strategies.

Minor breakouts in a larger range or consolidation in an uptrend

Breakout setup from a consolidation after a downtrend

All downside setups for near term potential weakness.

Below are various names that caught our eyes during our research process that might be worth a closer look. It is certainly not an exhaustive list, but should give plenty of names to review and develop a plan around based on your trading style and strategies.

Doximity gapped up 24% on February 9th on earnings and then the next tested the VWAP from its high. during the downtrend, the MA bands were tested multiple times and proved to be short entries. Now, it has gapped above, and held them on the re-tested. Clearly this is a change in the rate of trend. In the few weeks after the gap it has formed small base and is now being pinched between two VWAPs. There was an overshoot of the VWAP from the low that tested the lower MA band. A decisive move from this range will be soon and will be telling on the longer term trend of this stock. If to the upside, it will confirm the earnings gap as changing the trend. 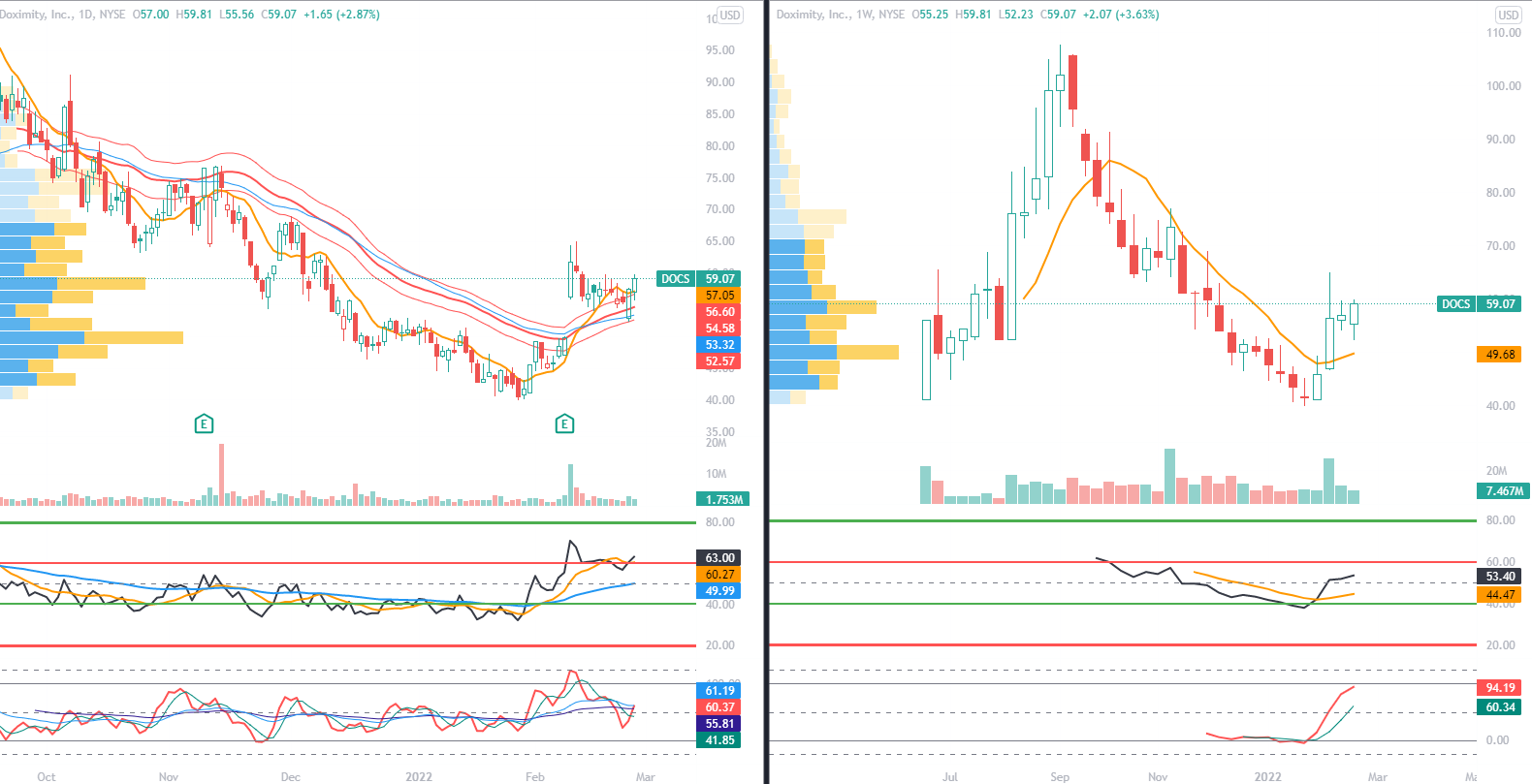 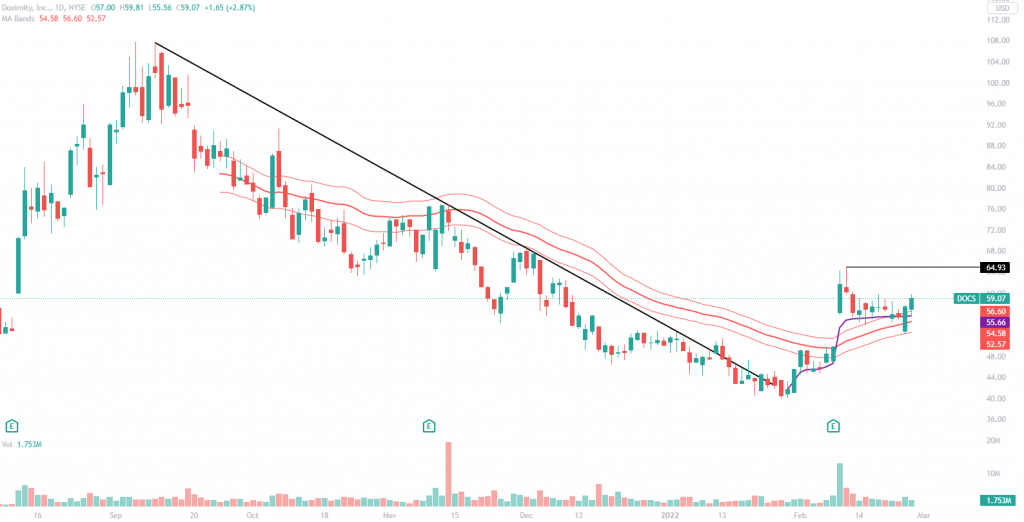 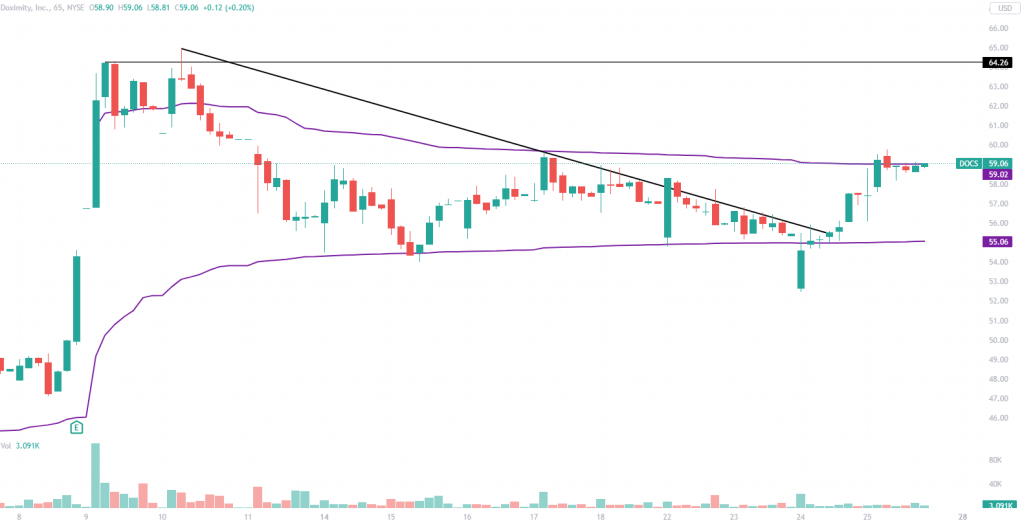 Freeport-McMoRan is at the high end of a 40 week consolidation and broke out Friday on a closing basis. The weekly RSI never lost the bull range and the daily RSI has entered into a new bull range. The VWAP from the low of the consolidation was where buyers stepped in throughout the base, with one overshoot. The VWAP form the second swing low also acted as support on Thursday indicating that buyers are in control at the high of this range. Looking at the lower left chart, we see that this stock has had a fantastic run up over 800% from the March 2020 lows and could be poised to run up again. 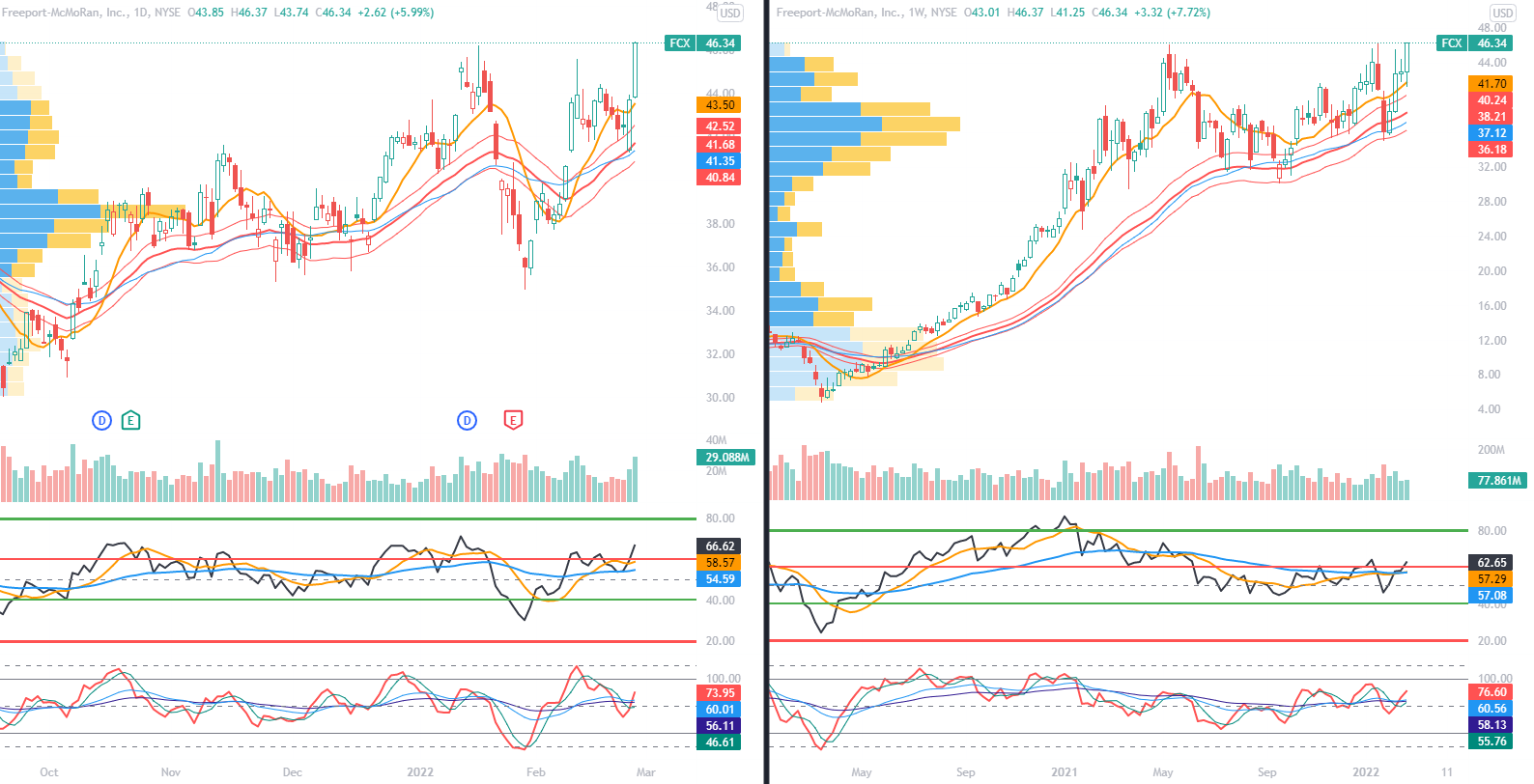 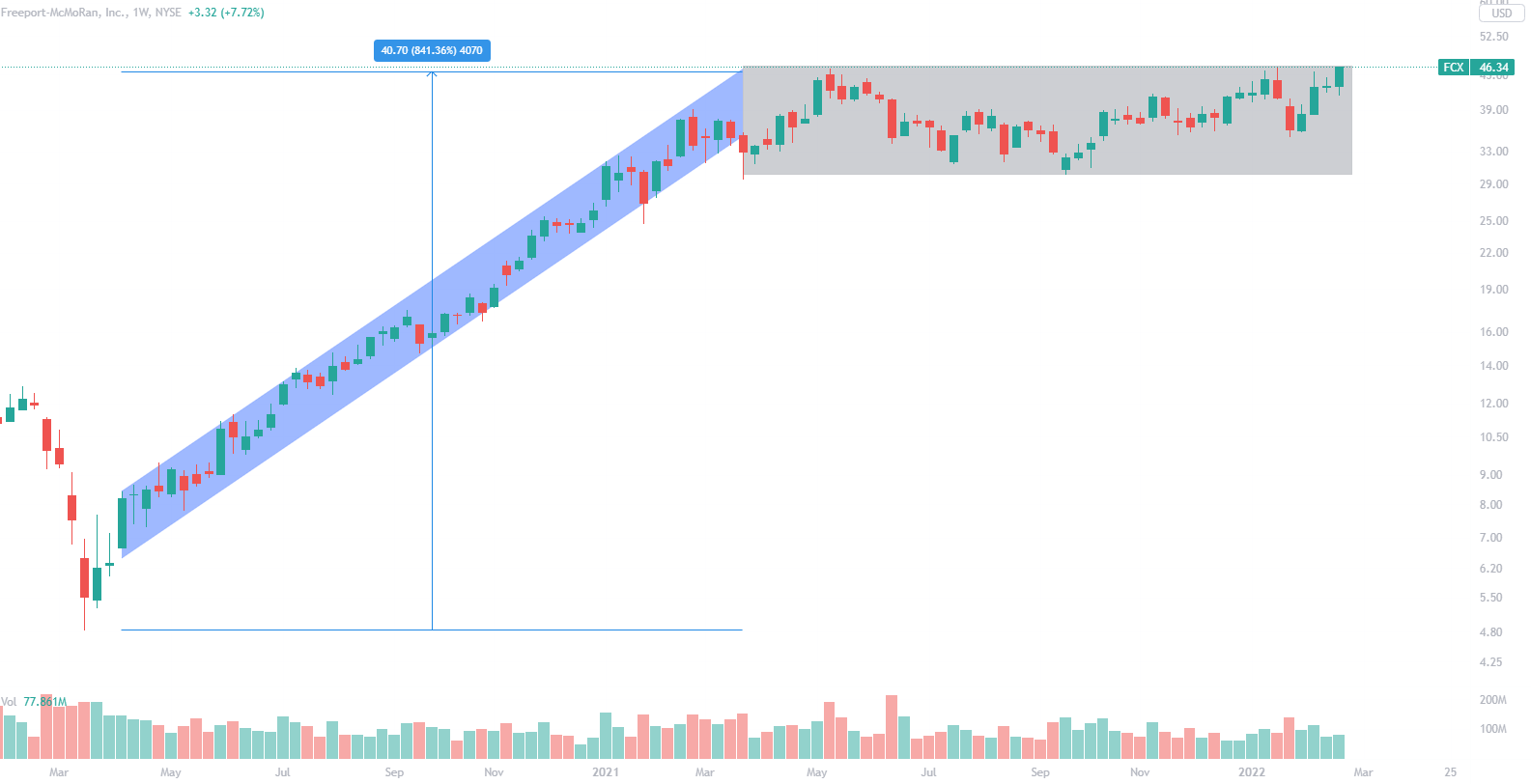 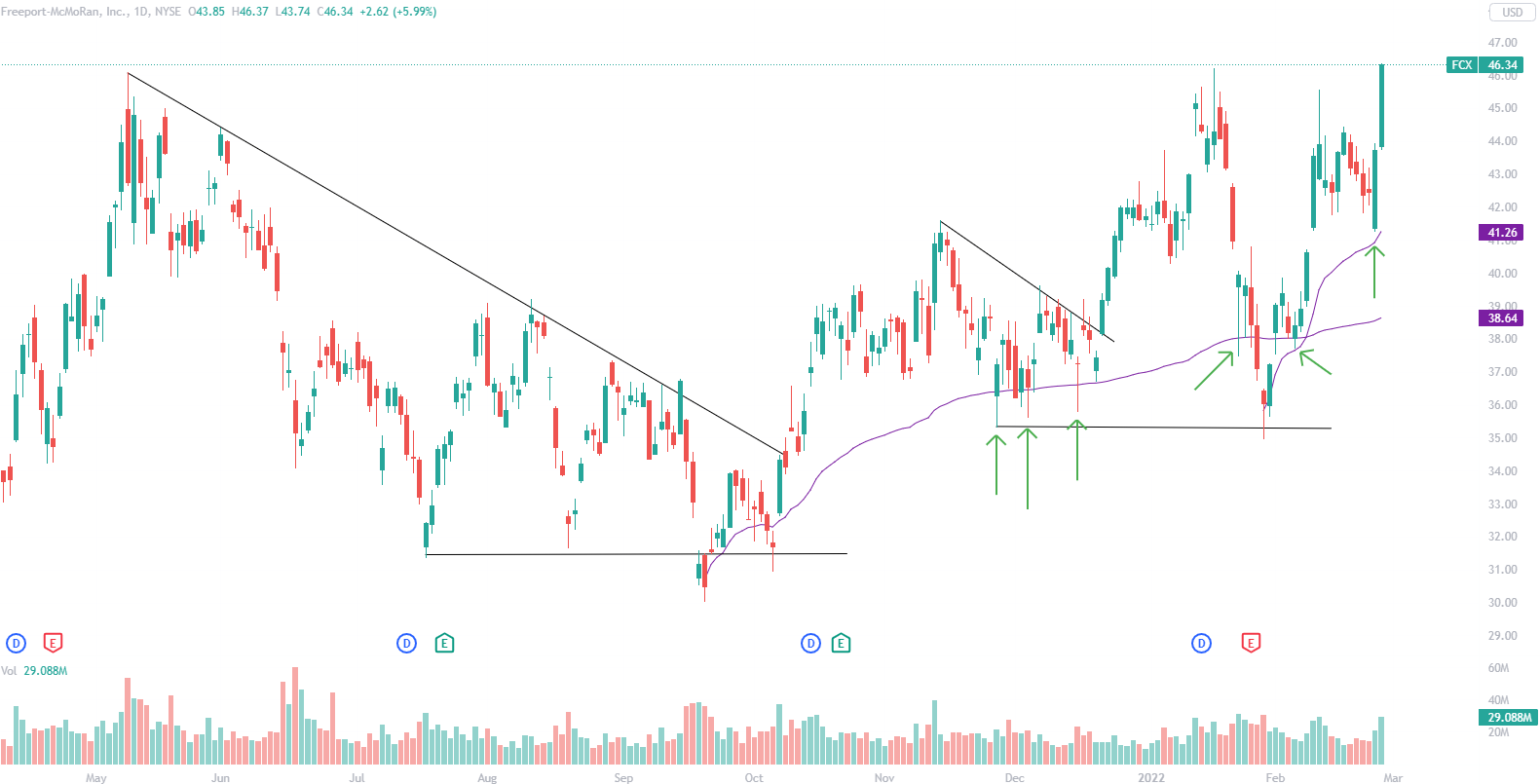 Live Nation Entertainment closed at an all time high Friday while the markets are still in a decently sized drawdown. The VWAP from the low of the last correction was where buyers stepped in early last week propelling the stock to new highs. The RSI on the weekly was at 80 the previous time price was at this level. Now it’s at 65 and has plenty of room to run before becoming too “overbought”. This continues the re-opening theme that we have seen and pointed out a few weeks ago as Hotel, restaurant and leisure stocks were showing major breadth improvements. 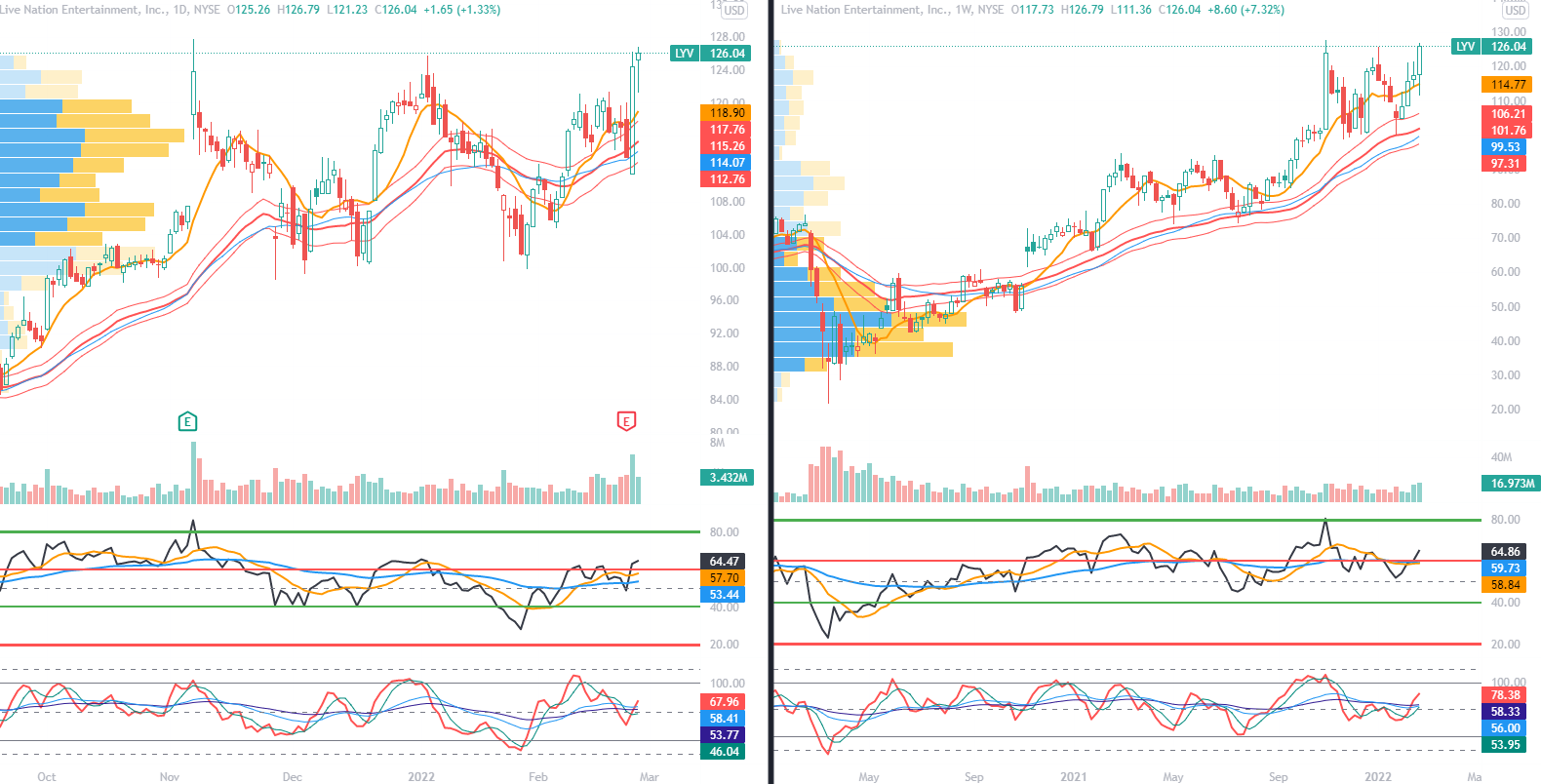 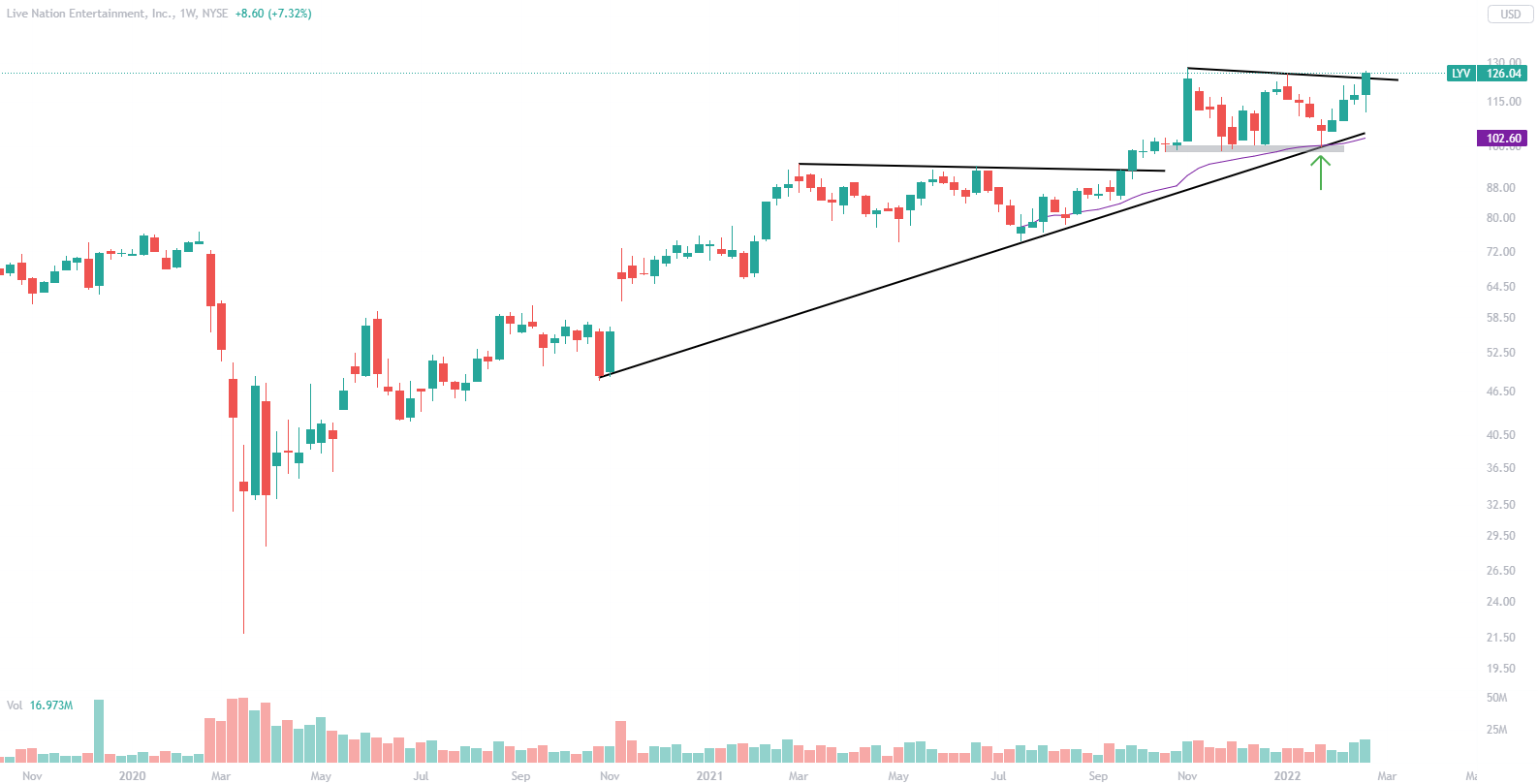 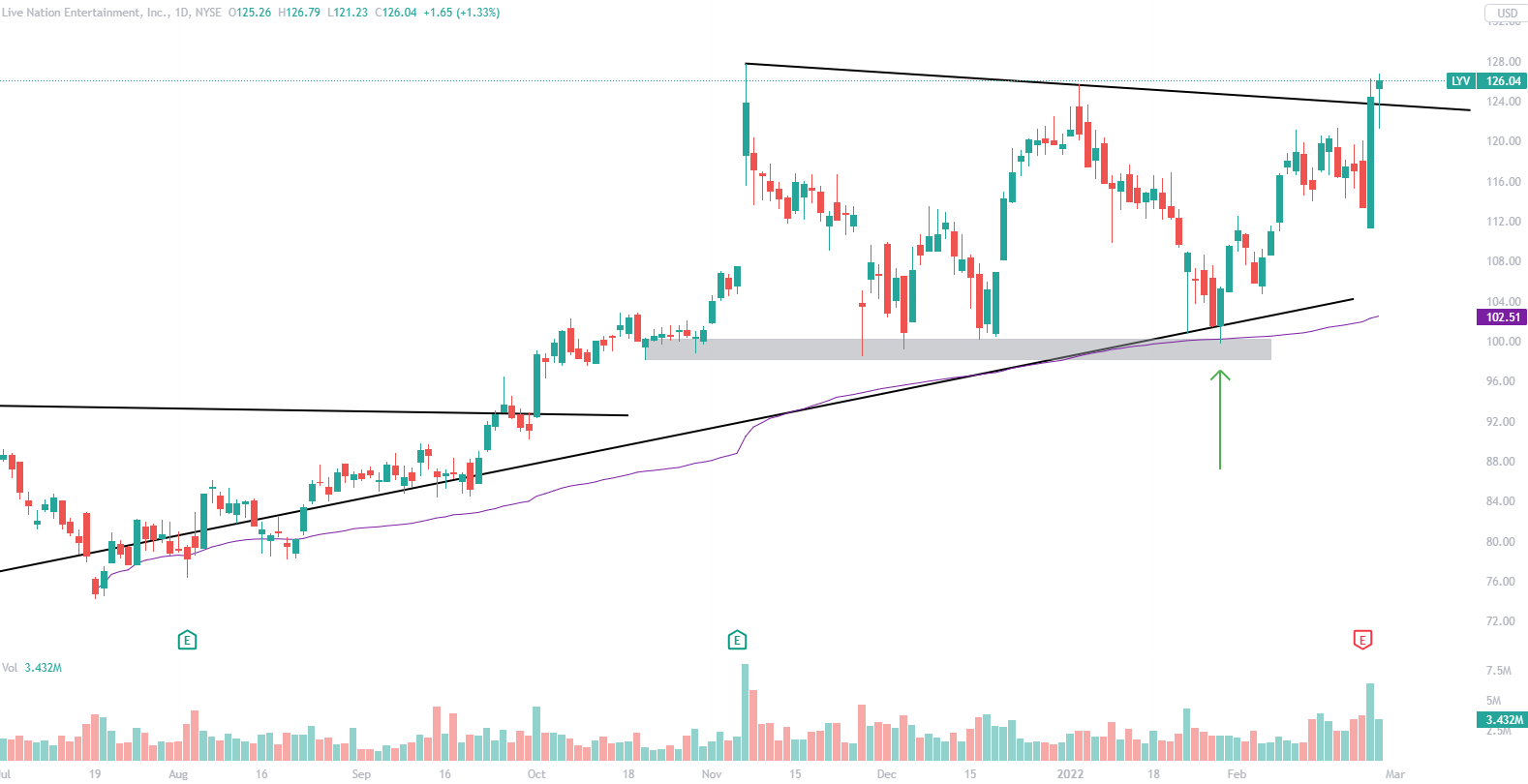 Taiwan Semiconductor is nearing a big weekly test of the RSI bull range. It hasn’t lost it on that timeframe throughout this year long double top pattern. This could be a support play at the low end of this range, or a short setup if the break below $108 were to hold unlike the previous five attempts. On the bullish side, why would the support break now after six tries? RSI hasn’t broken the bull range on the weekly and the VWAP from the covid lows held strong. On the bearish side, the support got breached intraday and closed back within on a strong rally for markets overall. The lower bollinger band. Price was ~8% below the lower bollinger band so a rally was due. 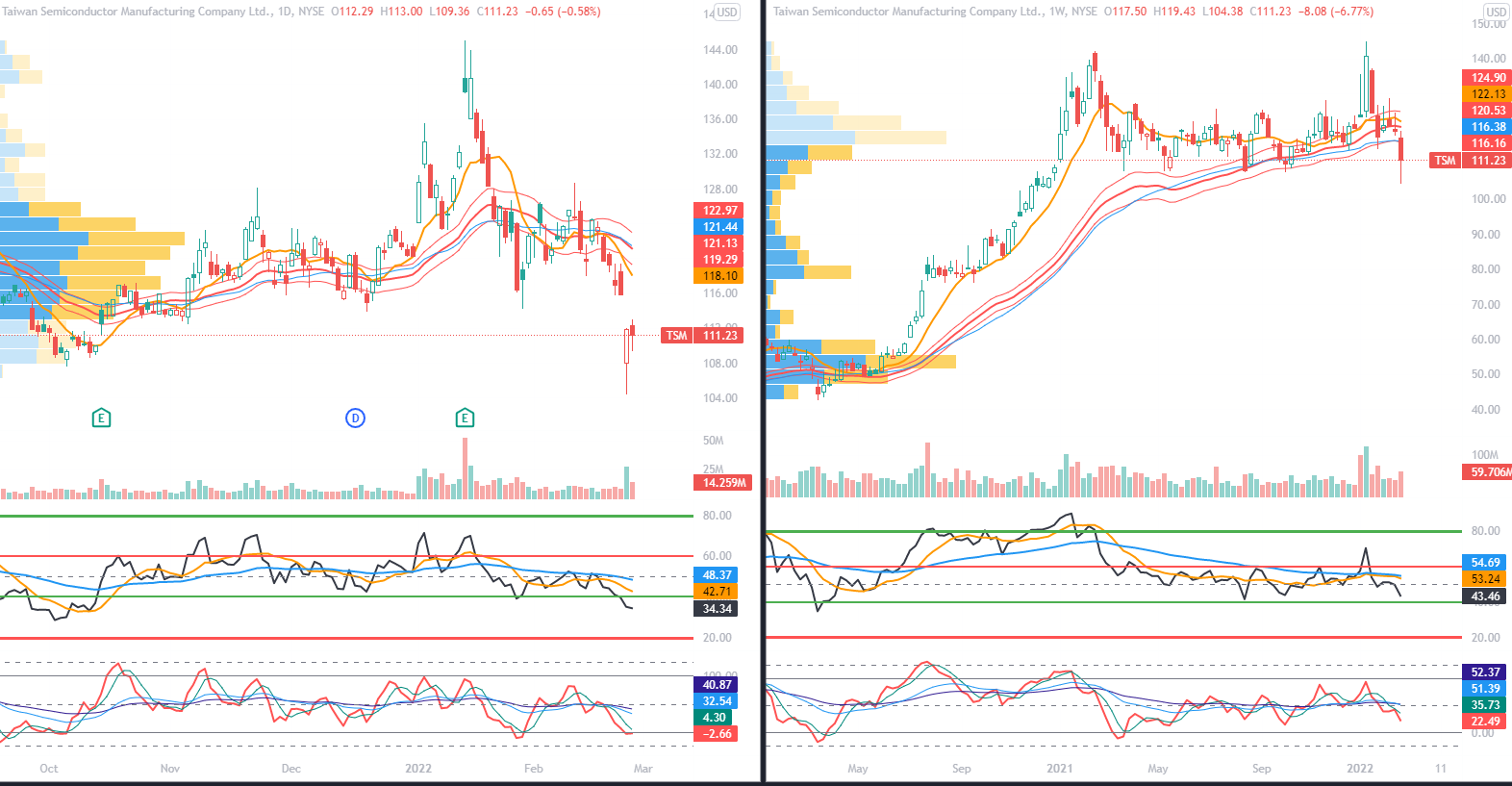 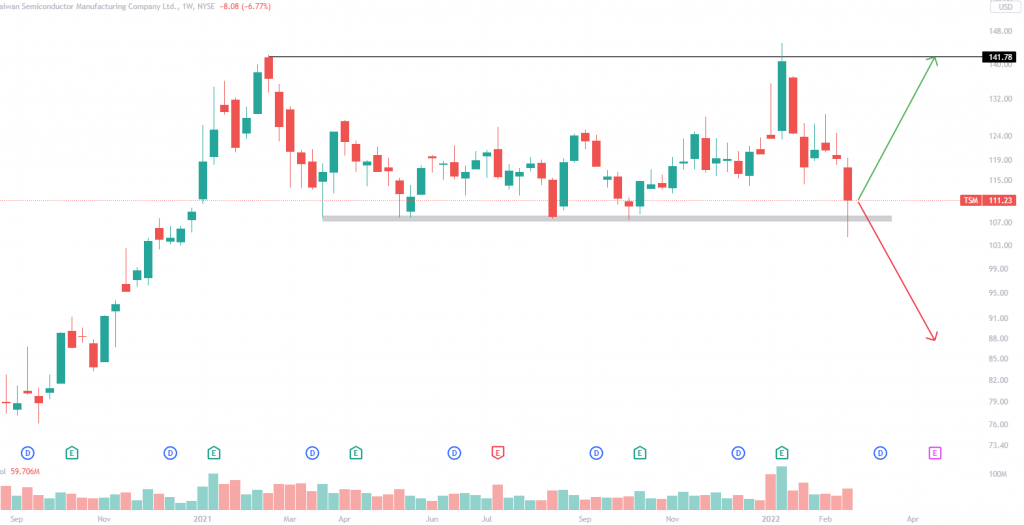 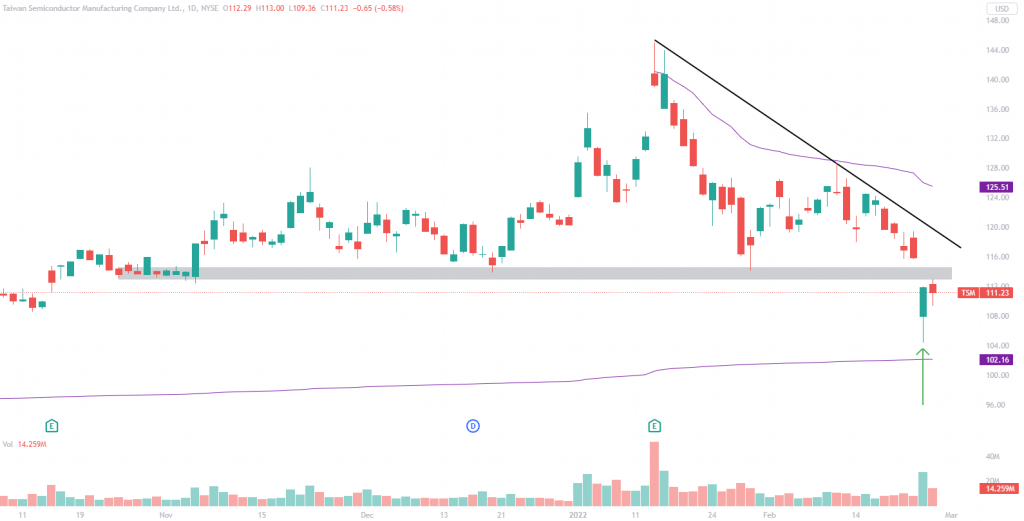 Ticker: $BSX is a Health Care staple company that has relatively underperformed for a few years versus the $SPY but looks like it want to revers that relative trend as the stocks sets up for a major Cup and Handle breakout. The RSI on both the daily and the weekly are heading back over 60 in bull ranges on this weeks big price move, but are nowhere near overbought as it challenges the old highs. Bottom right shows the 65 minute chart with the AVWAP off the quarterly lows playing support recently. The 5day moving average in yellow is also turning back up and getting pulled by the price move. Some may look at the handle as an Inverse Head and Shoulders pattern, but I don’t see the volume pattern there supporting that, but it’s still a handle, albeit a little sloppy.For now working against 41 looks decent, if the breakout comes that will move up under the 43 volume node. 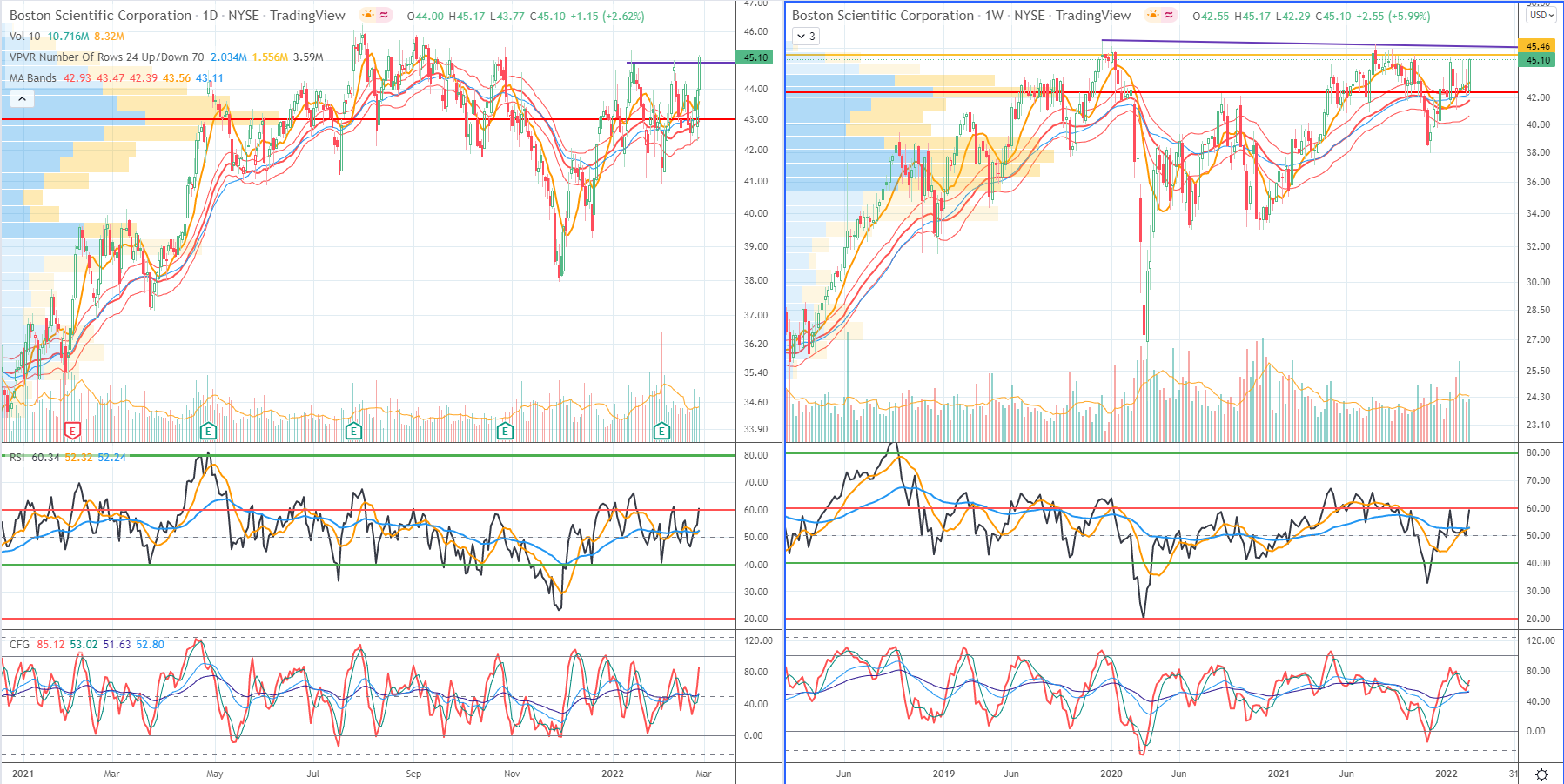 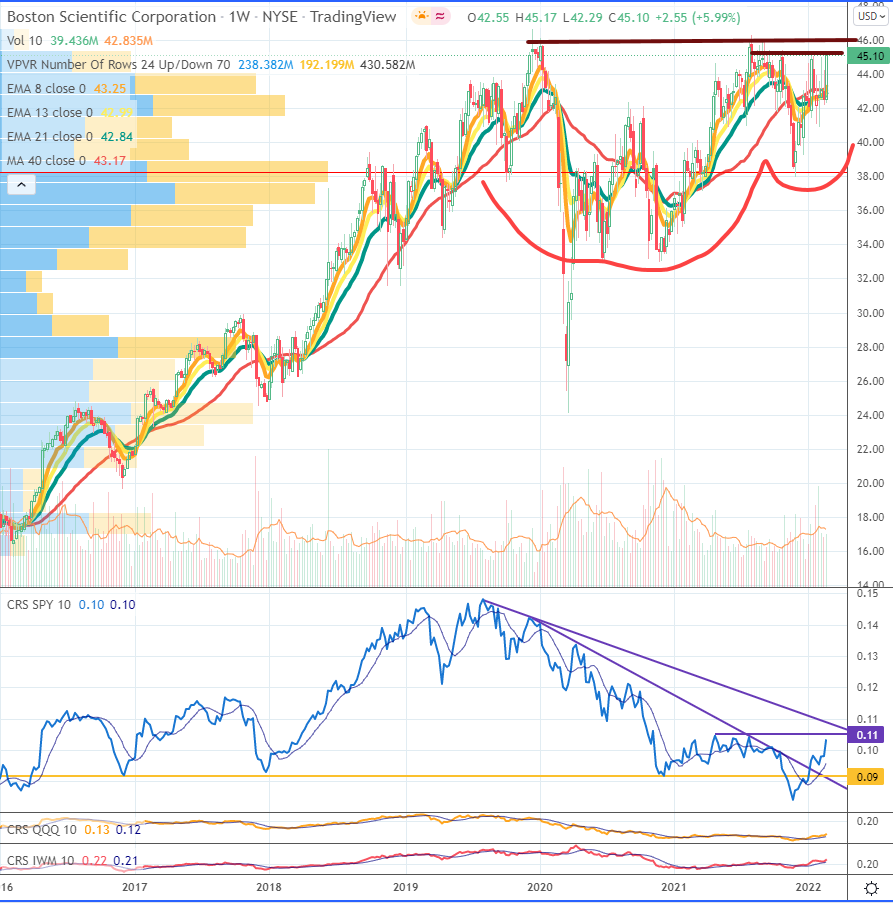 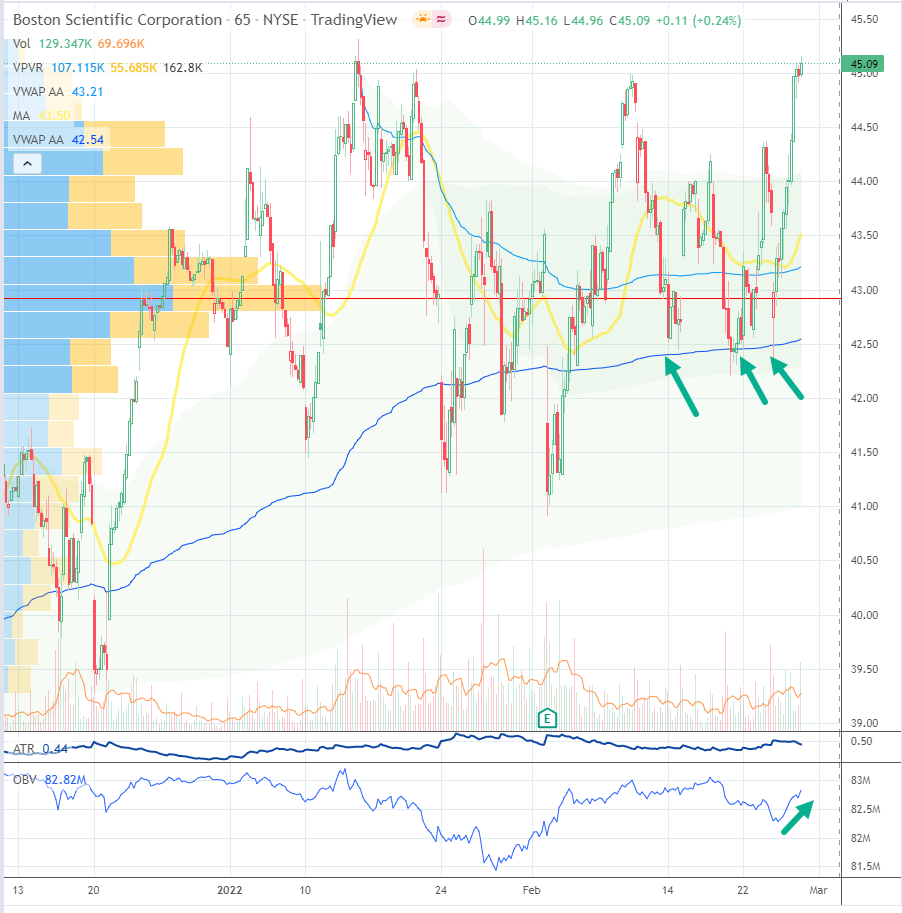 Exelixis charts are showing a change of character on multiple levels as it leaves a small base and challenges a larger down trend line.  On the daily, the RSI is moving back over 60 solidifying its RSI bull range after it held the range test last month.  Bottom left comparative chart showing it has already broken out relative to the SPY and the end of the week moved away from the 200 day moving average in red while all the EMAs are already following higher. With earnings out of the way with a decent reaction in a tough environment, I think this can continue to move back higher within this larger range.  Value on the weekly (red horizontal) and the previous peak will be the next hurdle. From there the 26 level looms large, but that is a solid move from here if it gets there. For now I would work against a close under 18.90 and trail that if it moves. 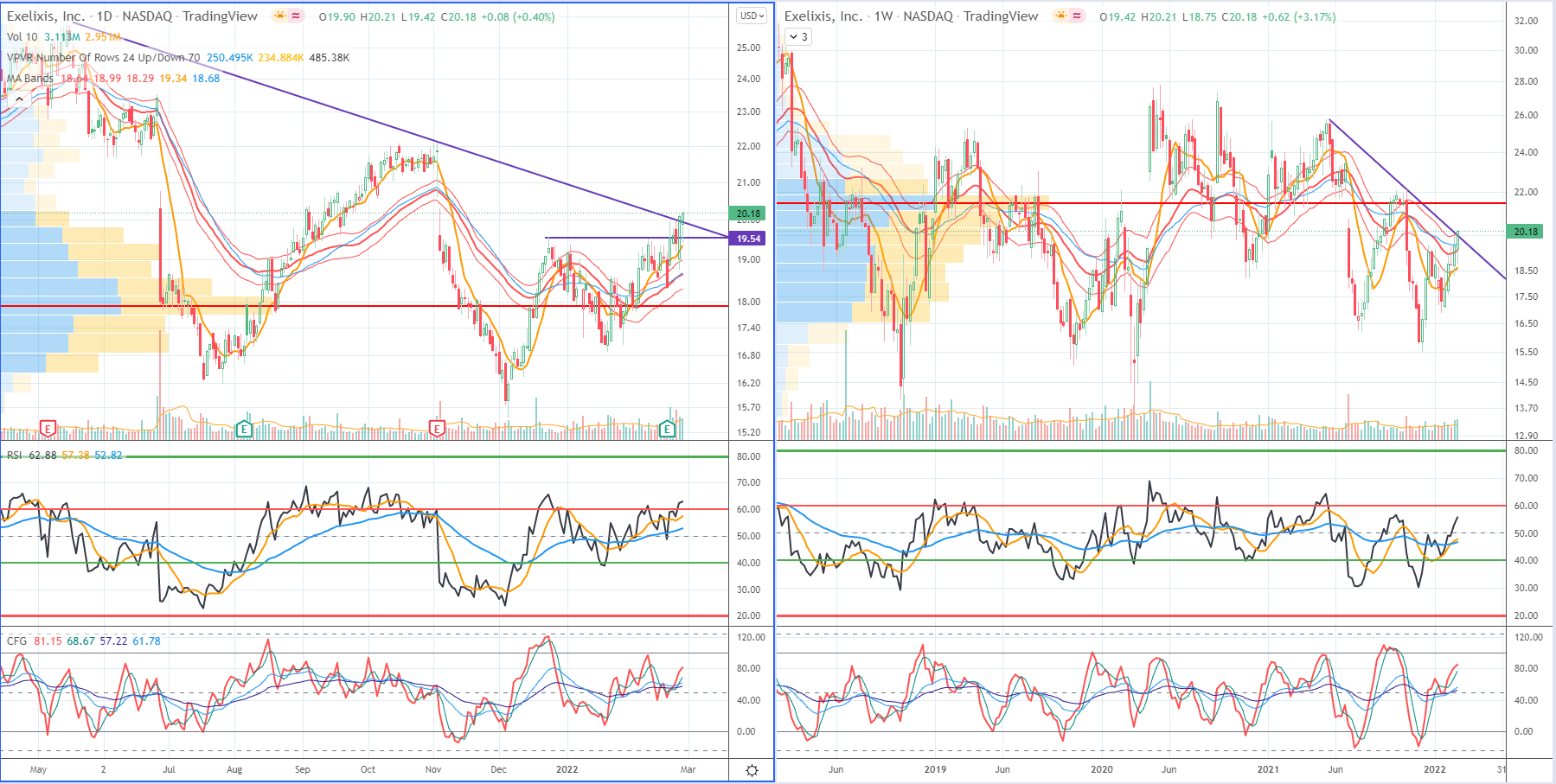 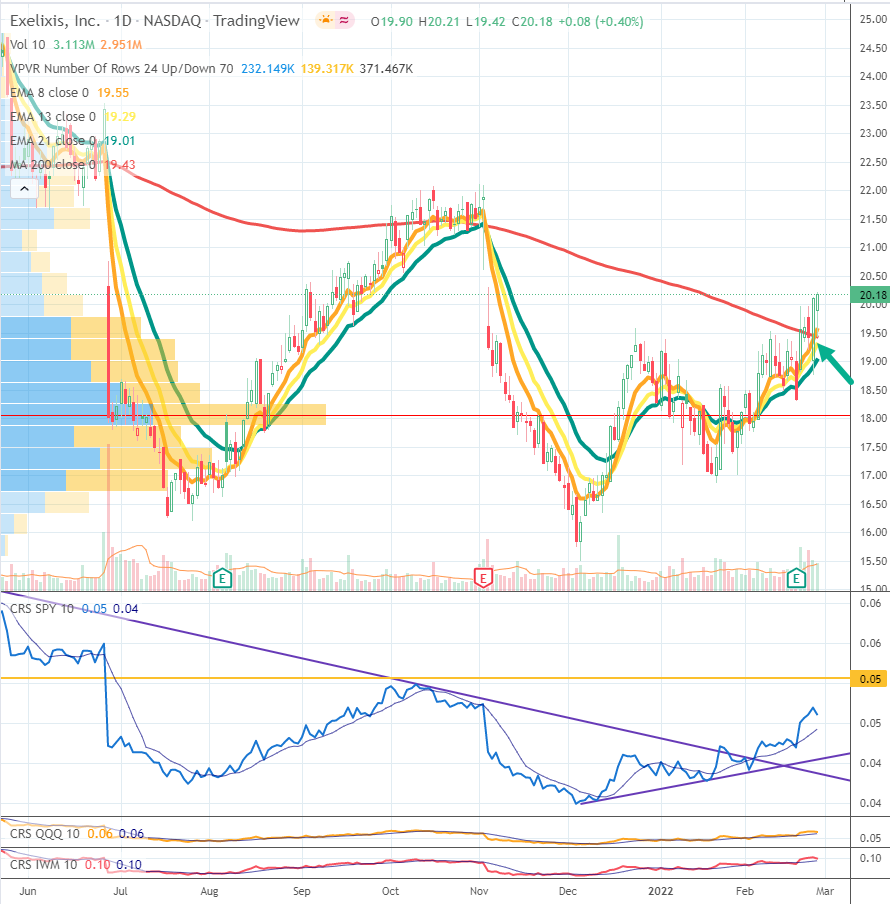 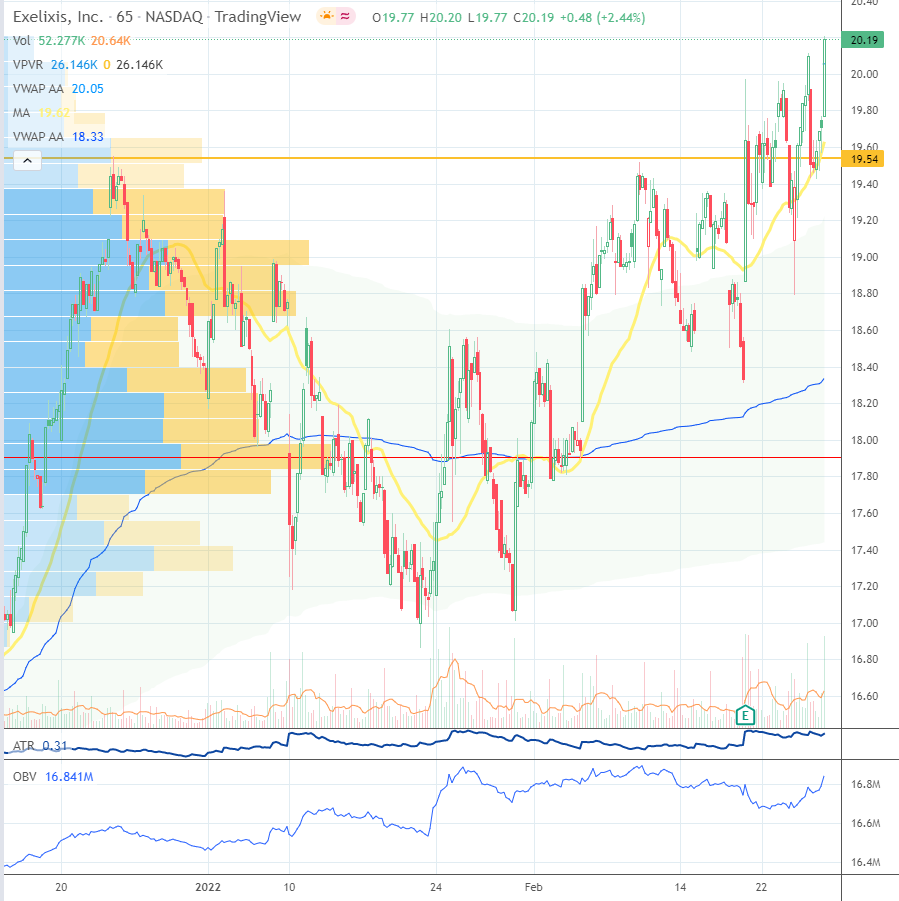 Chuys Holdings is a casual restaurants that is also trying to reverse a downtrend.  The daily RSI has forged a new RSI bull range, which it has done this a couple of times on the way down. The difference this time is the RSI and Price held on the backtest this time and are now making new highs for the move. A quick glance at the volume footprint hints there is something different going this time around. On this last pullback, it reversed right at the weekly value and hasn’t looked back. This run has now pushed it right up against the 200 day moving average and the top of the volume shelf on the bottom left chart. Friday’s close over this level sets it up to test the bit weekly polarity level marked.  This is a small name and should likely to be volatile, so take that into any trade plans developed. 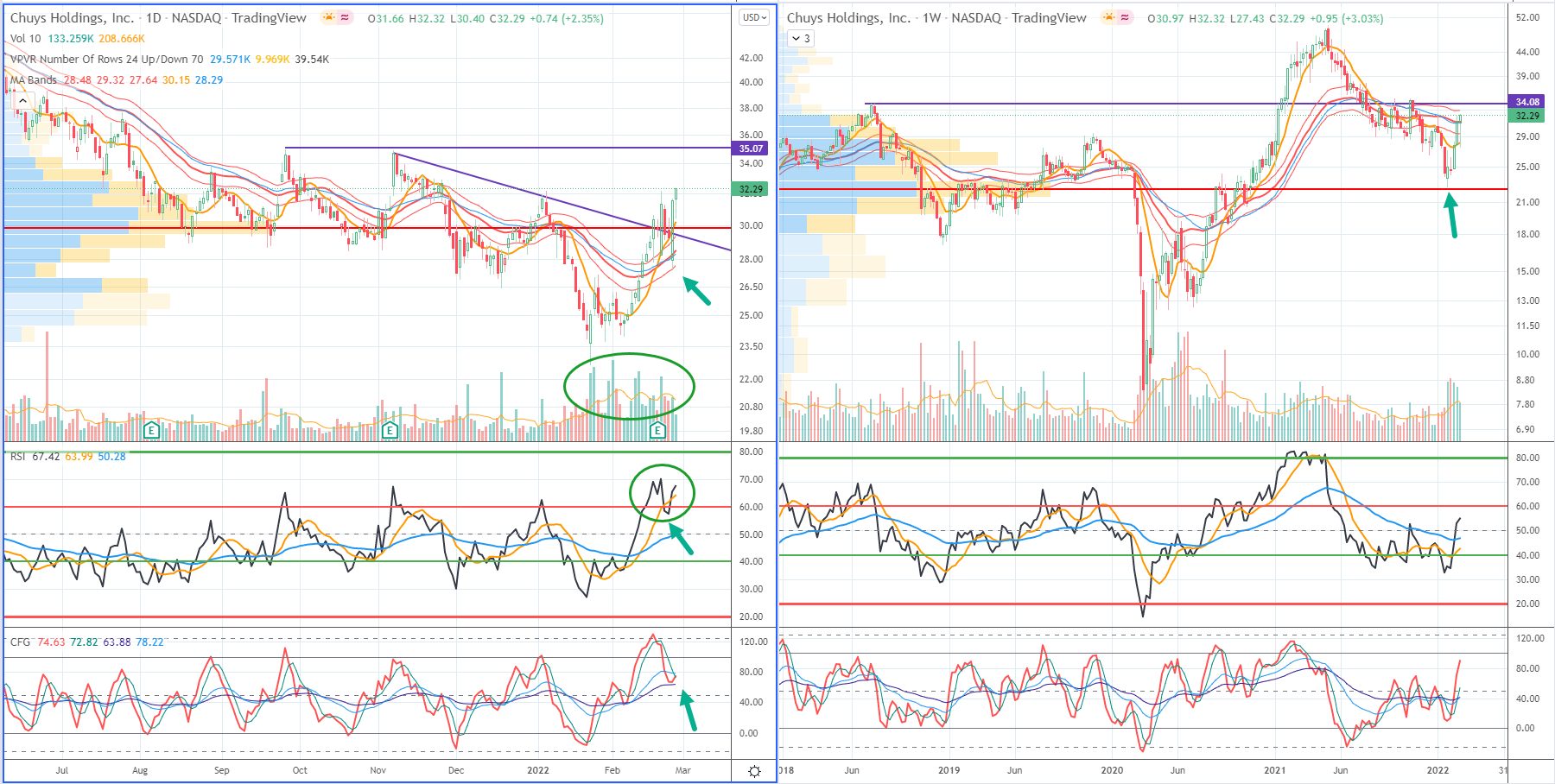 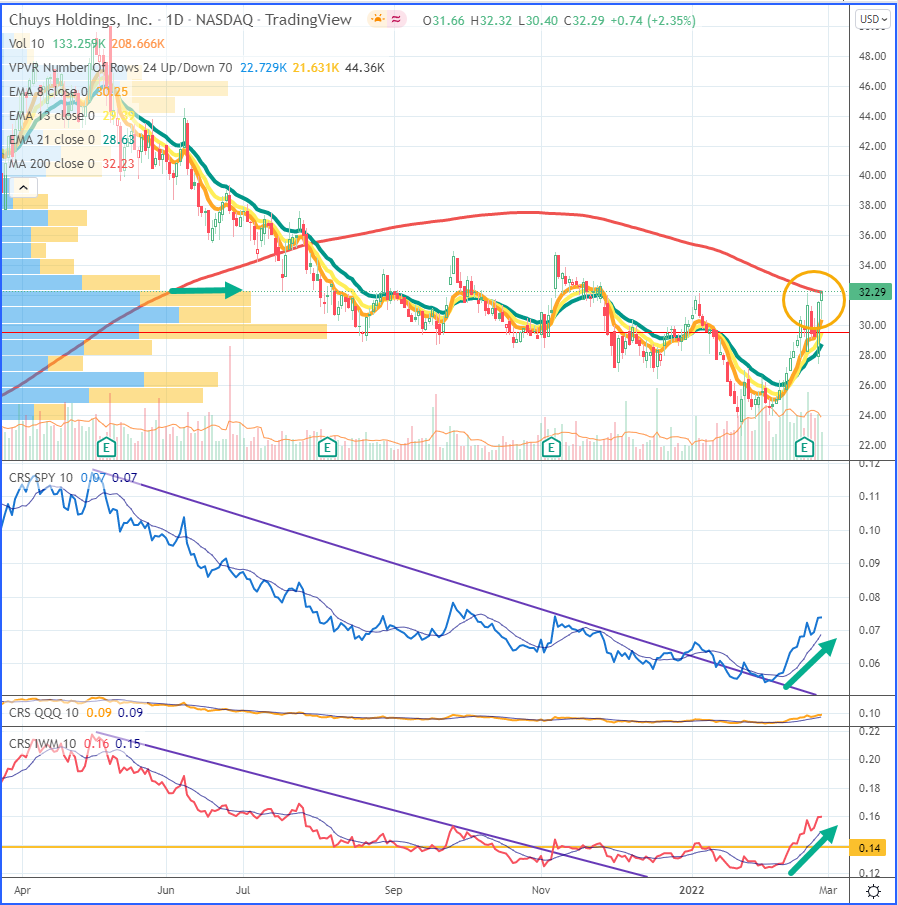 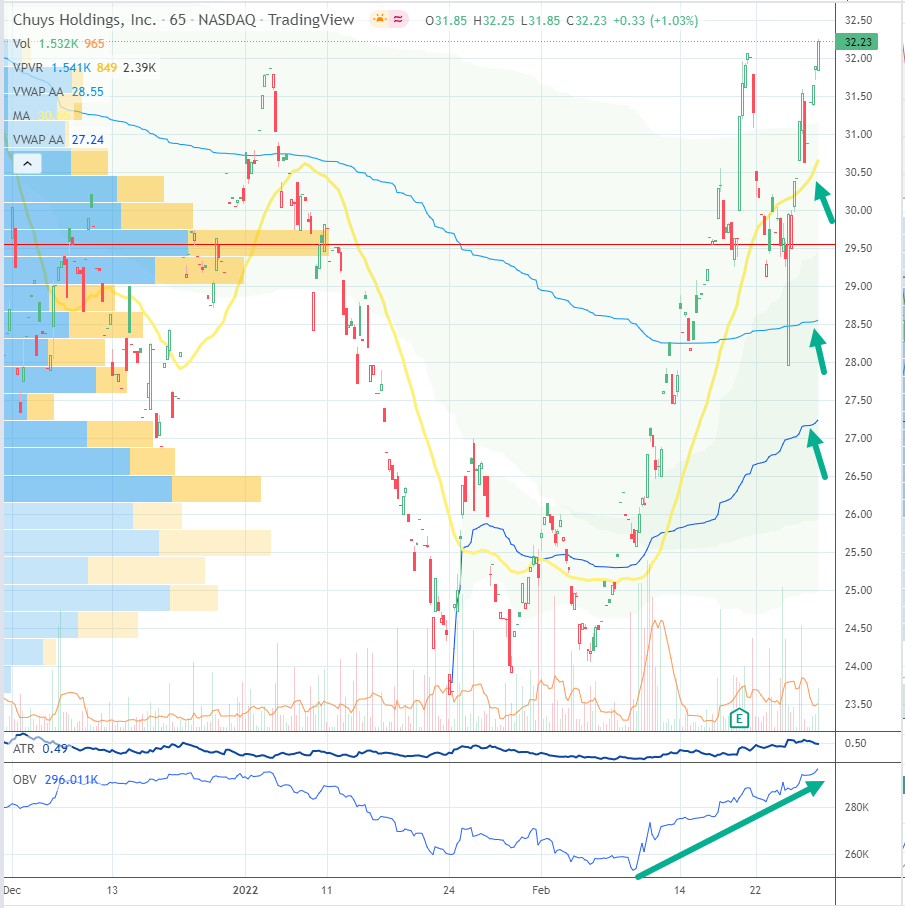 DR Horton Homes has been in a steep downtrend since the start of the year as it crumbled in the face of higher interest rate expectations. However, It currently finds itself right back at the weekly support putting in a RSI range test and so far it is passing. The daily chart definitely needs work, but it forged a failed breakdown into the end of the week and could continue its fast move higher if it can clear the short-term trendline.  The bottom left is the 65 minute chart with a fresh RSI bull range that is seeing the 9sma of RSI move over 60 (The Nitrous) which can be a nice acceleration point in a move.  The issue we face is the AVWAP versus the quarterly highs on the bottom chart and teh February Peak are lining up as a bigger level to contend with near 91.  Currently I think any close under 81.50 puts the higher scenario in question. 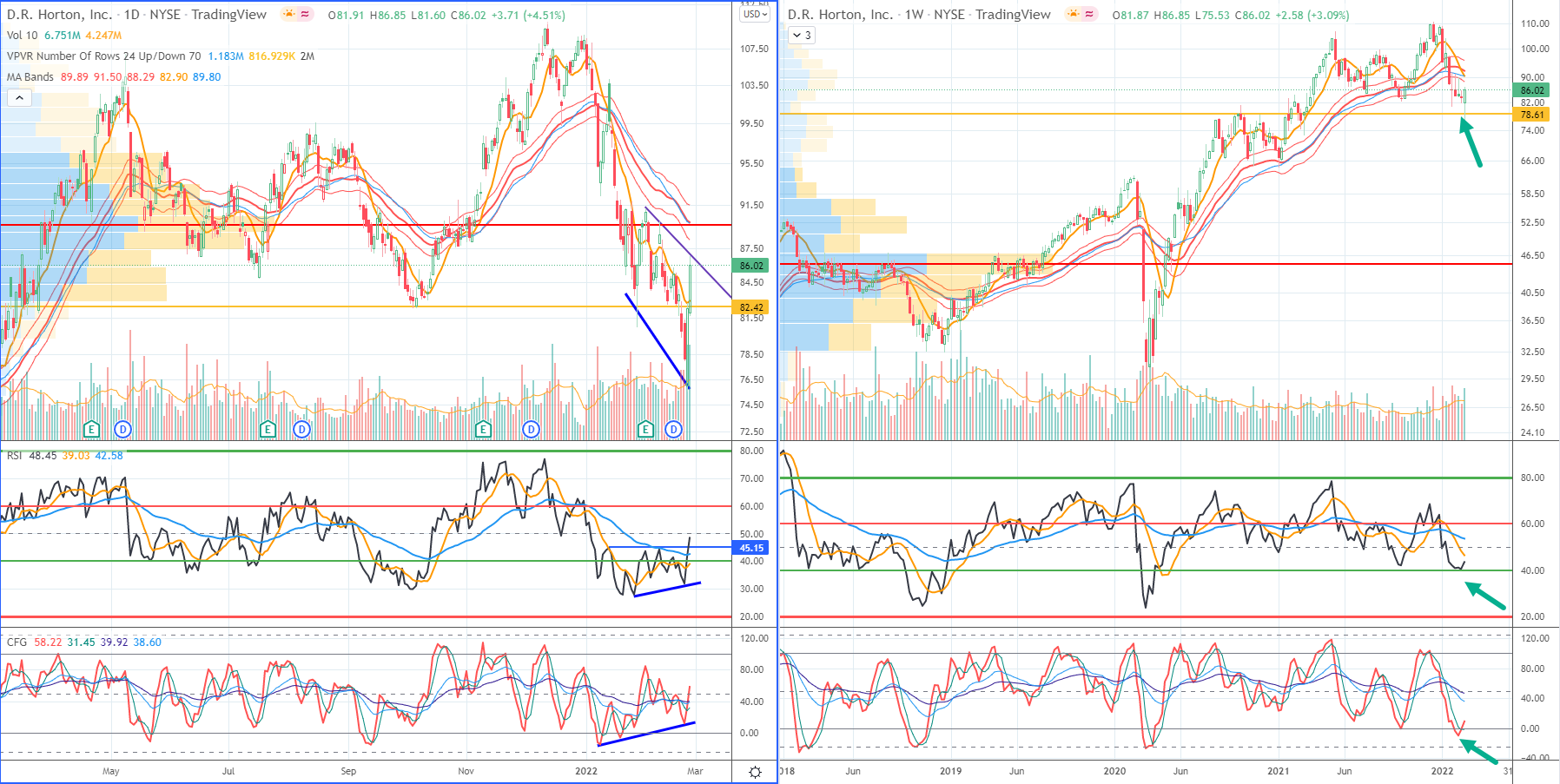 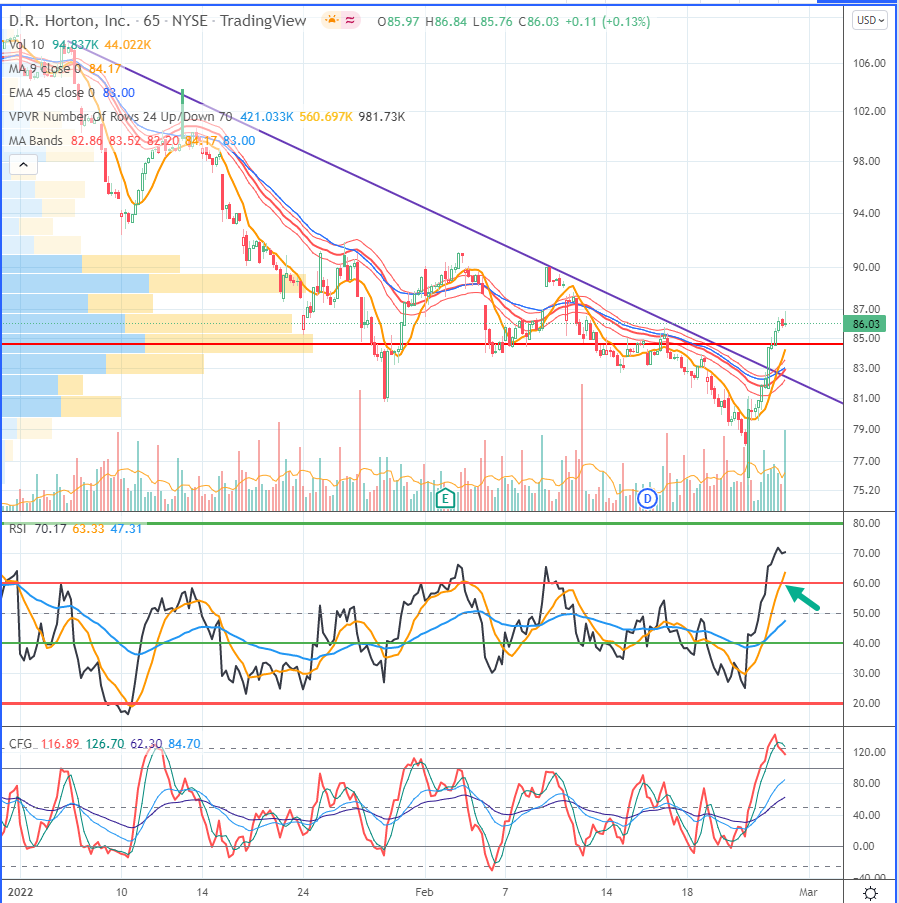 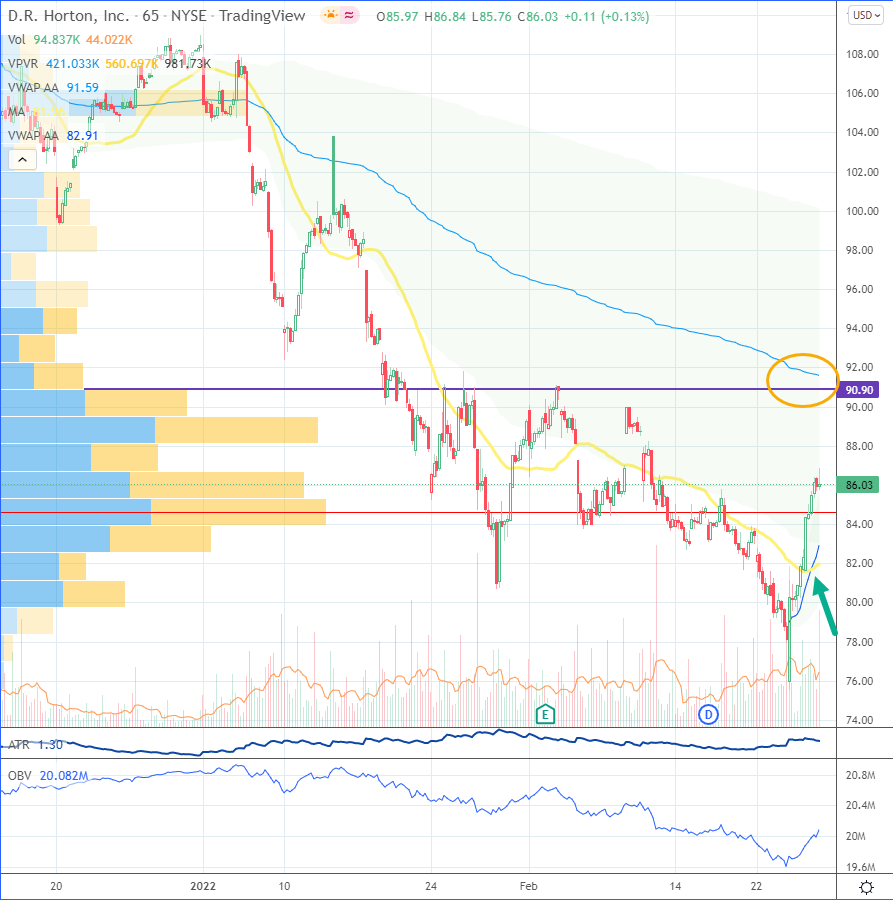 The charts and tickers above are for educational purposes and are not recommendations to do anything.  This is just to help show you what we see and then let you take it from there and do your own due diligence. Either build your own trade plan or get with your advisor or broker form one before considering any ideas above.