Onother week and more new lows for all three with big candles on the $SPY and $QQQ closing near the lows for the week.  Only the $QQQ saw higher volume for the week which is interesting but also telling for the continued growth weakness.  $IWM chart is holding up the best teh last few weeks, but RSI rolling over at 40 and below the 9sma is no sign of strength. Just less weakness, so far.  The large caps look very heavy as they continue the backtest of the big tails. A lot of downward pressure on this chart going into next week. Obviously, headlines or the world not ending over the weekend could be the potential short-term catalyst, but buyers have to be serious to change the tone here. 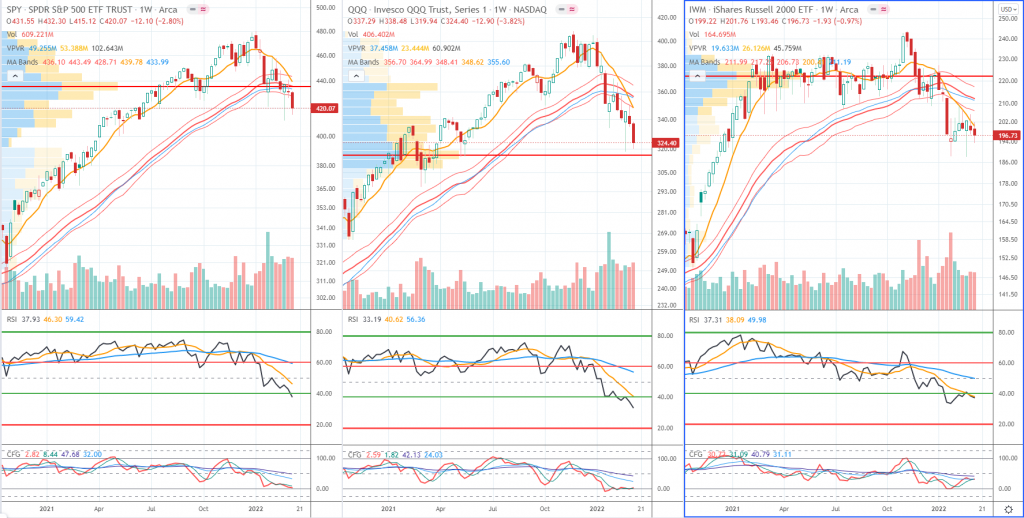 On the daily view Monday and Friday were the big candles that sealed the week, middle week made a feeble attempt to counter the weakness, but couldn’t close the week off the lows. With the exception of $IWM, which faired a little better into the end of the week. Notable that IWM hasn’t made a new closing low since the Later January lows and each subsequent one has been a higher closing low. higher lows and lower highs favor breaking in the direction of the trend, but hasn’t done so yet. All of this has to remain in the context of RSI bear ranges and below the falling MA bands. Therefore, even it is interesting things haven’t broken here and seem to bee still deciding, evidence still leans down as the markets leak. 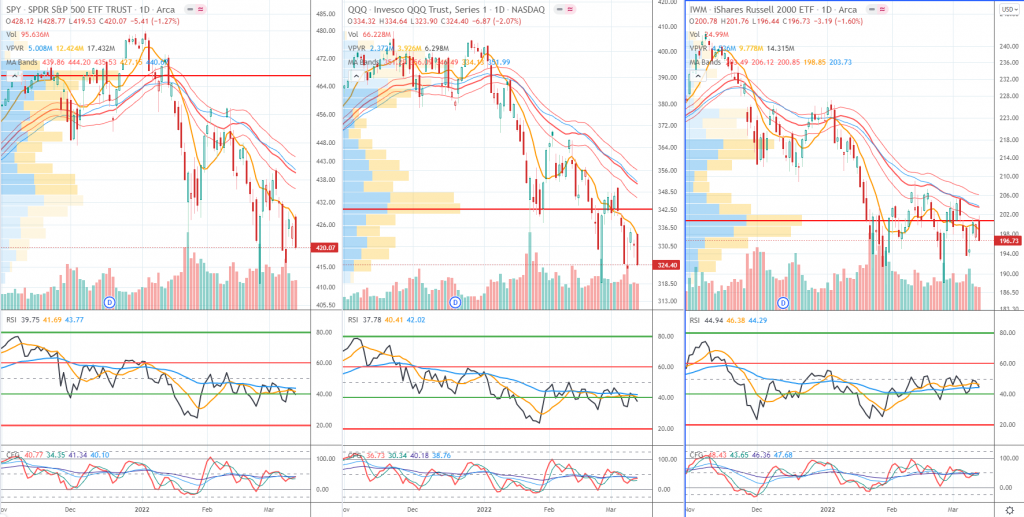 The 65min is our lowest time frame and will turn first. That is not happening here as they all got rejected at or below the MA bands mid-week.  The ongoing fighting and uncertainty didnt give much reason to step in at the end of the week and instead sold off and closed at the lows of the day.  Too many strong starts and weak closes to be optimistic that this is trying to change yet. downward is the path of least resistance going into next week here as well. One green shoot as noted above, the dialy volume tailed off decently into the end of the week. Might mean nothing, but again, There just weren’t any buyers more so than the selling was overly agressive on the whole. 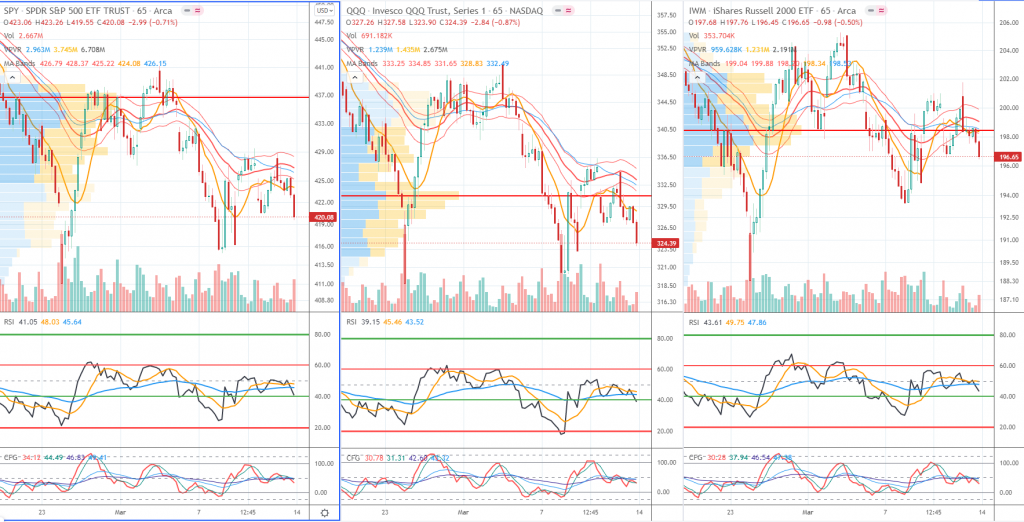 Continuing to play into that theme of small caps holding up a bit better lately after leading down, one of the the more interesting relative comparative charts we are following that we don’t see pointed out too often is the $QQQ to $IWM ratio.  This put in a double or triple top and has not broken not only the last breakout, but also the longstanding uptrend. 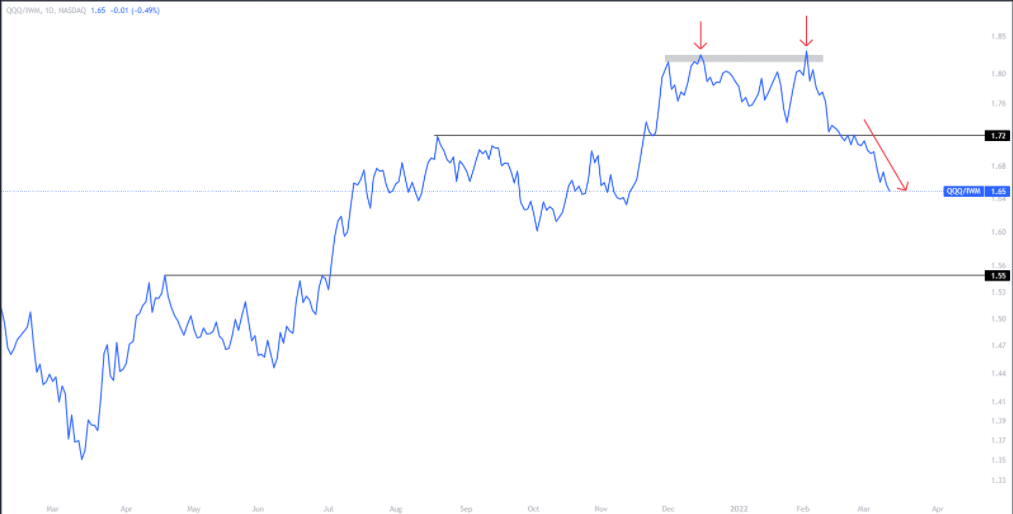 The world ETF top performers for the week are a change of pace as you can see with the actual 3 month RS scores on the table. Much of Europe rebounded strongly after the big selloffs in previous weeks, but not enough move the relative strength needle as of yet. Latin America and Middle East remain strongest RS, but put in mixed weeks with their natural resource rich portfolios. $EWP $PGAL stand out in both performance and RS movement of this group.

Intermarket ETF RS rankings not showing much change in rankings this week, and certainly none that favors equities in this situation. Commodity leadership remains overall, with $USO and $DBC losing almost 4% but still keeping the top RS spots. Much of the commodity space remained positive and relatively strong on the week in the face of a positive US dollar.

This week we separate out the measures we follow by long, intermediate and short term and look at them separately as their message are all slightly different at the moment leaving uncertainty relatively high. 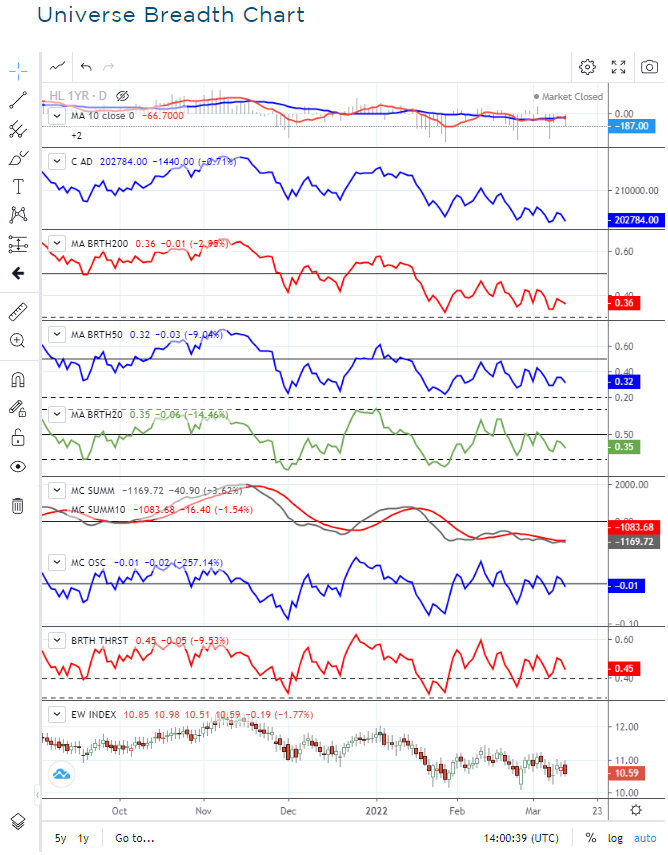 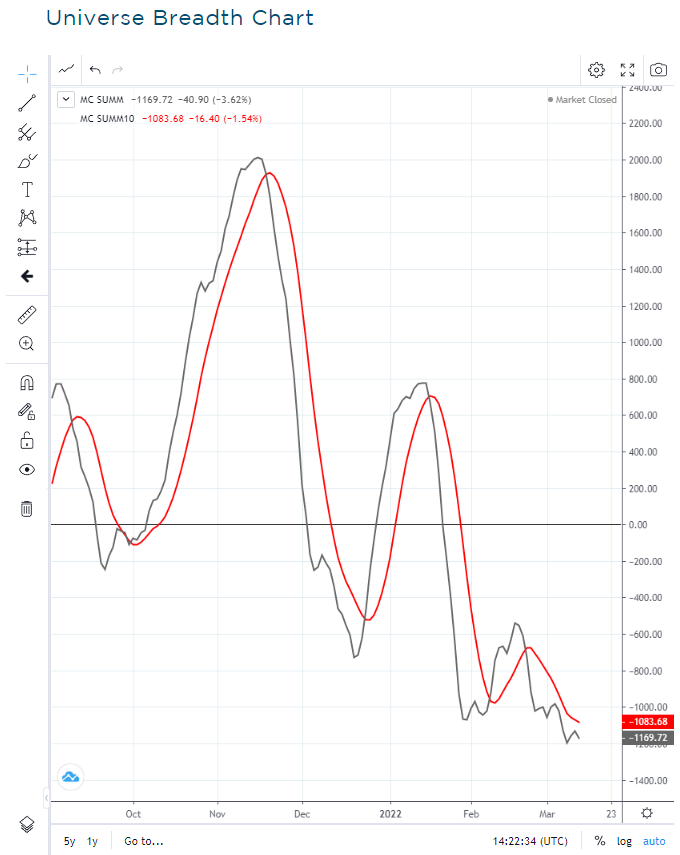 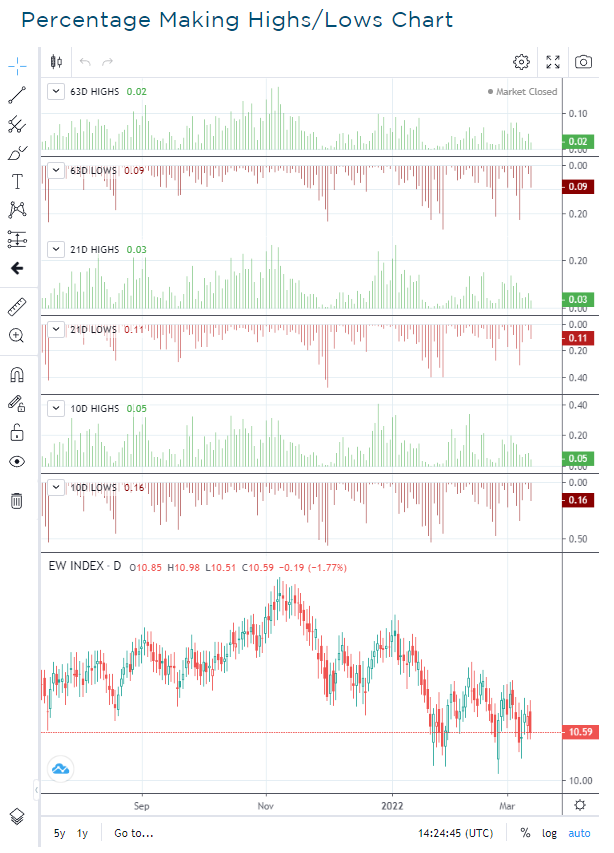 The Power Universe continues to be in a RSI bear range and below falling MA bands as the downtrend weighs, but actually paused late January and has been deciding since. Large cap selling recently has made much of the selling feel much worse for averages and many peoples Psyche.  But from the participant levels it has been consolidating near the lows for  6 weeks or so. We might be ready to resolve that down, but we aren’t there as we start the new week. 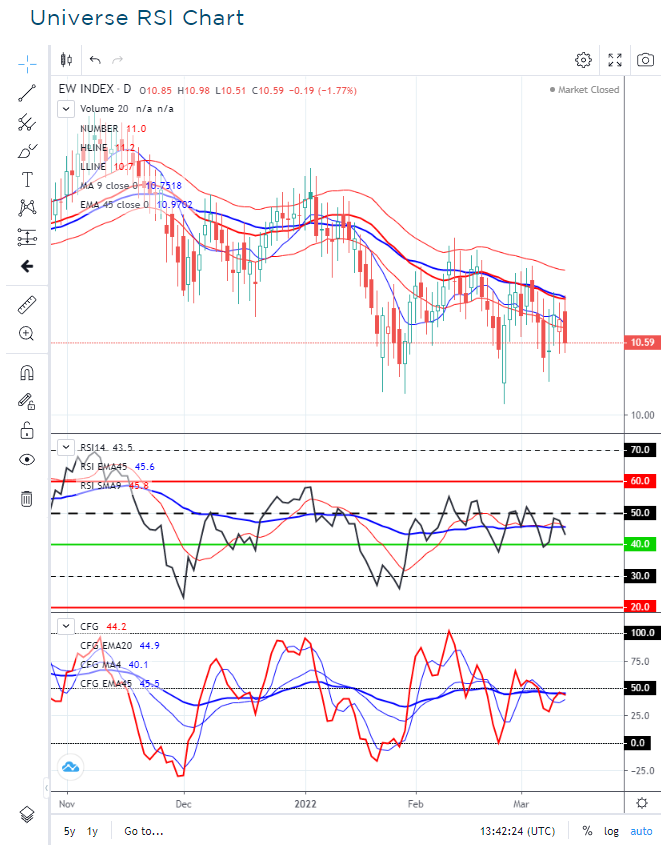 Power Sector RS Rankings did not change all that much, but a few highlights seem like they could be important. Consmer Staples weakness takes some shine off the defensive argument (along with Financials over the last month). The Commodity cycle argument is more specific and stronger than just the inflation argument which should be elevating financials along with the rest. While connected, I think these are two different themes worth seprarating. The longer term monthly RS Movers also still pointing to Real Estate and Healthcare continue to make progress along with Industrials.  In the Power Sector Review we cover a deeper dive into the subsectors within these sectors showing the most promise.

If this is turning into a commodity supercycle type period and not just a flash in the pan, we will want to keep an eye on this RS rankings list of 85 commodity ETFs. you can go there in this link and explore the tables and charts on tradingview.com when clicking on the ticker links.