Big red monthly candles are enough to negate the tails that February and March built on $QQQ and $IWM. RSIs are all still in strong bull ranges with $QQQ just now losing the 50 level.  Such a long time frame takes forever to fill out, so while they are still in bull ranges now, but there will be a lot of pain inflicted by the time these reach a bear range shift.  CFGs nearing oversold. Volume dropped on the month which is notable, but not a signal. $SPY is holding up best and has plenty of room to the MA bands near the 380 zone without endangering the RSI bull range. $QQQ a little closer already and the $IWM is testing its MA bands now. May will be interesting as back to back red marubozu candles are rare on the monthly level, If we do see that, it would be a pretty big strike against the bulls and strengthen the sellers footing a good bit. 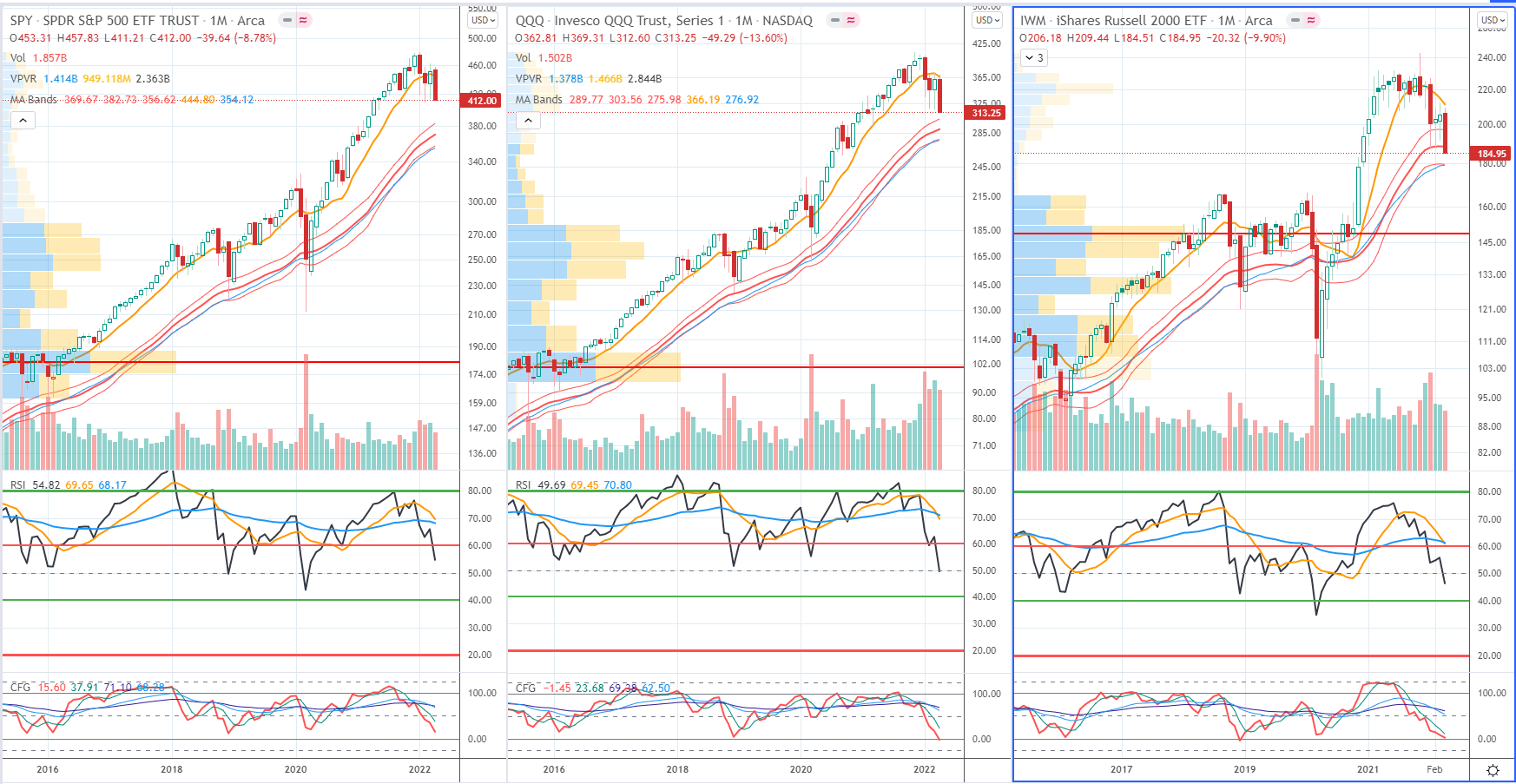 The weekly view doesn’t look any better here with all three making new weekly closing lows for the move. 4 straight down weeks with multiple marubozu candles in a row. They are less rare on this level. The $IWM and $QQQ both got hard rejections at the MA bands which are now following things down, while $SPY did clear they couldn’t hold them as the rest dragged them back down. High volume week could be starting to show some panic and capitulation, but still not extreme. There are a few spots that are starting to hit extremes, but history tells us they can go further before any relief.  At the same time, they don’t have to and 5 down weeks in a row is very rare, so we stay on high alert for a change in the near future. Any bounce will be treated as short term, then assessed to see how it builds on itself. 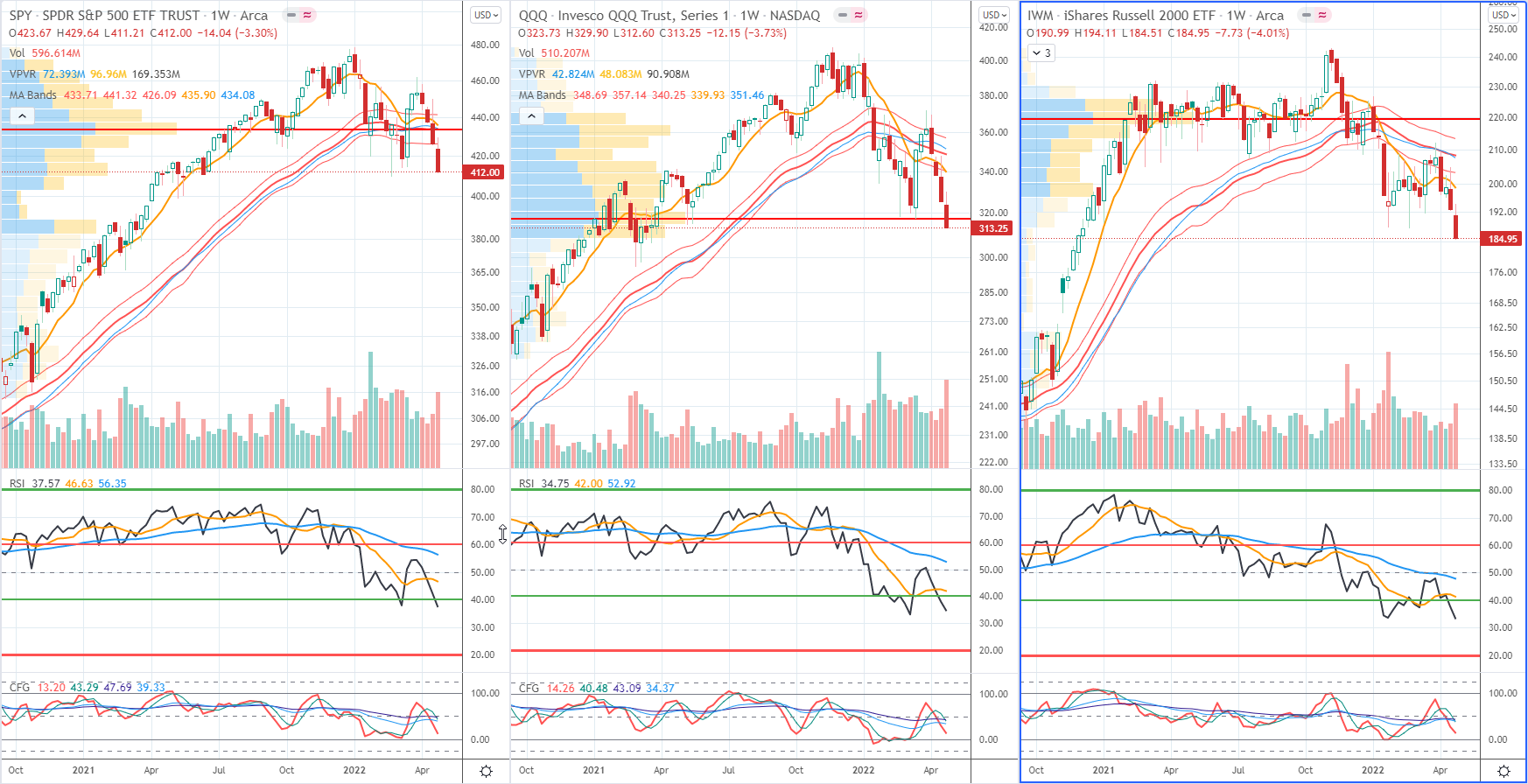 Even the daily level made new closing lows across the board to close the week.  That is not good optics no matter how you slice it. None are particularly oversold on this level either, so there is more room to the downside. That is what we should expect going into the week and if panic intensifies it could bring more velocity; whether we get what we expect or not is up to the markets.  We do have a potential (it’s not a divergence until we see another pivot) divergence setups building.  Longer term bull divergences are printed, but a surprise upside Monday or Tuesday would fire a 3period very tight divergence which could ignite things to the upside for a few days to start. This is a small probability, but keep it in the back of your mind. 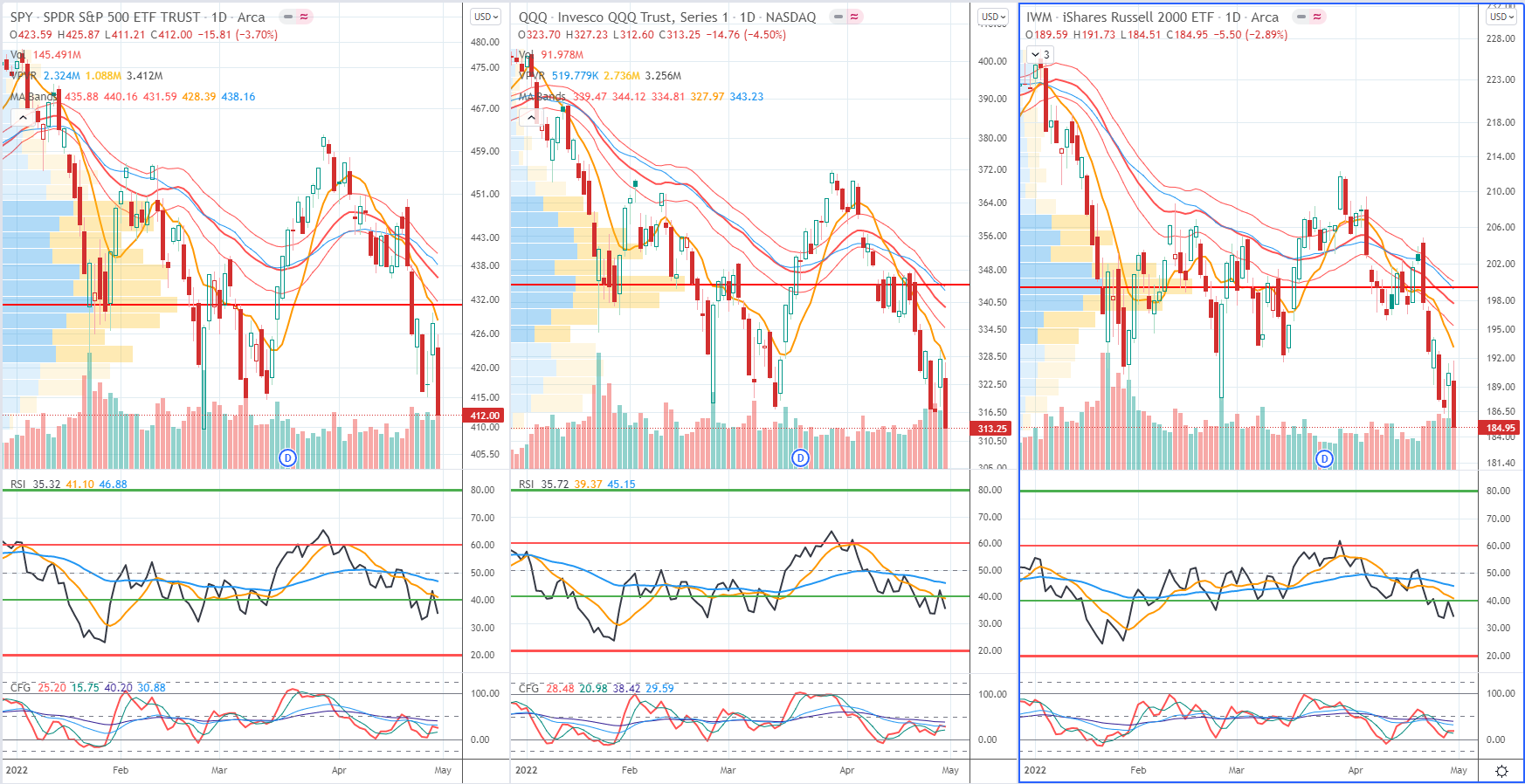 The 65minute level is not telling any different story. It also has all three in RSI bear ranges and getting rejected at their MA bands on this level too. $SPY $QQQ both closed at new lows here while $IWM held slightly above the early week lows. No buyers anywhere yet. Bull divergences may show a little nibbling, but none are biting yet and the sellers have been overwhelming any attempts. CFGs are all back near the flatline puts them oversold enough for a significant short-term pivot, but can get much lower if needed. Nothing on these to hang your hat on if you are a bull. Sellers control and have all month as we probe for the level that buyers are willing to be more aggressive. 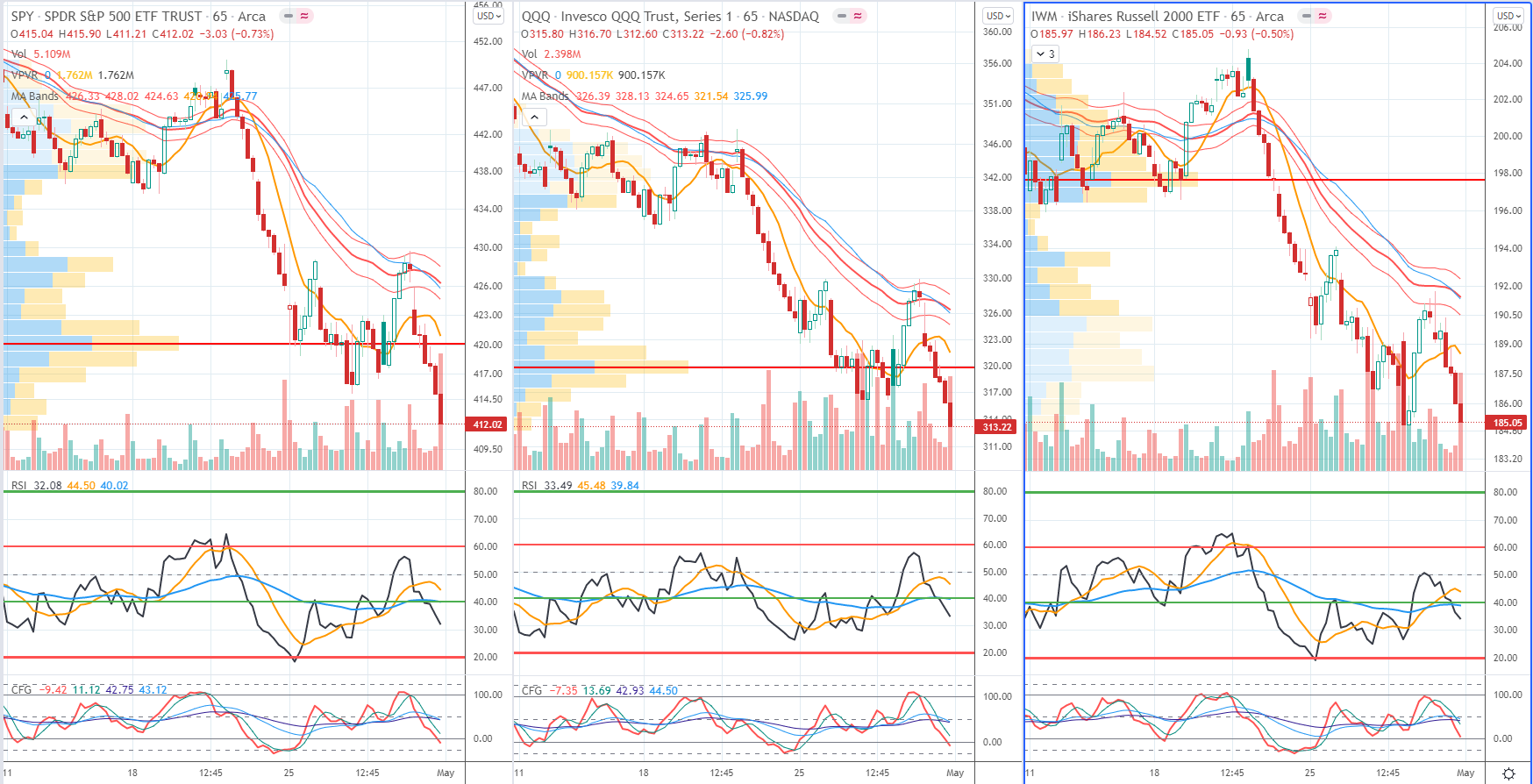 It was a tough week in most spots around the world with most of the leading countries down, albeit many less than the $SPY. The second shot pulls out the 5 of the 60 we follow that eked out a gain. No showing from any domestic ETF at this juncture.

Still not much change on the Intermarket ETF front.  $UUP does continue to climb since its breakout, but that is not a great sign for the equity complex. Commodities still surround it with a little Real Estate sprinkled in.  $JNK suprising also on the move over the last week and month, but the rest of bonds are stuck a the bottom dancing with the equity ETFs. This view continues to lean commodities over equities going into the new month.

Size and style is still clearly value driven, but this week and really month there was really no where to hide, except cash. The tilt moved away from Megacaps suggesting the Generals were finally being targeted.

Bonds continue to be a sore spot as well. Velocity of the move down is historic and shows the real inflation fears spiking. These moves in the longer durations over the last quarter are pretty crazy. This will likely peak and come back some from near these levels. It’s hard to say when and how far, but this stretch is extreme and should settle sometime this spring. Maybe even start after the FED meeting this Wednesday. Once they get another raise on the books, it could ease tensions a little. Again, if it doesn’t that is important info as well.

The Power Universe equal weighted index also made new closing lows for the move, which is no surprise. Just because they targeted Mega caps as well this week, doesn’t mean the selling wasn’t broad, it was. RSI here is in a bear range and back below the MA bands. There are multiple divergences here too, but nothing that price wants to follow yet. Downside is the path of least resistance, but there remain a couple of intraday lows that could still matter here and in the major indexes we need to pay close attention to just in case. 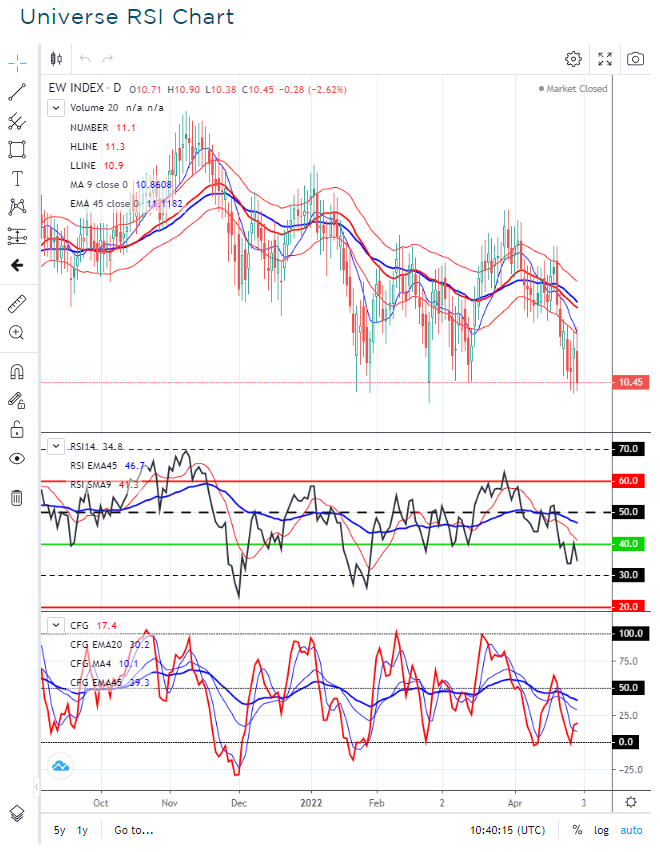 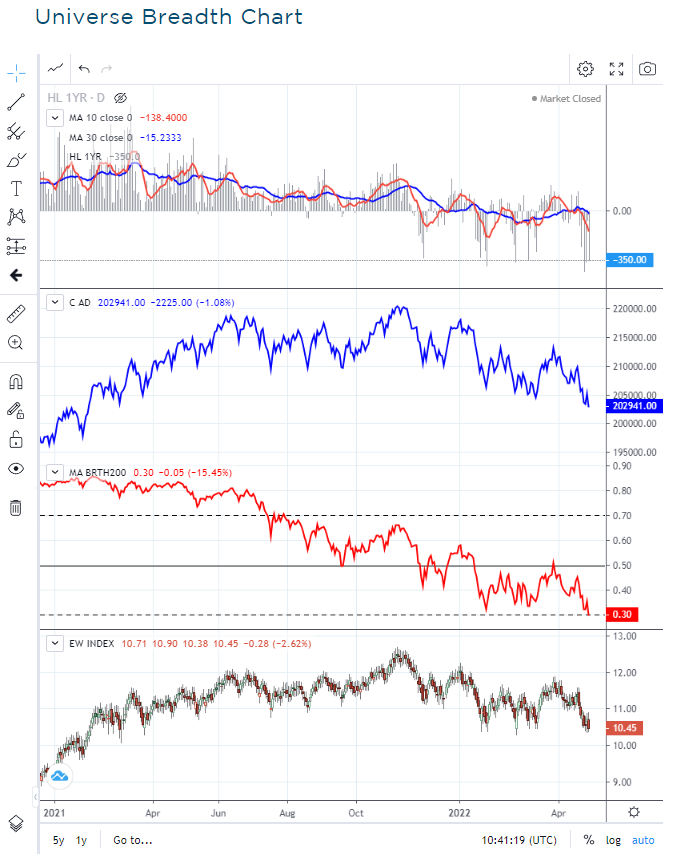 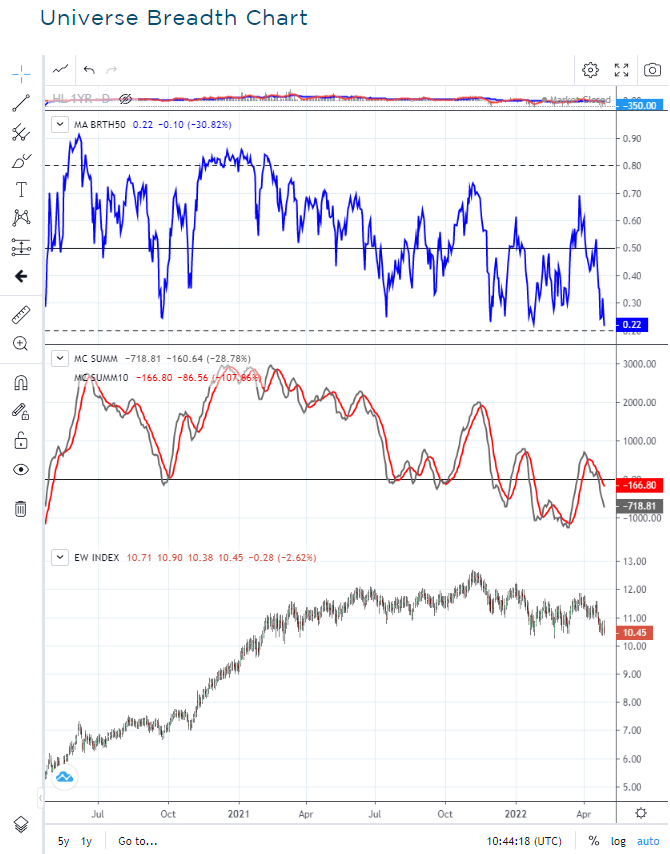 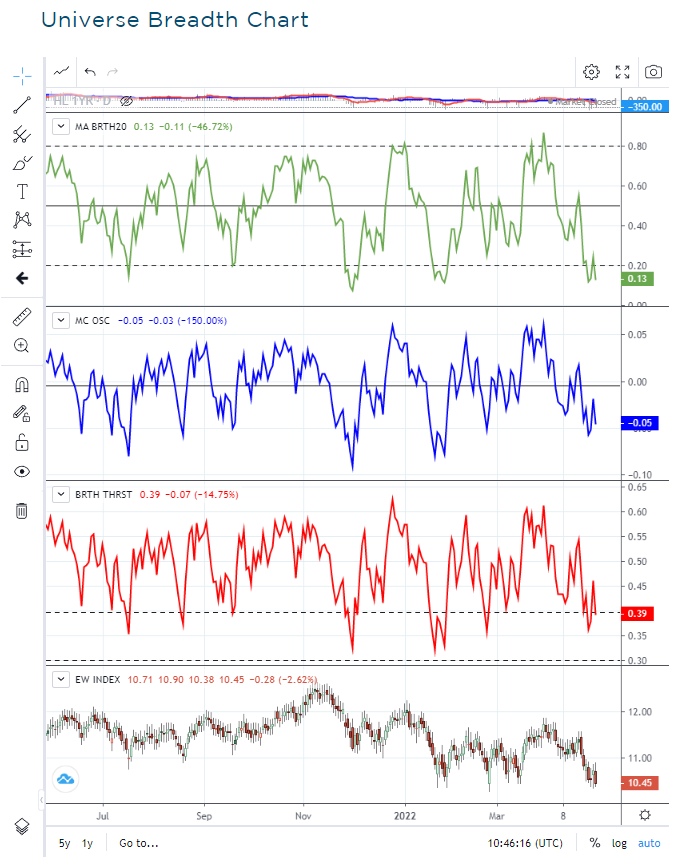 There were no winners this week, only smaller losers. Again, did I say week or month? Either would work here. From a relative strength standpoint, only Utilities, Information Technology and Financials stand out as movers. However, I would say Tech and Consumer Discretionary are the two most interesting over the last couple of weeks as they have been worst performers on the way down and seem to be gaining RS in this recent retest on the major indexes.

Markets were relentless this week as they quashed every bounce attempt within hours, other than Thursday, which made some headway, only to get whacked on Friday to close the week. The FED week should play a decent role in sentiment this week and likely to relieve some pressure once it is over on Wednesday, but until then, Don’t expect much different from what we saw this week with back-and-forth type action as we move into next week. The major trend is down and favoring the sellers until buyers see more value and prices reach a level they are willing to get back involved. None of the charts above are showing any evidence buyers are there yet and instead, sellers continue to find reasons to sell more. Now that we are at hard retests that look like they are failing, there are few reasons to step in front of this for anything other than scalps on the long side. There are many short setups as markets sit on this ledge if you are nimble enough to do that, but shorting is harder at this point of the move. If buyers decide to show up soon take it slow and make sure your plan is prepared for loads of volatility. Most bounces will fail early, even in oversold environments; but every new leg higher starts with a bounce and then posts milestones to gauge or get involved along the way. We never know until we look back later, but there are tons of clues along the way if we pay attention and are open to seeing them.