The weekly charts went home with indecision and relatively small bodied candles considering the volatility the markets saw. The downtrend is continuing and the tails show sellers thwarted the attempt to get back into the previous ranges. The expected relief after the FED event was over was short-lived and did not change much, if anything in the outlook. Volume was very high this week, showing the battle within was intense. The volume shelf at this level for $SPY and $QQQ should be watched into next week for reaction. $IWM is in a different spot as it already lost its value a while back. Nothing encouraging on this level. 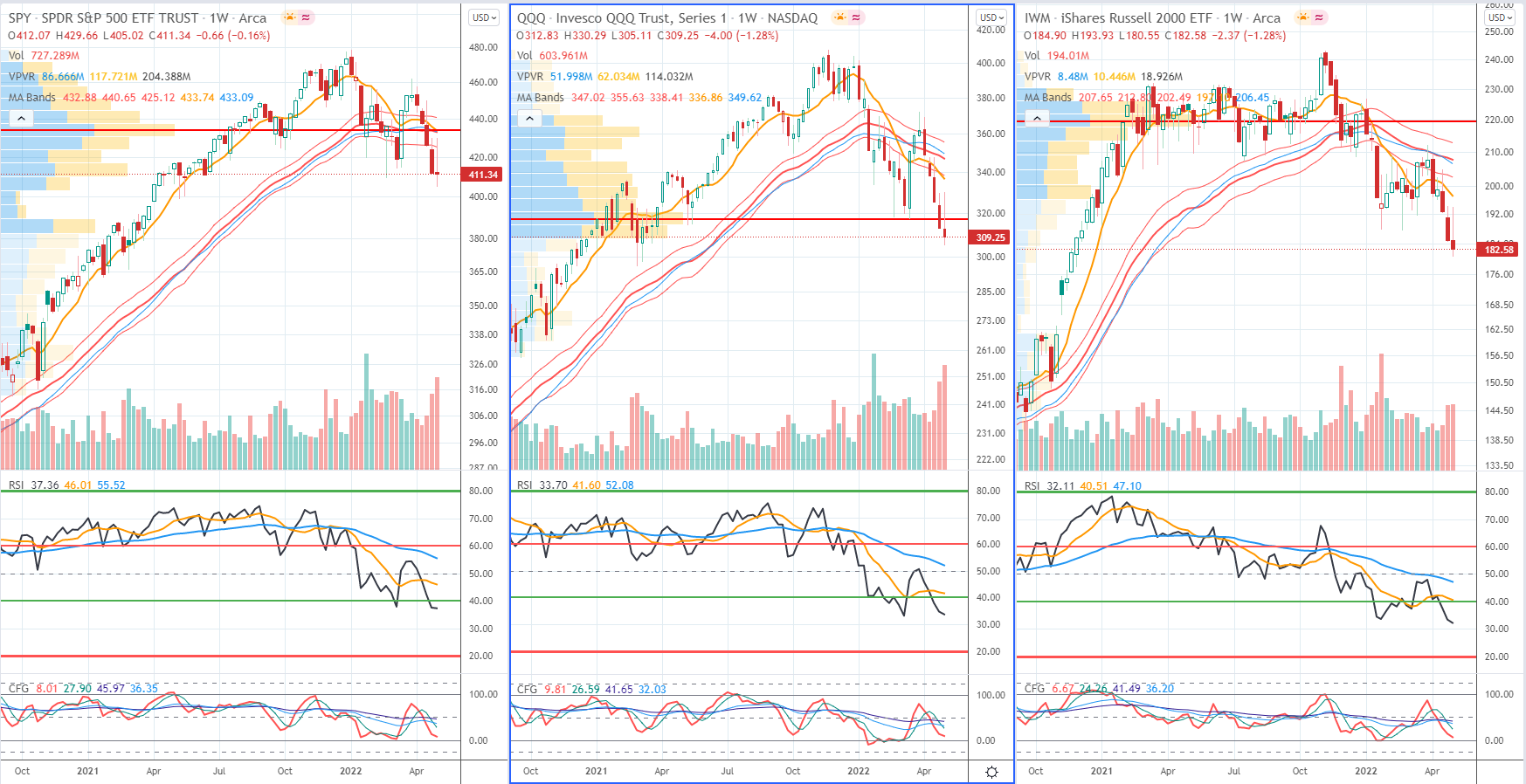 The daily view shows the battle was definitely there and has been for almost two weeks now. The sellers took hold Thursday and Friday in what felt more panicky, getting closer to some capitulation. That doesn’t mean we can’t fall further and looks like we will if pre-market action holds.  400 on $SPY and 300 on $QQQ are big round numbers and might become magnets if sellers come out swinging again. How they react at those levels should be a good tell if we get there. It felt like sellers were getting exhausted into early week and the markets rallied hard out of the FED meeting like the buyers were coming back. However, that was a big head fake as those buyers lasted less than a day and Thursday saw no follow through, instead, got immediately sold hard. It really did feal forced, like a fund or funds were liquidated, but that is just speculation for now. We will hear later if that was the case. In reality there are just no buyers convicted enough to step in yet. A buyer’s strike as I have heard it put before. We are still seeing long and short-term divergences form which has us watching for short-term reversals; but price action continues to ignore them for now and can for a while. This does show the downside pressure has been waning, but again, until buyers decide to return, nothing will change of significance as the markets can fall on their own weight in these environments.

The intraday view we use is the 65 minute chart.  This level is also showing some tempting divergences over the last month as the markets moved sideways.  They even broke into RSI bull ranges into Wednesday’s surge, but then got sold right back into the RSI 40 level.  This has them hard testing that new RSI bull range too soon and gives a much higher rate of failure. I am writing this Monday pre-market and it doesn’t look good for these bull ranges.  Par for the course right now I guess.  As I always say, this time frame will change first, so any sustained RSI bull range down here would be our first clue of a change in character in the broader indices. 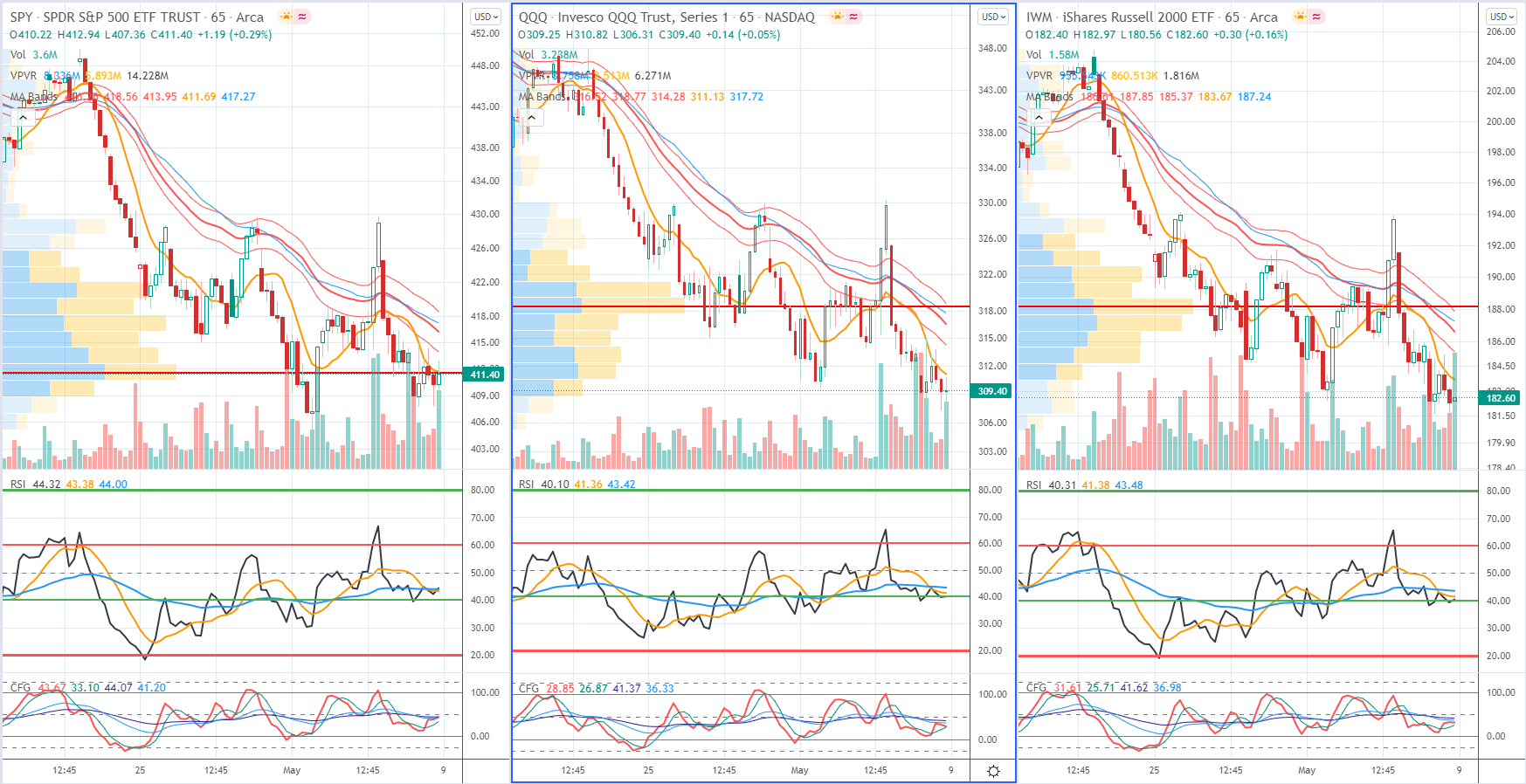 Not much gaining out there this week, so I decided to show the RS Gainers and RS losers for the group. Note a lot of these rankings have changed a lot over the last month.  Definite shift in leadership. It was a case of who lost less through, none actually showing gains over the time period.

The Intermarket view isn’t improving much.  $DIA is in the top half of the list all alone.  $SPY gained some RS closing just about flat for the week with was an accomplishment it seems. $IWM and $QQQ are still anchoring the equity group. Our view is all the equity ETFs need to be in the top half of this list for us to view the environment as favorable for equities over the near-term.  We are not there. Commodities still lead with $UUP right up there in the mix. That is not a normal alignment and shows there is definitely a lot out of whack in the global economy right now.

Size and Style view cleared up any confusion that value was waning this week. Value is where all the gains were this week, but it wasn’t enough to offset the losses on the growth side which were ugly.

The Power Universe equal weighted index closed Friday under the January lows and another new closing low.  We see the long to short-term divergences here as well, but so far they are just a heads up to be open to a false breakdown.  At this point, I say be open to it, not expect it. 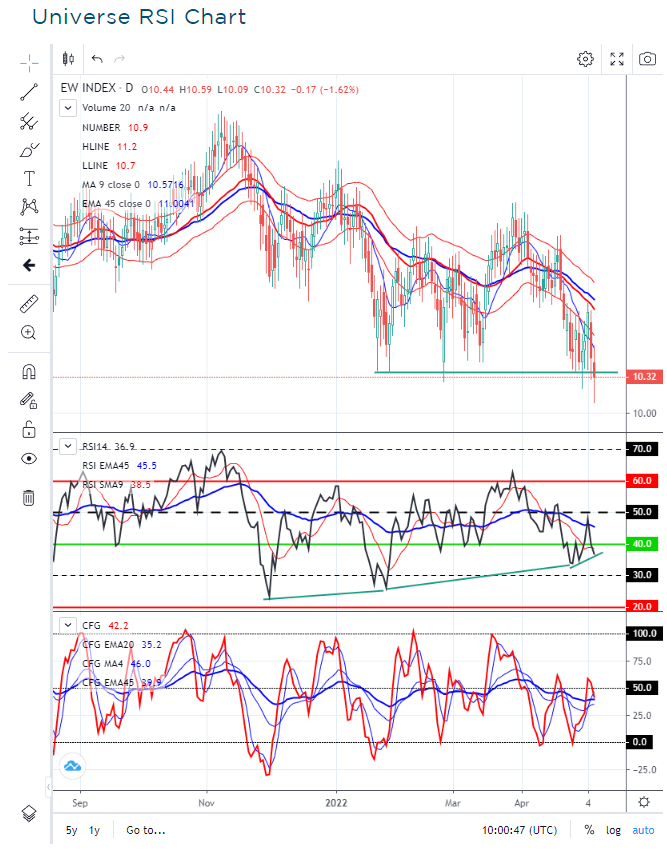 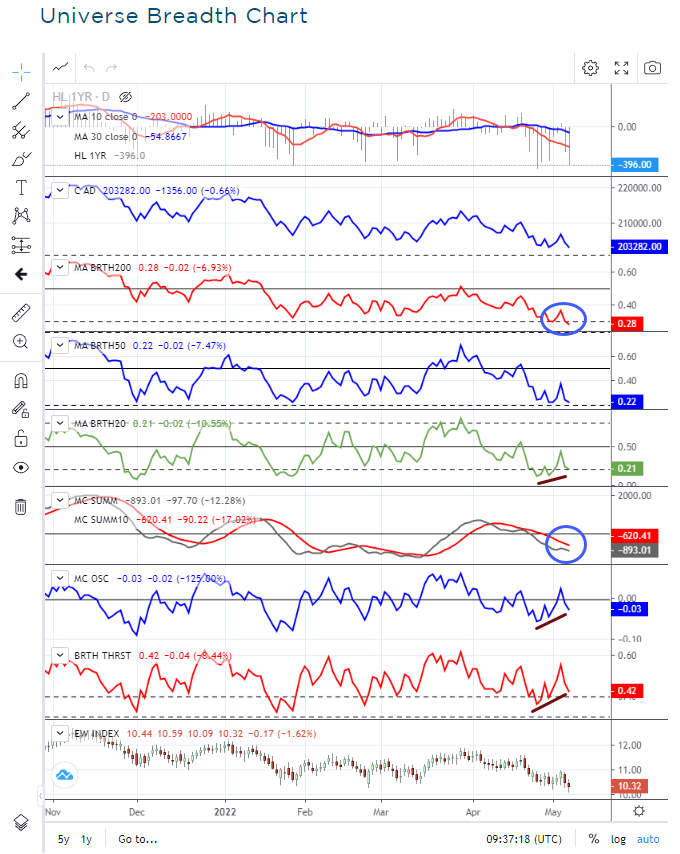 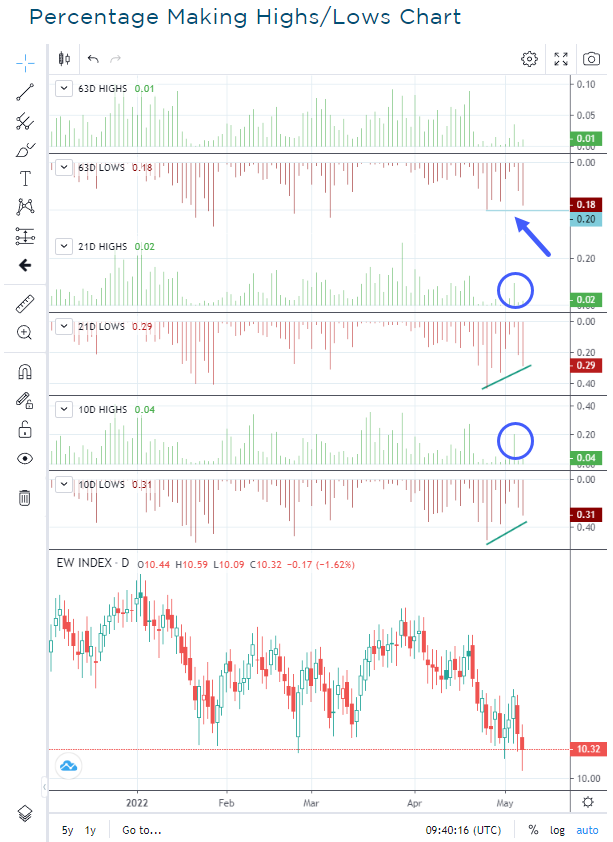 The Percent Making New Highs and Lows (PMNHL) has been diverging as well for the last week or more and did so again into the close of the week. This goes along with the other short term breadth divergences and may end up meaning nothing, but my experience still tells me to take note. What I find most interesting here is the longest measure of 63day (1 quarter) highs is the closest to making a new low for this move, but is still a good clip above the January lows.

The two shorter measures (10day and 21day) did print more new lows than in January a couple of weeks ago before it started diverging. Also worth noting the Wednesday move was very broad and has some solid numbers behind it, but the one day spike could convince those elusive buyers we have mentioned.  These are usually signals of pressure waning, but if there is an underlying event that is forcing these sales (liquidation). These numbers will get stretched again quickly and put an end to the divergences here soon.

Energy came back strong this week standing out from the crowd as the only sector with gains across all the timeframes on the table. Utilites were also positive after a hard pullback to potential support. If it can hold and reverse back higher it could provide some good opportunities while still being a warning for the markets as a whole. Financials are also trying to come off the bottom as far as RS this week and over the last month. Doesn’t mean they are leaders yet, but may be trying to put some stakes in the ground here after a tough quarter acting more like growth stocks than one might expect in this environment.

I am writing this on Monday morning while the futures continue to sink, and noise is very high. From that perspective it looks like we will start the week continuing down, but it could be another long and wild week. We are still close enough to those previous lows that buyers might fight for it at some point. I learned from many older swing and position trading technicians that taught the “3 or 3 rule” which says a significant chart level is confirmed broken after 3 days (bars) or 3%. Today’s day trading mentality rarely gives anywhere near that much room, but most of us really aren’t daytraders. This rule was mainly for daily charts and won’t always convert to different timeframes, but still gives some room for overshoots and stop runs. That is the optimistic view. The path of least resistance is certainly down, so once again, we can’t expect it, but need to be open to another short term reversal if we hit breadth extremes (washout levels) and see some real panic here very early week.

Also look for our Power Sector Review for a closer look under the hood. You can find these and other charts on our Stocktwits and Twitter feed @Power1nvesting and throughout this site. Anything mentioned is for education purposes only and are not meant to be recommendations to buy or sell any securities. Please see the full disclosure in the footer for more information.